Masaharu Ueda (Japanese: 上田正治) (born January 1, 1938) is a Japanese cinematographer. He worked several times with filmmaker Akira Kurosawa. He was nominated for the Academy Award for Best Cinematography for his work in the film Ran (1985). 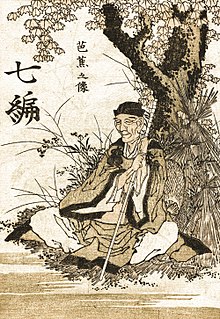 Matsuo Bashō, born Matsuo Kinsaku, then Matsuo Chūemon Munefusa, was the most famous poet of the Edo period in Japan. During his lifetime, Bashō was recognized for his works in the collaborative haikai no renga form; today, after centuries of commentary, he is recognized as the greatest master of haiku. He is also well known for his travel essays beginning with “Records of a Weather-Exposed Skeleton” (1684), written after his journey west to Kyoto and Nara. Matsuo Bashō's poetry is internationally renowned, and, in Japan, many of his poems are reproduced on monuments and traditional sites. Although Bashō is justifiably famous in the West for his hokku, he himself believed his best work lay in leading and participating in renku. He is quoted as saying, "Many of my followers can write hokku as well as I can. Where I show who I really am is in linking haikai verses."

Ueda Akinari or Ueda Shūsei was a Japanese author, scholar and waka poet, and a prominent literary figure in 18th-century Japan. He was an early writer in the yomihon genre and his two masterpieces, Ugetsu Monogatari and Harusame Monogatari, are central to the canon of Japanese literature. 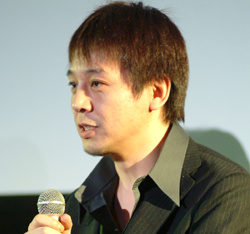 Hitoshi Sakimoto is a Japanese video game music composer and arranger. He is best known for scoring Final Fantasy Tactics and Final Fantasy XII, though he has composed soundtracks for over 80 other games. He began playing music and video games in elementary school, and began composing video game music for money by the time he was 16. Sakimoto's professional career began a few years later in 1988 when he started composing music professionally as a freelancer, as well as programming sound drivers for games. Five years and 40 games later, he achieved his first mainstream success with the score to Ogre Battle: The March of the Black Queen. In 1997, he joined Square and composed for his first international success, the score to Final Fantasy Tactics.

Manabu Namiki is a Japanese video game composer who is primarily known for his work in shoot 'em up games. He has worked with game companies such as Allumer, NMK, Raizing and Cave. In October 2002, Namiki, Hitoshi Sakimoto, and Masaharu Iwata founded Basiscape. The trio had worked for NMK for sound production under the title "Santarou" before the employment, so he started to assume the handle when appearing on the chiptune scene and performed live at the Japan Chiptune Tour 2004. He is currently the sound director at M2.

Fumito Ueda is a Japanese video game designer. Ueda is best known as the director and lead designer of Ico (2001) and Shadow of the Colossus (2005) while leading Team Ico at Japan Studio, and The Last Guardian (2016) through his own development company GenDesign. His games have achieved cult status and are distinguished by their usage of minimal plot and scenario using fictional languages, and use of overexposed, desaturated light. He has been described by some as an auteur of video games. 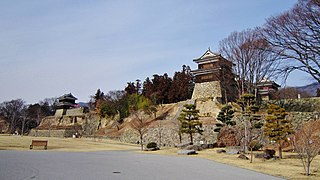 The Professor's Beloved Equation (博士の愛した数式) is a Japanese film released January 21, 2006 and directed by Takashi Koizumi. It is based on the novel The Housekeeper and the Professor. 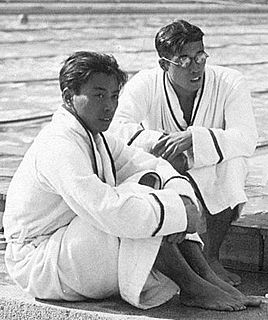 Masaharu Taguchi was a Japanese freestyle swimmer. At the 1936 Olympics he won a gold medal in the 4 × 200 m relay, setting a new world record. In the individual 100 m race he finished almost simultaneously with Masanori Yusa and Shigeo Arai and was placed fourth, although photographs suggest he was second.

Shōji Ueda was a photographer of Tottori, Japan, who combined surrealist compositional elements with realistic depiction. Most of the work for which Ueda is widely known was photographed within a strip of about 350 km running from Igumi to Hagi (Yamaguchi).

Ueda, romanized as Uyeda in an old version of Hepburn romanization, is the 60th most common Japanese surname. Notable people with the surname include:

Shigeru Ueda is a Japanese anime storyboard artist and director. When he graduated from university, he joined AUBEC to work in the animation industry. After working as a production manager and assistant director, he made his directorial debut with Tsuruhime Ja!. At that same time, he married a female animator. Later, after working as an episode director on Sohryuden: Legend of the Dragon Kings, he left AUBEC and worked at various companies such as Anime Spot and Madhouse, and is currently working as a freelancer.

Kenji Ueda is a Japanese rock musician and producer. He is known for his solo work, as well as his work with Kenzi & The Trips and The Pillows.

Inoue Masaharu was a daimyō and official of the Tokugawa shogunate during late-Edo period Japan. His courtesy title was Kawachi-no-kami. 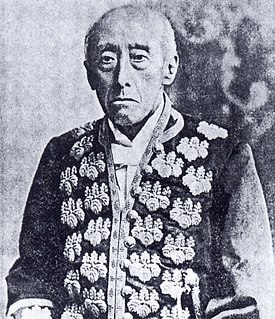 Inoue Masanao was a daimyō and official of the Tokugawa shogunate during Bakumatsu period Japan.

Masaharu Iwata is a Japanese video game composer. After graduating from high school, where his musical projects included composing on a synthesizer and playing in a cover band, he joined Bothtec as a composer. He composed the soundtrack to several games there, beginning with 1987's Bakusou Buggy Ippatsu Yarou, and after the company was merged into Quest, he left to become a freelance composer.

Masaharu Fukuyama is a Japanese singer-songwriter and actor from Nagasaki. He debuted in 1990 with the single "Tsuioku no Ame no Naka".

Masaharu is a masculine Japanese given name. Notable people with the name include:

Massan is a Japanese television drama series, the 91st Asadora broadcast daily on NHK from September 29, 2014, until March 28, 2015. Massan is based on the lives of Masataka Taketsuru and his wife Jessie Roberta "Rita" Cowan, a Scotswoman Taketsuru met while studying abroad. American actress Charlotte Kate Fox stars as Ellie Kameyama opposite Japanese actor Tetsuji Tamayama as Masaharu Kameyama in a fictionalized account of Rita's travels to Japan and Taketsuru's attempts to begin the Nikka Whisky Distilling company. It is the first time that NHK's Asadora series has featured a non-Japanese actor in a lead role.