Masahiro Kunda (薫田真広, Kunda Masahiro), (born Kakamigahara, September 29, 1966) is a Japanese rugby union hooker and coach. Kunda played for Toshiba Brave Lupus, a team he coached to a League title victory in 2007. [2] Originally from Gifu Prefecture, he was educated at University of Tsukuba (Tsukuba Daigaku). He served as the captain in the 1995 Rugby World Cup and is now Head Coach of the Japan U20s squad. [3]

Toshiba Fuchu Rugby Football Club – better known as the Toshiba Brave Lupus, with Lupus referring to a wolf in Latin – is a Japanese rugby union team in the Top League. They are based in Fuchu, Tokyo, as is their local rival Suntory Sungoliath. They won the second ever Top League championship in the 2004-5 season and the Microsoft Cup in 2005 under their innovative and inventive coach Masahiro Kunda, himself a former hooker for Toshiba and Japan. They are particularly known for the strength of their mauls. Before the Top League was created, the team was called Toshiba Fuchu after their location. Their slogan for 2006 season was "Once again to the Pinnacle (Restart)".

Yamaha Júbilo is a rugby union team based in Iwata, Shizuoka, Japan. The team came second behind Toshiba Brave Lupus in the second season of Japanese rugby's Top League (2004–05). They were coached by former All Black Grant Batty and Fijian player-coach Tabai Matson.

Suntory Sungoliath is owned by the Suntory beverage company and is one of the Japanese rugby union teams in the Top League. The team is based in Fuchū, Tokyo, as is their local rival Toshiba Brave Lupus.

Sean Bernard Long, also known by the nickname of "Longy", is an English former professional rugby league footballer who played in the 1990s and 2000s. An England and Great Britain international scrum-half, Long is regarded by many as one of the finest British players of his generation. He began his career with the Wigan Warriors, and also played for the Widnes Vikings and Hull FC, but is best known for his time playing for St Helens in the Super League with whom he won a total of four Super League championships and five Challenge Cups, as well as numerous individual accolades including the Man of Steel award, and three Lance Todd Trophies.

Paul Emerick is the defense and skills coach and 2019 interim head coach for the Houston SaberCats of Major League Rugby, and a former USA international rugby player. He played centre, fullback or wing for the USA Eagles and last played professionally for London Wasps.

Ben Darwin is a former Australian rugby union footballer. A graduate of the Australian Institute of Sport scholarship program, he played 28 times for the Wallabies, Australia's national team, from 2001 to 2003. During this time, Darwin played games against the British and Irish Lions and was part of the Wallabies' 2003 Rugby World Cup team. His usual position was tighthead prop, although on occasion he played at Loosehead too. 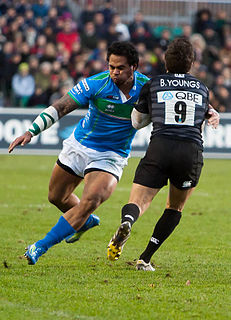 Joe Barakat is an Australian rugby union Coach. He is currently the forwards coach for the Melbourne Rebels in Victoria, Australia after the Western Force was axed by the ARU. 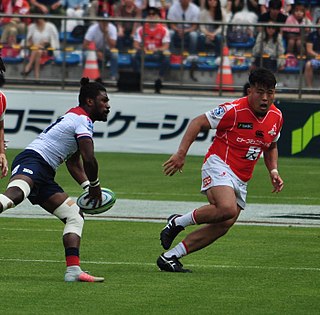 Takuma Asahara is a Japanese international rugby union player who plays in the prop position. He currently plays for the Sunwolves in Super Rugby and the Toshiba Brave Lupus in Japan's domestic Top League.

Hiroki Yamamoto is a Japanese international rugby union player who plays as a flanker. He currently plays for the Toshiba Brave Lupus in Japan's domestic Top League.

Takahiro Ogawa is a Japanese international rugby union player who plays as a scrum-half. He currently plays for the Sunwolves in Super Rugby and Toshiba Brave Lupus in Japan's domestic Top League.

Kyosuke Kajikawa is a Japanese international rugby union player who plays as a lock or flanker. He currently plays for the Sunwolves in Super Rugby and Toshiba Brave Lupus in Japan's domestic Top League.

Malgene Ilaua is a Japanese international rugby union player who plays as a flanker. He currently plays for the Sunwolves in Super Rugby and Toshiba Brave Lupus in Japan's domestic Top League.