Masahiro Shinoda (篠田 正浩, Shinoda Masahiro, born March 9, 1931) is a retired Japanese film director, originally associated with the Shochiku Studio, who came to prominence as part of the Japanese New Wave in the 1960s.

He joined the Shōchiku Studio in 1953 as an assistant director, [2] where he worked on films by such directors as Yasujirō Ozu. [3] He debuted as a director in 1960 with One-Way Ticket for Love, which he also scripted. [2]

His focus on youth and the cultural and political turmoil of 1960s Japan made him a central figure in the Shōchiku New Wave alongside Nagisa Ōshima and Yoshishige Yoshida. He worked in a variety of genres, from the yakuza film ( Pale Flower ) to the samurai film ( Assassination ), but he particularly became known for his focus on socially marginal characters and for an interest in traditional Japanese theater, which found its greatest expression in Double Suicide , in which actors are manipulated like Bunraku puppets. [4] He also was interested in sports, directing a documentary on the 1972 Winter Olympics. [4] Also known for his collaborations with such artists as Shūji Terayama and Tōru Takemitsu, Shinoda left Shōchiku in 1965 to form his own production company, Hyōgensha. [4]

Masahiro Shinoda's first marriage was with Kazuko Shiraishi, both had a daughter. [8] In 1967 he married the actress Shima Iwashita, who appears in several of his films. [2] He retired from directing after the release of Spy Sorge in 2003, a biopic on the life of Richard Sorge.

Yagyū Jūbei Mitsuyoshi was one of the most famous and romanticized of the samurai in Japan's feudal era.

Kenji Mizoguchi was a Japanese film director and screenwriter.

Shinjū means "double suicide" in Japanese, as in Shinjū Ten no Amijima, written by the seventeenth-century tragedian Chikamatsu Monzaemon for the puppet theatre. In common parlance shinjū is used to refer to any group suicide of persons bound by love, typically lovers, parents and children, and even whole families. In Japanese theatre and literary tradition, double suicides are the simultaneous suicides of two lovers whose ninjo, or love for one another are at odds with giri, social conventions or familial obligations. Double suicides were rather common in Japan throughout history and double suicide is an important theme of the puppet theatre repertory. The tragic denouement is usually known to the audience and is preceded by a michiyuki, a small poetical journey, where lovers evoke the happier moments of their lives and their attempts at loving each other. 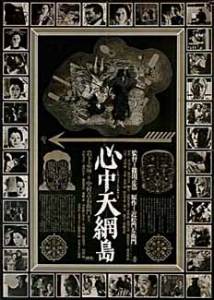 Double Suicide is a 1969 film directed by Masahiro Shinoda. It is based on the 1721 play The Love Suicides at Amijima by Monzaemon Chikamatsu. This play is often performed with puppets. In the film, the story is performed with live actors but makes use of Japanese theatrical traditions such as the kuroko who invisibly interact with the actors, and the set is non-realist. The kuroko prepare for a modern-day presentation of a puppet play while a voice-over, presumably the director, calls on the telephone to find a location for the penultimate scene of the lovers' suicide. Soon, human actors substitute for the puppets, and the action proceeds in a naturalistic fashion, until from time to time the kuroko intervene to accomplish scene shifts or heighten the dramatic intensity of the two lovers' resolve to be united in death.

Samurai Spy, also known as Spy Hunter, is a 1965 film directed by Masahiro Shinoda, based on a novel by Koji Nakada. The legendary samurai Sasuke Sarutobi tracks the spy Nojiri, while a mysterious figure named Sakon leads a band of men on their own quest for the wily Nojiri. Soon no one knows just who is who and what side anyone is on. Made during the height of the cold war, the film follows the lives of spies caught up in the power struggles of their times.

Assassination, also known as The Assassin, is a 1964 film directed by Masahiro Shinoda.

Toshiyuki Teruya, better known as Gori (ゴリ) or Gorie (ゴリエ) or Gorie Matsuura, is a Japanese comedian, variety show host, voice actor, film director, and musician. He is a member of the owarai group Garage Sale. He has also appeared in drag as a schoolgirl character named Gorie and collaborated with Jasmine Ann Allen and Joann Yamazaki to release three singles. Mickey reached number one on the Oricon charts in 2004.

The Flower and the Angry Waves is a 1964 Japanese film directed by Seijun Suzuki.

Silence is a 1966 novel of theological fiction by Japanese author Shūsaku Endō, published in English by Peter Owen Publishers. It is the story of a Jesuit missionary sent to 17th century Japan, who endures persecution in the time of Kakure Kirishitan that followed the defeat of the Shimabara Rebellion. The recipient of the 1966 Tanizaki Prize, it has been called "Endo's supreme achievement" and "one of the twentieth century's finest novels". Written partly in the form of a letter by its central character, the theme of a silent God who accompanies a believer in adversity was greatly influenced by the Catholic Endō's experience of religious discrimination in Japan, racism in France, and a debilitating bout with tuberculosis.

Yasujirō Shimazu was a Japanese film director and screenwriter, and a pioneer of the shomin-geki genre at the Shōchiku studios in pre-World War II Japan.

Gonza the Spearman is a 1986 Japanese drama film directed by Masahiro Shinoda. It was entered into the 36th Berlin International Film Festival, where it won the Silver Bear for outstanding artistic contribution.

Pale Flower is a 1964 Japanese film noir directed by Masahiro Shinoda. The film is about Muraki a Yakuza hitman just released from prison. At an illegal gambling parlor, he finds himself drawn to a mysterious young woman named Saeko. Though Saeko loses large sums of money, she asks Muraki to find games with larger and larger stakes. The two become involved in an intense mutually destructive relationship. Film critic Roger Ebert gave Pale Flower four stars and put it on his list of Great Movies.

Tatsuo Suzuki is a Japanese cinematographer who has worked with many prominent independent directors.

Captive's Island is a 1966 Japanese drama film directed and edited by Masahiro Shinoda. The film was scripted by Japanese author and politician Shintarō Ishihara.

Lone Wolf and Cub: Final Conflict is a 1993 Japanese film directed by Akira Inoue. It is based on Kazuo Koike's manga series Lone Wolf and Cub. Masakazu Tamura played Ogami by Koike Kazuo's strong request. Koike produced the film on the theme of parent-child love, not action as with past Lone Wolf and Cub films and television drama series.