Masakane Yonekura (Japanese : 米倉 斉加年; c. 1934 – 26 August 2014) was a Japanese stage director, actor, author and illustrator who was one of the central members of the Gekidan Mingei theatre company. [1]

Kanako Yonekura is a badminton player from Japan.

Chihiro Yonekura is a Japanese singer and songwriter from Yokohama, Kanagawa, Japan.

Ryoko Yonekura is a Japanese actress and former fashion model best known for her role in the Japanese medical drama Doctor-X: Surgeon Michiko Daimon. She is also the official Japanese dubbing roles for Scarlett Johansson in Avengers film series, as Black Widow.

Toshinori Yonekura born October 21, 1972, is a Japanese singer-songwriter and record producer originally from Toyonaka, Osaka. Known as "Yone" to fans, Toshinori made his major label debut with the single "Mikan no Android" in 1992 on Geneon Entertainment. Aside from his own music career, Yonekura has crafted songs for some of Japan's best known acts such as KinKi Kids, Hiromi Go, Akiko Wada, and SMAP. In 2008, he made his first foray into acting joining the Japanese production of the Broadway musical, Rent.

Elvandia Story is a tactical role-playing game for the PlayStation 2. It was developed by Spike and released in Japan on April 26, 2007. The game features high resolution 2D sprites. The game's battle format has been compared to Fire Emblem, in which the camera switches perspective to a 3/4 overhead view of one-on-one combat. The music is composed by Norihiko Hibino. The main musical theme for Elvandia Story, titled "Lion no Tsubasa", was sung by Chihiro Yonekura.

Yoshiko Yonekura is a retired female badminton player of Japan who won Japanese national and international titles in the late 1970s and the 1980s. She is the mother of badminton player Kenichi Tago.

Koki Yonekura is a Japanese footballer who plays for JEF United Chiba as a right full-back, and occasionally as an attacking midfielder.

Kanako is a feminine Japanese given name.

Mutsuura Domain was a Japanese feudal domain of the Edo period, located in southern Musashi Province in what is now part of Kanagawa Prefecture. Mutsuura was a Fudai domain. It consisted of two separate geographic areas, one in Kuragi District, Musashi, and the other in Osumi District, Sagami, with its headquarters in Musashi in what is now part of Kanazawa-ku, Yokohama.

Yonekura Masakata was the 4th daimyō of Mutsuura Domain in southern Musashi Province, Honshū, Japan and 7th head of the Yonekura clan. His courtesy title was Nagato-no-kami.

Yonekura Satonari was the 2nd daimyō of Mutsuura Domain in southern Musashi Province, Honshū, Japan and 5th head of the Yonekura clan. His courtesy title was Tango-no-kami.

Yonekura Tadasuke was a daimyō in mid-Edo period Japan. His courtesy title was Tango-no-kami. 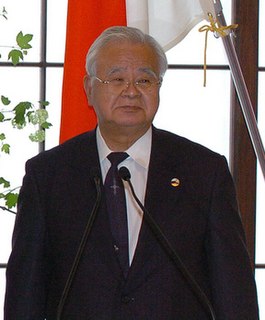 Hiromasa Yonekura was a Japanese businessman. He was chairman of Sumitomo Chemical and was also the chairman of the Japan Business Federation.

Teruyasu Yonekura is a Japanese athlete. He competed in the men's pole vault at the 1996 Summer Olympics. He is currently a coach for Nishi Sports.

Yonekura is a Japanese surname. Notable people with the surname include:

Hoji Yonekura is a Japanese boxer. He competed in the men's light welterweight event at the 1964 Summer Olympics.

Kazuyoshi Saito is a Japanese singer-songwriter. Making his professional debut in 1993, Saito's popularity exploded in 2007 after 15 years in the music industry. He is also one-half of the rock duo Mannish Boys with Tatsuya Nakamura and a member of the supergroup the Curling Sitones. In 2013, Saito became the first Japanese musician to have a signature model acoustic guitar with Gibson. As of 2020, he had six signature models with them and one with Epiphone.