Shimizu is the 18th most common Japanese surname. Less common variants include 志水 and 冷水. Notable people with the surname include:

One Wonderful Sunday is a 1947 Japanese film co-written and directed by Akira Kurosawa. It is in black-and-white and runs 108 minutes. The film was made during the allied occupation of Japan and shows some of the challenges being faced by post-war Tokyo. It is notable in the Kurosawa canon because Masako breaks the fourth wall near the end of the film.

Noboru Nakamura was a Japanese film director and screenwriter. His 1963 film Twin Sisters of Kyoto was nominated for the Academy Award for Best Foreign Language Film. His 1967 film Portrait of Chieko was also nominated for the Best Foreign Language Oscar. His 1967 film Lost Spring was entered into the 17th Berlin International Film Festival. It was announced that his three films, Home Sweet Home (1951), When It Rains, It Pours (1957), and The Shape of Night (1964), will screen at the Tokyo Filmex in 2013.

Sagara Yoshihi (相良義陽) (1544–1581) was a Japanese daimyō of the Sengoku period, who ruled a region in southern Higo Province.

Yoshikata Yoda was a Japanese screenwriter. He wrote for more than 130 films between 1931 and 1989. He is most famous for his work with Kenji Mizoguchi. He wrote for the film Bushido, Samurai Saga, which won the Golden Bear at the 13th Berlin International Film Festival.

Ichiro Sugai was a Japanese actor. He appeared in more than 300 films between 1930 and 1971. Sugai often worked with Kaneto Shindo, Kenji Mizoguchi and Kōzaburō Yoshimura. 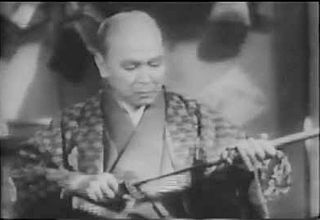 Ryosuke Kagawa was a Japanese actor.

Saburo Date was a Japanese actor. In 1945, he signed a contract with Daiei Film company and started his acting career. Following year, he made his film debut with Okagura Kyōdai directed by Hiroshi Inagaki. At the same time, he was given the stage name Saburo Date by Inagaki. As the Daiei studio gave up film production in 1970, he left Daiei and became a freelance actor. He appeared in nearly 200 films between 1947 and 1990.

Masao is a masculine Japanese given name. Notable people with the name include:

Kojiki Taishō is jidaigeki novel written by Jirō Osaragi in 1945. The novel deals with the warlord Gotō Matabei's life during the Warring States period. The novel was adapted into film in 1952 and 1964.

Ryōhei Uchida was a Japanese actor. Uchida appeared in nearly 300 films between 1950 and 1984. He specialized in playing villains and yakuza roles.

Kazuo Kitamura was a Japanese actor. His son is actor Yukiya Kitamura. Kitamura met Shōhei Imamura when he was a student of Waseda University and became a close friend so often worked with Imamura. Kitamura joined Bungakuza theatre company and started his acting career in 1950. In 1953, he made his film debut with An Inlet of Muddy Water directed by Tadashi Imai.

Morozumi Torasada also called Morozumi Bingono Kami Torasada(諸角豊後守) was a Japanese samurai and commander of the Sengoku period. He served the Takeda clan.

Sakenobe Hidetsuna was a Japanese samurai and commander of the Sengoku period. He was a senior retainer of the Mogami clan. He was also the castle lord in command of Sakenobe castle. In 1581, he surrendered when his Sakenobe castle was attacked by Mogami Yoshiaki and soon he became Yoshiaki's chief vassal.

Uragami Munekage was a Japanese samurai and commander of the Sengoku period.

Minoru Ōki was a Japanese actor. His notable film appearances were Lone Wolf and Cub films, Stakeout, and Not Forgotten.