Mastika is a liqueur seasoned with mastic, a resin with a slightly pine or cedar-like flavor gathered from the mastic tree, a small evergreen tree native to the Mediterranean region.

In Greece, mastika (Greek : μαστίχα) is a sweet liqueur produced with the mastika resin from the Greek island of Chios. This is the original mastika liqueur, not to be confused with mastika from other Balkan nations.[ citation needed ]

Greek mastika is made by distilling the mastika crystals. Sugar is typically added. It is a sweet liqueur that is typically consumed at the end of a meal. It has a unique and distinct flavor, reminiscent of pine and herbs. Mastika has medicinal properties and aids digestion. [1]

According to Bulgarian law, mastika is an alcoholic drink with minimum 47% vol of alcohol, made of natural ethanol flavoured with anethole, extracted by rectification of essential oils from star anise, anise, fennel or other plant, containing the same aroma component with concentration at least of 2.5 grams per litre, sugar at least 40 grams per litre, with or without addition of mastic and/or aroma distillate and has specific organoleptic characteristics.

In North Macedonia, mastika (Macedonian : мастика) is most commonly consumed as an aperitif, usually poured over ice and enjoyed with meze. Containing 43–45% alcohol, it has a hot taste not unlike that of brandy and is usually made from grapes. In North Macedonia, mastika has traditionally been made in the Strumica area; the best known Macedonian brand, Strumička mastika ("Mastika of Strumica"), made by the company Grozd since 1953, contains 43% alcohol and is produced exclusively at export quality. [2] 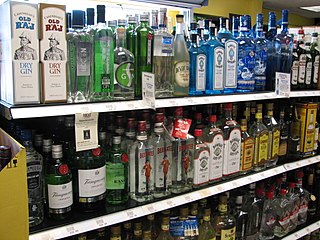 Gin is a distilled alcoholic drink that derives its predominant flavour from juniper berries. Gin is one of the broadest categories of spirits, all of various origins, styles, and flavour profiles, that revolve around juniper as a common ingredient. 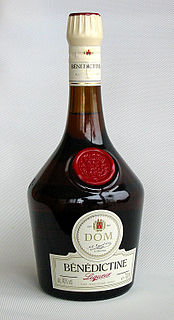 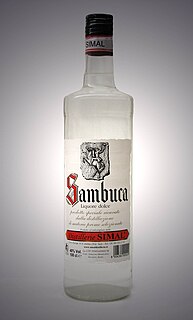 Sambuca is an Italian anise-flavoured, usually colourless, liqueur. Its most common variety is often referred to as white sambuca to differentiate it from other varieties that are deep blue in colour or bright red. Like other anise-flavoured liqueurs, the ouzo effect is sometimes observed when combined with water.

Pistacia lentiscus is a dioecious evergreen shrub or small tree of the genus Pistacia, growing up to 4 m (13 ft) tall which is cultivated for its aromatic resin, mainly on the Greek island of Chios. 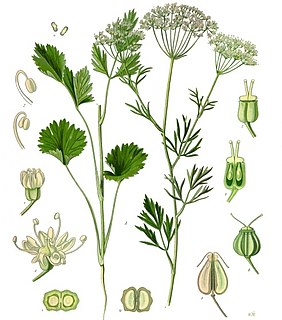 Anise, also called aniseed, is a flowering plant in the family Apiaceae native to the eastern Mediterranean region and Southwest Asia.

Pastis is an anise-flavoured spirit and apéritif from France, typically containing less than 100 g/l sugar and 40–45% ABV.

Anisette, or Anis, is an anise-flavored liqueur that is consumed in most Mediterranean countries, mainly in Spain, Italy, Portugal, Turkey, Greece, Lebanon, Cyprus, Israel, and France. It is colorless, and because it contains sugar, is sweeter than dry anise flavoured spirits. The most traditional style of anisette is that produced by means of distilling aniseed, and is differentiated from those produced by simple maceration by the inclusion of the word distilled on the label. And while Pastis is a similar-tasting liqueur that is prepared in similar fashion and sometimes confused with anisette, it employs a combination of both aniseed and licorice root extracts. Sambuca is essentially an anisette of Italian origin that requires a high minimum (350g/l) sugar content.

Ouzo is a dry anise-flavoured aperitif that is widely consumed in Greece and Cyprus. It is made from rectified spirits that have undergone a process of distillation and flavoring. Its taste is similar to other anise liquors like rakı, arak, pastis and sambuca. 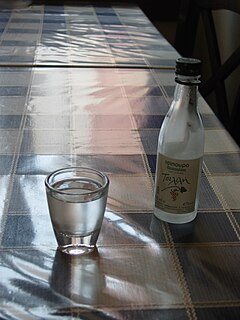 Tsipouro is an un-aged brandy from Greece and in particular Thessaly, Epirus, Macedonia, and the island of Crete. Tsipouro is a strong distilled spirit containing 40–45% alcohol by volume and is produced from either the pomace or from the wine after the grapes and juice have been separated. It comes in two types, pure and anise-flavoured, and is usually not aged in barrels, although barrel aged versions do exist.

Rakia or rakija is the collective term for fruit brandy popular in the Balkans. The alcohol content of rakia is normally 40% ABV, but home-produced rakia can be stronger.

Aguardiente is a generic term for alcoholic beverages that contain between 29% and 60% alcohol by volume (ABV). The word is a compound of the Romance languages' words for "water" and "burning"/"fiery", similarly to the English term firewater. Both aguardiente and brandy—from the Dutch expression brandewijn for "burnt wine"—originated as terms for distilled spirits using whatever ingredients were available locally. 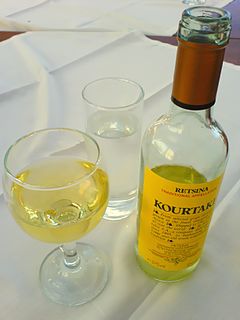 Mastichochoria is a former municipality on the island of Chios, North Aegean, Greece. Since the 2011 local government reform it is part of the municipality Chios, of which it is a municipal unit. It is located in the southwestern and extreme southern part of the island. It is the largest municipal unit in land area on Chios at 211.687 km2. Its population was 3,672 at the 2001 census. The seat of the municipality was Pyrgi. The next largest villages are Kalamotí (569), Armólia (442), Mestá (337), and Lithío (397). The small coastal village of Emporeios (47) boasts an archaeological site. 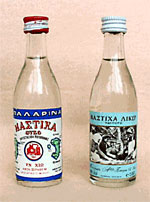 Chios Mastiha Liqueur is a liqueur flavoured with mastic distillate or mastic oil from the island of Chios. The name Chios Mastiha has protected designation of origin status in the European Union. Chios Mastiha liqueur is served cold and has a crystal clear colour and a sweet aroma.

Lemon liqueur is a liqueur made from lemons, liquor, and sugar. It is light to bright lemon yellow in color; intensely lemony in flavor; clear, cloudy, or opaque; and sweet or sweet and sour. Lemon zest is used, water may be added, and the liqueur is not sour. Milk or cream may be added to make a lemon cream liqueur. Lemon juice is not used to alter the taste and affect the stability of the lemon liqueur. 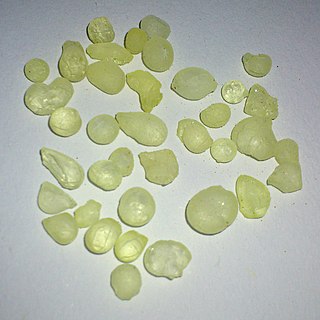 Mastic is a resin obtained from the mastic tree. In pharmacies and nature shops, it is called Arabic gum and Yemen gum. In Greece, it is known as tears of Chios, being traditionally produced on the island Chios, and, like other natural resins, is produced in "tears" or droplets.

Anise drinks is a family of alcoholic drinks with unique characteristics such as: 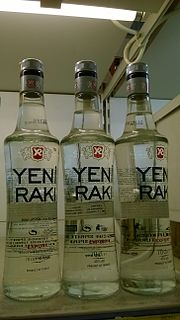 Raki or rakı is a sweetened, often anise-flavoured, alcoholic drink that is popular in Albania, Turkic countries, Turkey, Greek Islands and in the Balkan countries as an apéritif. It is often served with seafood or meze. It is comparable to several other alcoholic beverages available around the Mediterranean and the Middle East, e.g. pastis, ouzo, sambuca, arak and aguardiente.