Matej Mugerli (born 17 June 1981 in Nova Gorica) is a Slovenian former professional road bicycle racer, who rode professionally between 2005 and 2008, and from 2011 to 2020 for the Liquigas, Perutnina Ptuj, Adria Mobil, Synergy Baku and SPORT.LAND. Niederösterreich teams. He now works as a directeur sportif for UCI Continental team Hrinkow Advarics Cycleang. [2]

Radoslav Rogina is a Croatian former professional road bicycle racer, who rode professionally between 2002 and 2020, for the Tenax, Perutnina Ptuj, Loborika and Adria Mobil teams. Rogina represented Croatia at the 2008 Summer Olympics when he finished 25th in the road race event. He represented Croatia again at the 2012 Summer Olympics in London finishing 41st in road race.

Markus Eibegger is an Austrian former professional road bicycle racer, who rode professionally between 2007 and 2018. He was the winner of the Austrian National Road Race Championships in 2009. 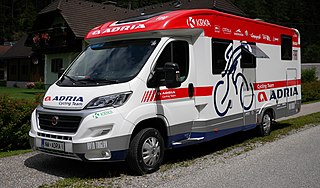 Adria Mobil is a Continental cycling team founded in 1972. It is based in Novo Mesto, Slovenia and it participates in UCI Continental Circuits races.

Grega Bole is a Slovenian professional road bicycle racer, who most recently rode for UCI WorldTeam Bahrain–McLaren. His biggest victory is the 2011 GP Ouest–France, where he launched a solo attack with 2 kilometres (1.2 mi) to go. He held on as the field was closing in rapidly, with only Simon Gerrans who was second on the day being awarded the same time as Bole. In 2015, Bole was the victor of the first stage of the inaugural Tour of Croatia after negotiating a series of bends where two crashes occurred.

Jure Kocjan is a Slovenian former professional road racing cyclist, who rode professionally between 2005 and 2016. 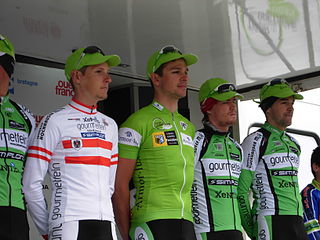 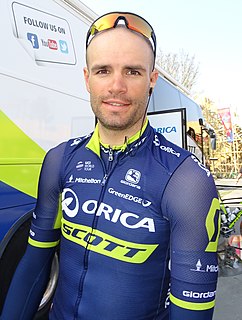 Luka Mezgec is a Slovenian road bicycle racer, who currently rides for UCI WorldTeam Team BikeExchange. After scoring numerous podium finishes in 2013, Mezgec finally tasted victory on the fifth stage of the Tour of Beijing. He was named in the start list for the 2015 Vuelta a España.

Matija Kvasina is a Croatian racing cyclist, who is currently suspended from the sport after a positive doping test. He finished 56th in the road race and 38th in the road time trial at the 2008 Summer Olympics in Beijing.

Team Ljubljana Gusto Santic is a Slovenian cycling team founded in 1949, which has competed as a UCI Continental team since 2005. It participates in UCI Continental Circuits races. 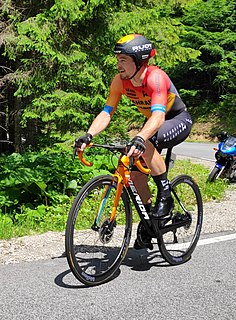 Kristjan Fajt is a Slovenian racing cyclist, who last rode for UCI Continental team Adria Mobil. His only professional win to date came at the 2008 Tour of Qinghai Lake. He rode for Slovenia at the 2014 UCI Road World Championships.

Matej Marin is a Slovenian former professional racing cyclist, who rode professionally between 2003 and 2015 for the Perutnina Ptuj and Felbermayr–Simplon Wels teams. He rode at the 2013 UCI Road World Championships. 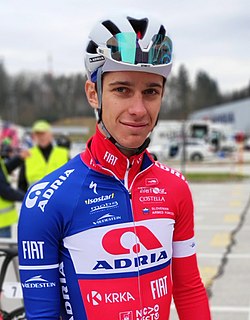 Filippo Zana is an Italian professional racing cyclist, who currently rides for UCI ProTeam Bardiani–CSF–Faizanè. In August 2020, he rode in the 2020 Il Lombardia in Italy. In October 2020, he was named in the startlist for the 2020 Giro d'Italia.