Neighboring Brazilian states are (from north clockwise) Mato Grosso, Goiás, Minas Gerais, São Paulo and Paraná. It also borders the countries of Paraguay, to the southwest, and Bolivia, to the west. The economy of the state is largely based on agriculture and cattle-raising. Crossed in the south by the Tropic of Capricorn, Mato Grosso do Sul generally has a warm, sometimes hot, and humid climate, and is crossed by numerous tributaries of the Paraná River.

The state is also known for its natural environment, and is a destination for domestic and international tourism. The Pantanal lowlands cover 12 municipalities and presents a variety of flora and fauna, with forests, natural sand banks, savannahs, open pasture, fields and bushes. The city Bonito, in the mountain of Bodoquena, has prehistoric caves, natural rivers, waterfalls, swimming pools and the Blue Lake cave.

The name Mato Grosso do Sul is Portuguese for "Thick Bushes of the South"; the name is inherited from its northern neighbour state of Mato Grosso, of which it was part until the 1970s. It is not uncommon for people to mistakenly refer to Mato Grosso do Sul as simply "Mato Grosso". Other names that were proposed, at the time of the split and afterwards, include "Pantanal" (a reference to its best known geographical feature) and "Maracaju" (a reference to the Maracaju Mountain Range that crosses the state from north to south).

The "cerrado" landscape is characterized by extensive savanna formations crossed by gallery forests and stream valleys. Cerrado includes various types of vegetation. Humid fields and "buriti" palm paths are found where the water table is near the surface. Alpine pastures occur at higher altitudes and mesophytic forests on more fertile soils. The "cerrado" trees have characteristic twisted trunks covered by a thick bark, and leaves which are usually broad and rigid. Many herbaceous plants have extensive roots to store water and nutrients. The plant's thick bark and roots serve as adaptations for the periodic fires which sweep the cerrado landscape. The adaptations protect the plants from destruction and make them capable of sprouting again after the fire.

The state is located in western Brazil, in a region mostly occupied by the inland marshes of the Pantanal. The highest elevation is the 1,065 m high Morro Grande.

In the Cerrado areas, mostly in the south, central and east, there is a predominance of Southern Brazilian farmers of Spanish, German, Portuguese, Italian and Slavic descent.

Portuguese is the official national language, and thus the primary language taught in schools. But English and Spanish are part of the official high school curriculum. Brazil a country of all, in the Center-West Region does not have structure to have large tourist port much less is well positioned.

There are more than 44 universities in whole state of Mato Grosso do Sul. [10]

It's a film festival held annually in the months of January and February and has been arranged since 2004. It focuses on the independent cinema presenting Brazilian films and foreign films as well. It also presents regional films and short films. As of 2011 the festival is suspended.

Concentrations of lime in the soil around the area where Bonito is located is responsible for the transparency of the waters and for the existence of a wide variety of geological formations. Local activities include diving in caverns, observing the underwater fauna and walking along trails in the forest.[ citation needed ] Places like Gruta Lago Azul (Blue Lake Cave) and the Fazenda Estancia Mimosa, Aquario Natural (Natural Aquarium), and the rivers Sucuri, Prata, and Formoso, are popular.[ citation needed ]

The Pantanal is an ecological destination in the heart of Brazil.[ citation needed ] It is the largest flooded lowland on the planet and the third largest environmental reserve in the world. It is home to one of the richest ecosystems ever found to date,[ citation needed ] with periodically flooded seasonal forests. It displays the largest concentration of neo-tropical fauna, including several endangered species – mammals, reptiles and fish – and it also serves as habitat for a variety of native birds, as well as those migrating from other areas in the Americas. The Pantanal is one of the best places in Brazil for flora and fauna observation and for fishing – permitted only between March and October – due to its abundance of animals.[ citation needed ] It has a total area of 230,000 square kilometres, covering 12 townships in the States of Mato Grosso and Mato Grosso do Sul. To the North, there are the Paracis, Azul and Roncador mountains. To the East, the Maracaju Mountain Range. To the South, the Dodoquena Mountain Range. And, to the West, the Paraguayan and Bolivian swamps. The Pantanal is so diverse that researchers subdivided it in sub-regions. Each "Pantanal" – North and South – has its own natural features, activities and ideal period for visitation.

Campo Grande was one of the 18 candidates to host games of the 2014 FIFA World Cup which will take place in Brazil. It did not make to the final list, being one of the 5 cities left off. Maceió gave up its bid before the end of the process.

Mato Grosso do Sul's flag was designed by Mauro Michael Munhoz. A white stripe divides an upper left green corner from a bottom right blue space with a yellow star. White symbolizes hope, green is an allusion to the state's rich flora, blue represents its vast sky, while the yellow star adds balance, force and serenity. The star on the flag is Alphard, the brightest star in the constellation Hydra. 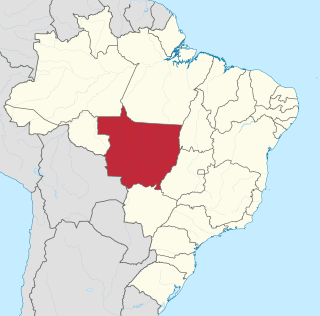 Mato Grosso is one of the states of Brazil, the third largest by area, located in the western part of the country.

Campo Grande is the capital and largest city of the Brazilian state of Mato Grosso do Sul in the Center-West region of the country. The city is nicknamed Cidade Morena because of the reddish-brown colour of the region's soil. It has a population of 796,252, according to a 2011 IBGE estimate, while its metropolitan area is home to 991,420 people (2010). 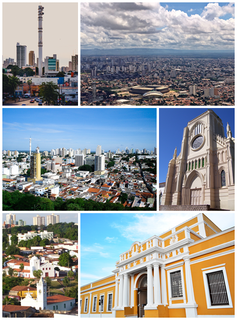 Cuiabá is the capital city of the Brazilian state of Mato Grosso. It serves as the Geographical Centre of South America and forms the metropolitan area of the state, along with the neighbouring town of Várzea Grande.. The city’s name is an indigenous Bororo word meaning ‘arrow-fishing’.

CorumbáPortuguese pronunciation: [koɾũˈba] is a municipality in the Brazilian state of Mato Grosso do Sul, 425 km northwest of Campo Grande, the state's capital. It has a population of approximately 111,000 inhabitants, and its economy is based mainly on agriculture, animal husbandry, mineral extraction, and tourism, being the gateway to the biggest wetlands of the world, the Pantanal.

Pantanal Linhas Aéreas S.A. was a regional airline based in São Paulo, Brazil and incorporated by TAM Airlines in 2013. It served destinations mainly in the southeast region of Brazil from its bases at Congonhas and Guarulhos airports in São Paulo. 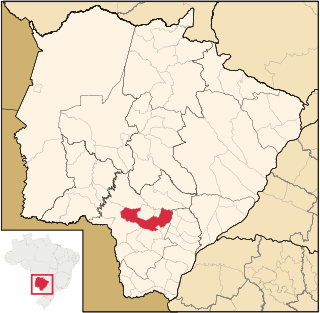 Dourados is a Brazilian municipality, situated in the state of Mato Grosso do Sul, 225 km (140 mi) Southwest of Campo Grande. It has a population of about 210,000 inhabitants, and its economy is based mainly in arable agriculture and in cattle ranching. Dourados is also the second most populous and important city of this state. 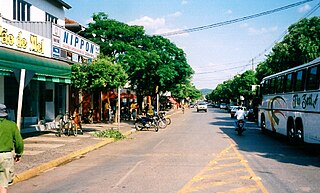 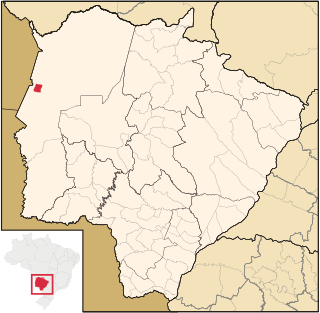 Ponta Porã is a municipality located in the Brazilian state of Mato Grosso do Sul. Its population is 83.747 (2013) and its area is 5,329 km². It has a dry border and a conurbation with the city of Pedro Juan Caballero in Paraguay.

The Pantanal Matogrossense National Park is a national park in the states of Mato Grosso and Mato Grosso do Sul, Brazil.

Serra da Bodoquena National Park is a national park in the state of Mato Grosso do Sul, Brazil. 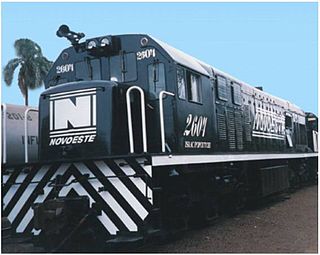 The Train of Pantanal is a railway in the state of Mato Grosso do Sul, Brazil that passes through the Pantanal region. It begins in the city of Campo Grande and ends in Corumbá, a total distance of 420 km. It is sometimes referred to as the Train of Death.

José Manuel Fontanillas Fragelli was a Brazilian politician, lawyer and academic. Fragelli served as the Governor of Mato Grosso from 1970 until 1974 and the President of the Senate of Brazil from 1985 through 1987.

The Federal University of Grande Dourados is a Brazilian public institution which is located in the city of Dourados, state of Mato Grosso do Sul, Brazil. 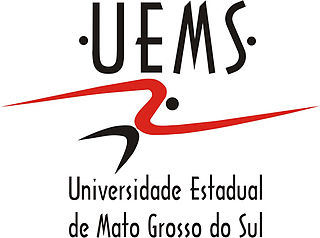