Matthew William Brennan (October 3, 1897 – January 3, 1963) was an American football back who played two seasons in the National Football League with the New York Giants and Brooklyn Lions. He first enrolled at Villanova University before transferring to Fordham University and lastly Lafayette College. [1]

William Joseph Brennan Jr. was an American judge who served as an Associate Justice of the United States Supreme Court from 1956 to 1990. As the seventh longest-serving justice in Supreme Court history, he was known for being a leader of the Court's liberal wing.

James Gerald Brennan, known as Jim Brennan or Jimmy Brennan, is a Canadian soccer manager, analyst and former player who manages York9 FC. During his playing career he played as a defender in Canada and England, most notably with Bristol City, Nottingham Forest, Norwich City and Toronto FC.

Colton James "Colt" Brennan is a former American professional football quarterback. He was drafted by the Washington Redskins in the sixth round of the 2008 NFL Draft, but was released two years later. He played college football for the University of Hawaii Warriors.

Luke Brennan is a former Australian rules footballer in the Australian Football League. 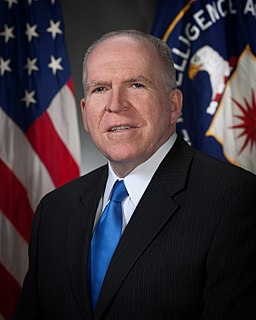 John Owen Brennan is a former American intelligence official who served as the Director of the Central Intelligence Agency (CIA) from March 2013 to January 2017. He served as chief counterterrorism advisor to U.S. President Barack Obama, with the title Deputy National Security Advisor for Homeland Security and Counterterrorism, and Assistant to the President. Previously, he advised Obama on foreign policy and intelligence issues during the 2008 election campaign and presidential transition. Brennan withdrew his name from consideration for Director of the Central Intelligence Agency (CIA) during the first Obama administration over concerns about his support, after defending on TV the transferring of terror suspects to countries where they might be tortured while serving under President George W. Bush. Instead, Brennan was appointed Deputy National Security Advisor, a position which did not require Senate confirmation.

Terence Patrick Brennan is a former American football player and coach. He served as the head football coach at the University of Notre Dame from 1954 to 1958, compiling a record of 32–18.

Brennan Carroll is an American football coach for the Seattle Seahawks. His nickname is BC.

Ger Brennan is an Irish Gaelic footballer who plays for St Vincents and formerly played for Dublin.

Thomas or Tom Brennan may refer to:

The 2006 Sheraton Hawaii Bowl was a college football bowl game that was a part of the 2006-2007 bowl game schedule of the 2006 NCAA Division I FBS football season. This was the fifth Hawaiʻi Bowl played, and was sponsored by Sheraton Hotels and Resorts. It was played on December 24, 2006, at Aloha Stadium in Honolulu. The game matched the Arizona State Sun Devils against the Hawaiʻi Warriors, and was televised on ESPN.

John Carter "Jack" Brennan was an American football player. He played at the guard position for the University of Michigan from 1936 to 1938 and for the Green Bay Packers in 1939. 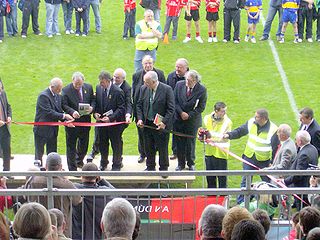 Brennan Marcel Williams is an American former professional football offensive tackle, professional wrestler and announcer currently signed to WWE, where he performs under the name Dio Maddin. He is a commentator for WWE's flagship brand Monday Night Raw. He previously wrestled on the independent circuit under the ring name Marcellus Black.

Katie Brennan is an Australian rules footballer with the Richmond Football Club in the AFL Women's (AFLW). She previously played for and captained the Western Bulldogs from 2017 to 2019. Brennan was signed as a marquee player by the Bulldogs ahead of the inaugural AFL Women's season in 2017, and was their leading goalkicker in 2019.

Brent Munger Brennan is an American football coach. He is the head football coach at San Jose State University, a position he has held since the 2017 season.

York 9 Football Club, commonly known as York9 FC or simply York9, is a Canadian professional soccer club based in York Region, Ontario. The club competes in the Canadian Premier League and plays its home games at York University's York Lions Stadium in Toronto.