Matthew "Matt" White (born 22 February 1974 in Sydney, New South Wales) is an Australian former professional road racing cyclist. Currently White is working as a sporting director for Team BikeExchange. [1] White has also worked as a sporting director for Garmin–Cervélo but was let go because of doping offenses during his racing career. [2] His most notable results are winning a stage of the 1999 Tour de Suisse and another stage victory at the 2005 Tour Down Under. He mainly worked as a domestique throughout his career, sacrificing personal ambitions to help his leader. [3]

White started competitive cycling at age 14. Like so many other Australian professional riders he started his career on the track under Charlie Walsh, competing in the Junior World Championship in Athens. In 1994, he attended the Commonwealth Games in Victoria Canada, his fourth spot in the Team Time Trial was taken by soon to be retired Phil Anderson but he did compete in & finish the road race. Turning professional in 1996 at age 22 with the Giant-Australian Institute of Sport team under the GIANT-A.I.S. Sports Director and Australian National Coach, German born Heiko Salzwedel. During this period the team's European headquarters were in Cottbus, Germany.

After 2 years with the Australian GIANT-AIS Cycling Team, White then went through Italian teams Amore & Vita–ForzArcore (1998) and Vini Caldirola (1999) before finding himself on the US Postal Service team from 2001 through to 2003. In this period White was not selected to ride the Tour de France with Lance Armstrong but did ride the 2003 Vuelta a España in support of Roberto Heras. [4] In 2004, Matthew moved to the French Cofidis team to join fellow Australian Stuart O'Grady.

He was selected in the Cofidis team to ride the 2004 Tour de France, but did not make the start line after falling and breaking his collar bone just hours prior to the start while warming up. [5] Much to his relief he was selected again in 2005 and made it to the start. In 2005, he won stage 4 at the Tour Down Under, besting fellow Aussie Robbie McEwen to the sprint after their escape group of six riders succeeded. [3]

White also coached his wife, Jane Saville, to a bronze medal at the 2004 Athens Olympics in the 20 km race walk. [6] The couple split their time between Sydney and Olivia, Spain.

In 2012, as head of Australia's cycling team, Orica-GreenEDGE, Matt White admitted that during his competitive career he used performance-enhancing drugs while on the U.S. Postal Service squad, where doping formed part of the team's strategy and said "I too was involved in that strategy". He stood down from his role with Orica-GreenEDGE on 13 October 2012. [7] On 17 October 2012 Matt White was sacked as a national coach by Cycling Australia due to his use of performance-enhancing drugs. [8] Despite his involvement in doping Orica-GreenEDGE announced on 11 June 2013 that it was reinstating Matt White as their sports director.

Stuart O'Grady is a retired Australian professional road bicycle racer, who rode as a professional between 1995 and 2013. A former track cyclist, O'Grady and Graeme Brown won a gold medal in the Men's Madison at the 2004 Summer Olympics. O'Grady also won Paris–Roubaix in 2007. O'Grady competed in the Tour de France from 1997 and contended for the points classification in the Tour de France known as the green jersey, finishing second in the 1998, 1999, 2001 and 2005 races. He wore the yellow jersey of general classification leader in 1998 and 2001.

Brett Lancaster is an Australian former professional racing cyclist, who rode professionally between 2003 and 2016. Born in Shepparton, Victoria, Lancaster started cycle racing at the age of 14 in 1993. He spent four years riding for Ceramiche Panaria–Fiordo before moving to Team Milram in July 2006. In 2009 and 2010 he rode for Cervélo TestTeam, and rode for Garmin–Cervélo in 2011.

Cédric Vasseur is a French former professional road racing cyclist, and current general manager of UCI WorldTeam Cofidis. As a rider, Vasseur competed between 1993 and 2007 for the Novemail–Histor, Crédit Agricole, U.S. Postal Service, Cofidis and Quick-Step–Innergetic squads. Vasseur was considered an all-rounder who could do well in a variety of races. He raced in all of the spring classics such as Tour of Flanders and Paris–Roubaix, and won a stage of the Dauphiné Libéré stage race as well as two at the Tour de France.

David Zabriskie is a retired professional road bicycle racer from the United States, who competed as a professional between 1999 and 2013. His main strength is individual time trials and his career highlights include stage wins in all three Grand Tour stage races and winning the US National Time Trial Championship seven times. Zabriskie is known for his quirky nature, including singing before stages and the interviews he does with fellow riders in the professional peloton which are posted on his web site.

Simon Gerrans is an Australian former professional road bicycle racer, who rode professionally between 2005 and 2018, for the AG2R Prévoyance, Crédit Agricole, Cervélo TestTeam, Team Sky, Orica–Scott and BMC Racing Team squads. He currently works as an athlete intern at Goldman Sachs in London.

EF Education–Nippo, is an American professional cycling team. Founded in 2003, they have competed in the UCI World Tour since 2009. Headquartered in Boulder, Colorado, United States, the team maintains an equipment and training facility in Girona, Catalonia, Spain. In 2018, EF Education First, an international education company — founded in Sweden but headquartered and incorporated in Switzerland — purchased a controlling equity stake in Slipstream Sports, the sports management company behind the team. The founder and CEO is American Jonathan Vaughters and the head sporting director is Briton Charly Wegelius. 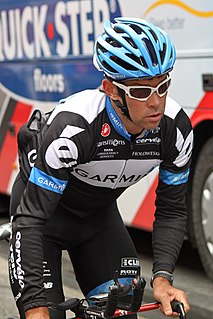 Julian Dean is a former professional road racing cyclist from New Zealand who competed as a professional between 1999 and 2013. He last rode for UCI World Tour team Orica–GreenEDGE, where he now works as an assistant sporting director and mentor. His main achievements include winning the 2007 and 2008 New Zealand National Road Race Championships, finishing 9th in the 2005 World Road Championships in Madrid, and 10th place in the 2002 World Road Championships in Zolder. At the peak of his career he was considered the best lead out rider in the world, and was highly regarded by his teammate and friend Thor Hushovd. 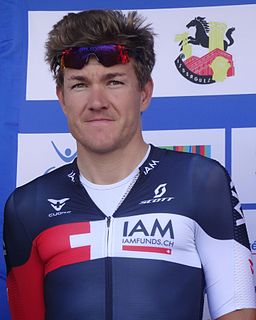 Heinrich Haussler is an Australian road racing cyclist of German heritage, who currently rides for UCI WorldTeam Team Bahrain Victorious. He has won 2 stages in Grand Tours during his career, one at the 2005 Vuelta a España and another at the 2009 Tour de France. He is also a good Classics specialist, registering top results in notable classic races, and was the 2015 Australian national road race champion. 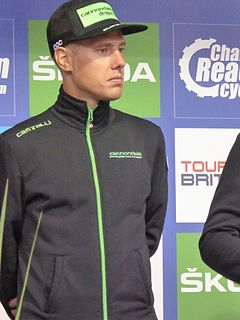 The 2011 season for the Garmin–Cervélo cycling team began in January at the Tour Down Under and ended in October at the Noosa Grand Prix. As a UCI ProTeam, they were automatically invited and obligated to send a squad to every event in the UCI World Tour.

Simon Clarke is an Australian professional road racing cyclist, who currently rides for UCI WorldTeam Team Qhubeka Assos. He previously rode for the Astana (2011) and Orica–GreenEDGE (2012–2015) teams in the UCI World Tour. Before turning professional, Clarke competed in track cycling as an Australian Institute of Sport scholarship holder. He is not related to fellow Australian cyclist and past teammate Will Clarke.