Matthew Kellison (c. 1560 – 21 January 1642) was an English Roman Catholic theologian and controversialist, and a reforming president of the English College, Douai.

Born about 1560 at Harrowden, Northamptonshire, [1] he was son of a servant and tenant of William Vaux, 3rd Baron Vaux of Harrowden. In 1581 he entered the English College of Douai, then temporarily at Rheims, and in September 1582 he was sent with six of his fellow-students to the English College at Rome. In August 1587 he received orders, probably those of sub-deacon, and in September 1589, the year of his advancement to the priesthood, was sent back to Rheims to succeed William Giffard as professor of scholastic theology. He moved to Douai with the other professors and students of the college in 1593, and matriculated in the university there on 1 April 1594. Afterwards he returned to Rheims, and having taken the degree of D.D., he was appointed in 1601 regius professor, and on 30 January 1606 magnificus rector or chancellor of the university. When Arras College was founded at Paris in 1611 to associate scholars for the purpose of writing controversial works, Kellison was one of the five first admitted. He frequently visited the college. [2]

During the disputes at Douai College, in consequence of the subservience of the president, Thomas Worthington, to the Jesuits, the cardinal-protector summoned Worthington to Rome, and appointed Kellison as provisional head. Kellison arrived at Douai on 10 June 1613, and in November he was installed as the fourth president of the college. He resigned his preferments at Rheims, despite the inducement to remain held out by the Duke of Guise. [2]

At Douai he appointed professors, obtained the discharge of the Jesuit confessor, and withdrew the scholars from Jesuit schools to be taught in the College. Within a few years he had expelled Edward Weston and Thomas Singleton, leading supporters of the Jesuits within Douai. [3] His reforms made him enemies, but the nuncios at Brussels and Paris supported him. The English secular clergy three times without result recommended him to be their bishop, in 1608, 1614, and 1622. After presiding over Douai College for 27 years he died there, on 21 January 1642. [2] 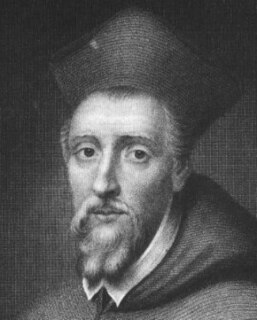 William Allen, also known as Guilielmus Alanus or Gulielmus Alanus, was an English Cardinal of the Roman Catholic Church. He was an ordained priest, but was never a bishop. His main role was setting up colleges to train English missionary priests with the mission of returning secretly to England to keep Roman Catholicism alive there. Allen assisted in the planning of the Spanish Armada's attempted invasion of England in 1588. It failed badly, but if it had succeeded he would probably have been made Archbishop of Canterbury and Lord Chancellor. The Douai-Rheims Bible, a complete translation into English from the Latin, was printed under Allen's orders. His activities were part of the Counter Reformation, but they led to an intense response in England and in Ireland. He advised and recommended Pope Pius V to pronounce Elizabeth I deposed. After the Pope declared her excommunicated and deposed, Elizabeth intensified the persecution of her Roman Catholic religious opponents.

The University of Douai is a former university in Douai, France. With a medieval heritage of scholarly activities in Douai, the university was established in 1559 and lectures started in 1562. It closed from 1795 to 1808. In 1887, it was transferred as University of Lille 27 km away from Douai.

The English College, was a Catholic seminary in Douai, France, associated with the University of Douai. It was established in 1568, and was suppressed in 1793. It is known for a Bible translation referred to as the Douay–Rheims Bible. Of over 300 priests from Douai sent on the English mission, about one-third were executed. The dissolution of the college at the time of the French Revolution led to the founding of Crook Hall near Lanchester in County Durham, and St Edmund's College, Ware. It is popularly believed that the indemnification funds paid by the French for the seizure of Douai's property were diverted by the British commissioners to complete the furnishings of George IV's Royal Pavilion at Brighton.

Robert Abbot (1560–1617) was an Anglican bishop, academic and polemical writer. He served as Master of Balliol College, Oxford, Regius Professor of Divinity, and Bishop of Salisbury from 1615. Among his four younger brothers, George became Archbishop of Canterbury and Maurice became Lord Mayor of London.

Richard Bristow was an English Catholic controversialist and Biblical scholar.

William Bishop was the first Roman Catholic bishop after the English Reformation. Officially, he was the titular Bishop of Chalcedon, his territory included all of England, Wales and Scotland.

The Reverend Father Gregory Martin was an English Catholic Priest, a noted scholar of his time, academic and Doctor of Divinity, and served as the chief translator of the Rheims and Douai Version of the Bible, the first full, official Catholic English Bible translation, translated from the Latin Vulgate.

George Musket, alias Fisher was an English Roman Catholic priest and controversialist. On the English mission he was under sentence of death for around 20 years, but survived.

Thomas Bell was an English Roman Catholic priest, and later an anti-Catholic writer.

Francis Walsingham was an English Jesuit priest, who assumed the name John Fennell.

William Harrison (c.1553–1621) was an English Roman Catholic priest. He was the third and last archpriest of England.

John White (1570–1615) was an English clergyman, known as a royal chaplain and controversialist.