Matthew McLintock Scott (11 July 1872 – 14 August 1941) was a Scottish footballer who captained Scotland against Wales in the 1897–98 British Home Championship. He played most of his career at Airdrieonians, but also played for one season at Newcastle United and Albion Rovers. [2] As a footballer, he was considered a "powerfully built full back." [3]

Scott was born in Airdrie, a town in North Lanarkshire, Scotland, in 1872. He was the son of Daniel Scott, who worked as an engine fitter on the railway at Airdrie, and Helen (née McLintock). [4] At the age of 18, Matthew Scott was working as a commercial clerk in Airdrie. [5]

Scott first joined Airdrieonians in September 1890, playing as a full back. He "kicked the ball long and with purpose" and specialised in clearances off the line. [1]

On 19 March 1898, Scott captained the Scotland national football team against Wales at Fir Park, as part of the 1897–98 British Home Championship. Scott played full back and the end result was a 5–2 victory for Scotland. [6]

Scott signed for Newcastle United for the 1900–01 season, having been brought in as cover for Dave Gardner. He played five matches in total and his debut was against Sheffield United on 8 December 1900, playing as a left back. [3] He was described as being a "touch slow when against a winger with pace". [1] For the duration of this season, Scott resided in Newcastle as a boarder of Mrs Isobel Harrison, a widow who lived at 136 Croydon Road. [7]

Scott returned to Airdrieonians after his season at Newcastle, and continued playing for them until 1902 when he signed for Albion Rovers. [1] In February 1903, whilst playing in a match for Albion Rovers against Renton, Scott sustained a "serious wound to the right shin bone". [8] Following this injury Scott was forced to retire from football. [1] Scott has been inducted into the Airdrieonians F.C. Hall of Fame, which was inaugurated in 2002. [9]

Scott had a number of siblings. An older brother, Robert, also played for Airdrieonians and was capped for Scotland in the 1893–94 British Home Championship. [1] On 28 August 1896, he married Annie Steel in Airdrie. [10] He died on 14 August 1941 in the Royal Glasgow Cancer Hospital. [11] 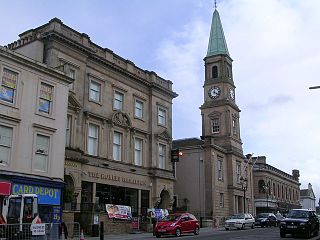 Airdrie is a town in North Lanarkshire, Scotland. It lies on a plateau roughly 400 ft above sea level, and is approximately 12 miles (19 km) east of Glasgow city centre. As of 2012, the town had a population of around 37,130. Historically part of Lanarkshire, Airdrie forms part of a conurbation with its neighbour Coatbridge, in what is commonly known as the Monklands, formerly a district..

Coatbridge is a town in North Lanarkshire, Scotland, about 8 1⁄2 miles east of Glasgow city centre, set in the central Lowlands. The town, with neighbouring Airdrie, is part of the Greater Glasgow urban area. While the earliest known settlement of the area dates back to the Stone Age era, the founding of the town can be traced to the 12th century, when a Royal Charter was granted to the monks of Newbattle Abbey by King Malcolm IV. Coatbridge, along with its neighbour Airdrie, forms the area known as the Monklands.

Albion Rovers Football Club is a semi-professional football team from Coatbridge, North Lanarkshire, Scotland. They are members of the Scottish Professional Football League (SPFL) and, as of the 2019–20 season, play in League Two, the fourth tier of the Scottish football league system. Founded in 1882 as the result of an amalgamation of two teams, Albion and Rovers, the club joined the Scottish Football League initially in 1903 before returning in 1919 and, although they have spent most of their time in the lower divisions, have maintained their league membership since. Their sole major honours during that time have been wins in the lower two divisions of the senior league system.

Hugh Kilpatrick Gallacher was a Scottish football player in the 1920s and 1930s. In 624 senior games, Gallacher scored 463 goals, playing senior league football for Airdrieonians, Newcastle United, Chelsea, Derby County, Notts County, Grimsby Town and Gateshead. Prior to this he also played and scored for then non-league Queen of the South.

John Albert Chapman was a Scottish football player and manager. Born in New Monkland, Lanarkshire, he began his playing career with Rangers in 1904. A year later, he moved to Albion Rovers, before another transfer in 1906 to Dumbarton, where he scored three goals in nine appearances.

Monklands was, between 1975 and 1996, one of nineteen local government districts in the Strathclyde region of Scotland.

Broomfield Park was a football stadium in Airdrie, North Lanarkshire, home of Airdrieonians from 1892 until it was closed after the 1993–94 football season.

James Conlin was an English footballer who played as a left-sided winger.

Ray Franchetti is a former association football player and manager. He played for Airdrieonians and Albion Rovers in the Scottish Football League, and then managed Albion Rovers during the 1985–86 season.

Glasgow University Football Club are a Scottish football team that represents the University of Glasgow. Having played previously in the Caledonian Amateur Football League, from the 2020–21 season, their first team will play in the newly formed West of Scotland Football League.

Jack Leitch is a Scottish footballer who plays for Stirling Albion. A midfielder, he started his career with Motherwell and was a product of the Motherwell Academy. In 2016, he moved to Airdrieonians and had one season with the Diamonds. Leitch then played for Peterhead for three seasons before signing for Stirling Albion in 2020.

Robert Scott was a professional footballer who played for Scotland against Ireland in the 1893–94 British Home Championship. Scott was born in Airdrie, North Lanarkshire.

William Wilson is a Scottish former football player and manager.

Scott Stewart is a Scottish footballer who plays for Arbroath as a full-back or midfielder. He began his career at Airdrieonians.