Mauby (in Trinidad and Tobago, Saint Lucia, Jamaica, St. Vincent and The Grenadines, Grenada, Guyana, Bermuda, Barbados, Antigua and Barbuda and Anguilla), also known as maví (or mabí) in the Dominican Republic and Puerto Rico, mabi in Haiti and Martinique, and maubi in the Virgin Islands and Dutch Caribbean islands of St. Eustatius, St. Maarten and Saba), is a tree bark-based beverage grown, and widely consumed, in the Caribbean. It is made with sugar and the bark and/or fruit of certain species in the genus Colubrina including Colubrina elliptica (also called behuco indio) and Colubrina arborescens , a small tree native to the northern Caribbean and south Florida. Recipes usually include other ingredients as well, spices such as aniseed being very common. Mauby was traditionally a fermented beverage made in small batches, but is now predominantly a commercial non-fermented soft drink.

Haiti and the Dominican Republic are two of the largest Caribbean exporters of the bark and leaves. Often the drink is fermented using a portion of the previous batch, while sometimes it is consumed unfermented. Mauby is often bought as a pre-made syrup and then mixed with water (sparkling or still) to the consumer's taste, but many make it themselves at home or purchase it from neighbourhood producers or street sellers. Its taste is initially sweet, somewhat like root beer, but changes to a prolonged, but not astringent bitter aftertaste. To many, it is an acquired taste, and has been known to cause an initial laxative reaction unexpected to many first-time drinkers.

Grupo Taino LLC of the Dominican Republic markets two commercial versions of mabi, both made with carbonated water. Seybano is lighter in color and made from tree bark extract and white and brown sugar, while Cacheo is darker and made from both bark and fruit extract, with spices and brown sugar. [1] Contrary to its name, Mabi Cacheo does not include sap from the Cacheo palms ( Pseudophoenix ekmanii and P. vinifera ).

Mauby Fizzz is a commercially produced and carbonated version of the drink produced in Trinidad and Tobago by multinational PepsiCo from mauby bark. It is unfermented. A similar version is also produced in Saint Vincent and the Grenadines called Hairoun Mauby, produced by St. Vincent Brewery Limited, a company in the AmBev portfolio. 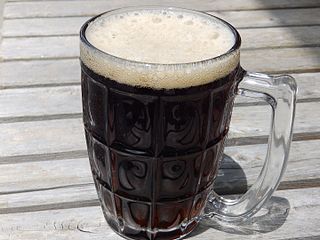 Root beer is a sweet North American beverage traditionally made using the root bark of the sassafras tree Sassafras albidum or the vine of Smilax ornata (sarsaparilla) as the primary flavor. Root beer is typically but not exclusively non-alcoholic, caffeine-free, and carbonated. It usually has a thick and foamy head when poured. Modern, commercially produced root beer is generally sweet, foamy, carbonated, non-alcoholic, and flavored using artificial sassafras flavoring. Sassafras root is still used to flavor traditional root beer, but since sassafras was banned by the U.S. Food and Drug Administration due to the carcinogenicity of its constituent safrole, most commercial recipes do not contain sassafras. Some commercial root beers do use a safrole-free sassafras extract. Major producers include A&W Root Beer, Barq's, Dad's Root Beer, Hires Root Beer, and Mug Root Beer.

Ginger ale is a carbonated soft drink flavoured with ginger. It is consumed on its own or used as a mixer, often with spirit-based drinks. There are two main types of ginger ale. The golden style is credited to the Irish doctor Thomas Joseph Cantrell. The dry style, a paler drink with a much milder ginger flavour, was created by Canadian John McLaughlin.

Traditional ginger beer is a sweetened and carbonated, usually non-alcoholic beverage. It is produced by the natural fermentation of prepared ginger spice, yeast and sugar. 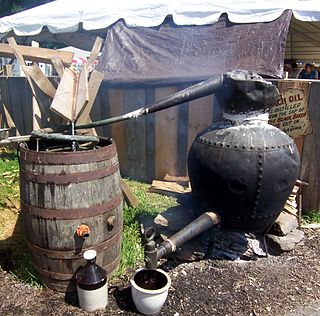 Birch beer is a beverage which is commonly found as a carbonated soft drink made from herbal extracts and birch bark. There are dozens of brands of birch beer available. 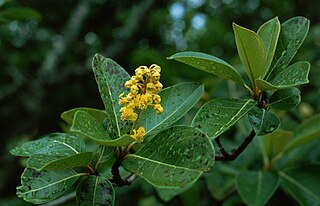 Malta is a lightly carbonated malt beverage, brewed from barley, hops, and water much like beer; corn and caramel color may also be added. However, Malta is non-alcoholic, it has a strong beer smell and flavor and is consumed in the same way as beer or cola in its original carbonated form, and to some extent, iced tea in non-carbonated form.

Sima is a Finnish fermented low level alcoholic drink and soft drink. It is a form of mead, an alcoholic beverage produced by fermenting a solution of honey and water, although nowadays the honey is usually replaced with different kinds of sugar, mostly syrup. The drink also has a very low alcohol content due to limited fermentation. Sima is therefore a sweet sparkling beverage that is mainly seasonal and connected with the Finnish Vappu festival. It is usually spiced by adding both the flesh and rind of a lemon.

The 2007 Caribbean Cup is the fourteenth edition of the biennial Caribbean Cup, the finals of which were contested in Trinidad and Tobago between 12 January and 23 January 2007. The four semifinalists qualified for the 2007 edition of the CONCACAF Gold Cup. In all, 24 of the eligible countries participated.

The Southern Caribbean is a group of islands that neighbor mainland South America in the West Indies. St. Lucia lies to the north of the region, Barbados in the east, Trinidad & Tobago at its southernmost point, and Aruba at the most westerly section. 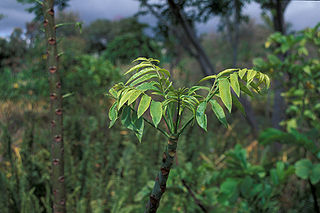 Spondias dulcis, known commonly as ambarella (ඇඹරැල්ලා) in Sri Lanka or June plum is an equatorial or tropical tree, with edible fruit containing a fibrous pit. It is known by many other names in various regions, including kedondong in Indonesia and in Malaysia, ambra in Malaysia, buah long long among the Chinese population in Singapore, Isbaandheys' in Somalia, Embe Ng'ong'o' in Tanzania, prune de cythère, pommecythere, or golden apple in Trinidad and Tobago, Dominica, Guadeloupe, Suriname, Saint Lucia and Martinique, June plum in Bermuda and Jamaica, mangotín in Panama, yuplón in Costa Rica, golden apple in Grenada, Saint Vincent and the Grenadines, Barbados and Guyana, golden plum in Belize, jobo indio in Venezuela, cajá-manga and cajarana in Brazil and São Tomé and Príncipe, quả cóc in Vietnam, /məkaʔ/ (ម្កាក់) in Cambodia, amra in Bangladesh, manzana de oro in Dominican Republic, cas mango in Cameroon, Maldives, vi in Samoa, Tonga, and Hawaii. In Seychelles frisiter and มะกอกบก or มะกอกฝรั่ง in Thailand.

Haitian cuisine consists of cooking traditions and practices from Haiti. It is a Creole cuisine, that originates from a blend of several culinary styles that populated the western portion of the island of Hispaniola, namely the French, African, indigenous Taíno, Spanish and Arabic influence. Haitian cuisine, comparable to that of "criollo" cooking and similar to the rest of the Latin Caribbean, but differs in several ways from its regional counterparts.

The 2009 CONCACAF U-20 Championship qualifying tournament determined the Caribbean and Central American Under-20 association football national teams that would participate in the 2009 CONCACAF U-20 Championship, which itself will qualify national teams to the 2009 FIFA U-20 World Cup. Qualification began on 14 May 2008. The final round of qualification was a one-game playoff on 2 March 2009, between the runner-up from the Caribbean zone, St Vincent and the Grenadines, and the 3rd-place finisher from the Central American zone, Honduras. The three North American zone nations, Canada, Mexico, and the United States, as well as tournament hosts Trinidad and Tobago, were automatically entered into the final tournament without need for qualification.

Peanut punch is a beverage popular in Trinidad and it is made with peanut butter, milk, sugar and sometimes spices. Rum is sometimes used as an ingredient. It is also available commercially in supermarkets and grocery stores as well to cater those markets. In Trinidad and Tobago, peanut punch is a popular drink that is often sold on sidewalks or in established food stores. The drink is traditionally marketed as an energy drink and made with a variety of ingredients according to the vendor.

Champagne cola, champagne kola, or champagne soda is a sweetened carbonated beverage produced mainly in the tropics of Latin America or India. Kola Champagne was invented in Puerto Rico by Ángel Rivero Méndez.