Maurice Challe (5 September 1905 – 18 January 1979) was a French general during the Algerian War, one of four generals who took part in the Algiers putsch.

A native of Le Pontet, Vaucluse, and a veteran of the Second World War, Challe transmitted the Luftwaffe order of battle to the British prior to D-Day and backed De Gaulle's return to power. [1] Challe initially served his conscription service in the infantry and was later commissioned as a pilot officer in military aviation, going on to become commander of the French Air Force in Algeria between 1955 and 1960.

In July 1956, Egyptian leader Gamal Abdel Nasser took control of the Suez Canal, in violation of agreements he had signed with the British and French governments. On 14 October 1956, Challe visited British Prime Minister Anthony Eden at Chequers, accompanied by French Minister of Labor Albert Gazier. The two Frenchmen told Eden of the secret negotiations between Israel and France regarding a proposed Israeli attack on Egypt followed with military occupation by European powers, to control the Suez Canal. Eden backed the plan with UK resources including military forces, directly leading to the Suez Crisis. [2] [3] [4] [5]

Challe was a French Air Force general whose greatest military success was in the realm of counter-insurgency operations during the Algerian War. His offensive, begun in March 1959, succeeded in substantially weakening the ALN. Through the use of speed and concentration of force, Challe kept the ALN insurgents in constant retreat and disorder. His innovative tactics would be studied and emulated by others - notably Syrian government forces in the Syrian Civil War seeking to keep insurgency at bay and off balance. The Challe Plan was only partially completed before he was reassigned to France.

A line of electrified wire, minefields and other military barriers, the Challe Line, was named after him. It doubled another defence work, the Morice Line, which fortified the border and separated Algeria from Morocco and Tunisia. [6]

He was Commander-in-Chief Allied Forces Central Europe (CINCENT) from May 1960 to his deliberate resignation in February 1961.

Challe was one of the heads of the Algiers putsch of 1961, along with Raoul Salan, Edmond Jouhaud, and André Zeller. A prime reason for Challe's involvement was his concern that the Muslim harkis who had served with the French Army against the FLN would be subject to reprisals in the event of Algerian independence. In the event, large numbers of these loyalists were massacred in 1962. [7] After the putsch failed, he and Zeller surrendered to the French Army (while Salan and Jouhaud created the OAS). Challe was sentenced to 15 years imprisonment. He was freed in December 1966 and received amnesty from President de Gaulle in 1968.

The Organisation Armée Secrète or OAS was a short-lived right-wing French dissident paramilitary organization during the Algerian War (1954–1962). The OAS carried out terrorist attacks, including bombings and assassinations, in an attempt to prevent Algeria's independence from French colonial rule. Its motto was L’Algérie est française et le restera.

The Algerian War, also known as the Algerian War of Independence or the Algerian Revolution was fought between France and the Algerian National Liberation Front from 1954 to 1962, which led to Algeria winning its independence from France. An important decolonization war, it was a complex conflict characterized by guerrilla warfare, maquis fighting, and the use of torture. The conflict also became a civil war between the different communities and within the communities. The war took place mainly on the territory of Algeria, with repercussions in metropolitan France.

Roger Trinquier was a French Army officer during World War II, the First Indochina War and the Algerian War, serving mainly in airborne and special forces units. He was also a counter-insurgency theorist, mainly with his book Modern Warfare.

Jacques Émile Massu was a French general who fought in World War II, the First Indochina War, the Algerian War and the Suez crisis. He led French troops in the Battle of Algiers, first supporting and later denouncing their use of torture. 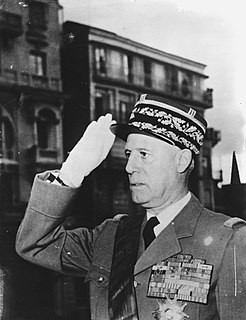 Edmond Jouhaud was one of four French generals who briefly staged a putsch in Algeria in April 1961. 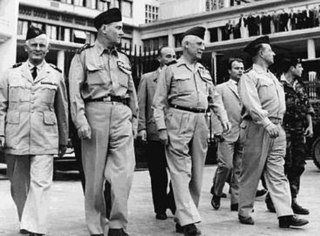 The Algiers putsch, also known as the Generals' putsch, was a failed coup d'état intended to force French President Charles de Gaulle not to abandon French Algeria, along with the resident European community and pro-French Muslims. Organised in French Algeria by retired French Army generals Maurice Challe, Edmond Jouhaud, André Zeller and Raoul Salan, it took place from the afternoon of 21 April to 26 April 1961 in the midst of the Algerian War (1954–62).

The Protocol of Sèvres was a secret agreement reached between the governments of Israel, France and the United Kingdom during discussions held between 22 and 24 October 1956 at Sèvres, France. The protocol concerns their joint political and military collusion to topple the Egyptian leader Colonel Gamal Abdel Nasser, by invading and occupying the Suez Canal zone in response to President Nasser's nationalization of the Suez Canal on 26 July. The planning for and the agreements contained in the protocol began the Suez Crisis on 29 October 1956.

The May 1958 crisis was a political crisis in France during the turmoil of the Algerian War of Independence (1954–62) which led to the collapse of the Fourth Republic and its replacement by the Fifth Republic led by Charles de Gaulle who returned to power after a twelve-year absence. It started as a political uprising in Algiers on 13 May 1958 and then became a military coup d'état led by a coalition headed by Algiers deputy and reserve airborne officer Pierre Lagaillarde, French Generals Raoul Salan, Edmond Jouhaud, Jean Gracieux, and Jacques Massu, and by Admiral Philippe Auboyneau, commander of the Mediterranean fleet. The coup was supported by former Algerian Governor General Jacques Soustelle and his activist allies.

The Morice Line was a defensive line that went into effect in September 1957 during the Algerian War. It was constructed by the French to prevent the rebel guerrillas of the Algerian National Liberation Front from entering Algeria, then a French colony, from two neighboring countries, Tunisia and Morocco. It was named after then French Minister of Defence André Morice.

Pierre Guillaume was an officer of the French Navy. He took part in the Algiers putsch of 1961 and in the Organisation armée secrète right- wing terrorist group, which opposed what it regarded as De Gaulle's treacherous abandonment of Algeria to the FLN terrorists.

The Battle of Algiers was a campaign of urban guerrilla warfare carried out by the National Liberation Front (FLN) against the French Algerian authorities from late 1956 to late 1957. The conflict began as a series of attacks by the FLN against the French forces followed by terrorist attacks on Algerian civilians by future OAS elements in Algiers, reprisals followed and the violence escalated leading the French Governor-General to deploy the French Army in Algiers to suppress the FLN. Civilian authorities left all prerogatives to General Jacques Massu who, operating outside legal frameworks between January and September 1957, successfully eliminated the FLN from Algiers. The use of torture, forced disappearances and illegal executions by the French later caused controversy in France.

André Zeller was a French Army general. He was one of the four generals who organized the Algiers putsch of 1961.

Pierre Tourret was a French Army officer who served in World War II, the First Indochina War, the Suez Crisis and the Algerian War. He commanded the 8th Shock Parachute Battalion during the Battle of Dien Bien Phu.

Jacques Marie Alfred Gaston Faure was a French Army general and skier. He was the leader of the French national Olympic military patrol team in 1936 which placed sixth and in 1961 one of the masterminds of the Algiers putsch.

The Battle of Bab el Oued was a violent confrontation which occurred during the latter stages of the Algerian War (1954–1962) between the French Army and the Organisation armée secrète (OAS) which opposed Algerian independence. It took place in Bab El Oued, a traditionally white working-class quarter of Algiers, from 23 March to 6 April 1962. 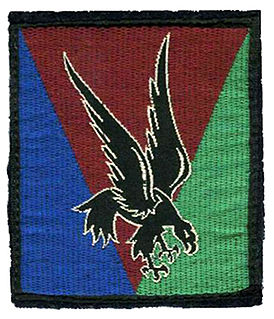 The 10th Parachute Division was a formation of the French Army, part of the French Airborne Units. It consisted predominantly of infantry troops, and specialized in airborne combat and air assault. Established in 1956, it fought primarily in the Suez Crisis and the Algerian War. It was dissolved immediately after the Algiers putsch of 1961.

Opération Corse was a military operation that precipitated the fall of the Fourth French Republic in 1958.