He was the son of David Crosbie, High Sheriff of Kerry, and his wife Jane Hamilton, daughter of William Hamilton of Lisclooney, County Offaly, and grandson of Sir Thomas Crosbie, also High Sheriff of Kerry, and his wife Bridget Tynte. His father and grandfather both opposed the Glorious Revolution, and thereafter lived quietly on their County Kerry estates; Maurice's election to the House of Commons in 1713 marked the family's return to political prominence. The Crosbie family were of Gaelic and Catholic origin, but Maurice's ancestor John Crosbie converted to the Church of Ireland in the reign of Elizabeth I and was made Bishop of Ardfert. His descendants became substantial landowners in Kerry: the senior branch of the family ere the Crosbie baronets of Maryborough, the last of whom, Sir Edward Crosbie, was executed for treason as a United Irishman in 1798.

Maurice was educated at Trinity College in Dublin. He was knighted in approximately 1711. In 1713 he was elected to the Irish House of Commons as the Member of Parliament for Kerry. [1] He held the seat until 1758, when he was elevated to the peerage as Baron Brandon in the Peerage of Ireland, and assumed his seat in the Irish House of Lords.

He married Lady Elizabeth Fitzmaurice, daughter of Thomas FitzMaurice, 1st Earl of Kerry and Anne Petty. They had seven children, including William Crosbie, 1st Earl of Glandore, Maurice Crosbie, Dean of Limerick, father of the 4th and last Baron Brandon, Mary Ann, who married John Coppinger of Glenville, County Cork and was the mother of the lawyer and politician Maurice Coppinger, Elizabeth, who married her distant cousin Lancelot Crosbie, and Jane, who married Thomas Mahon and was the mother of Maurice Mahon, 1st Baron Hartland.

Ardfert is a village in County Kerry, Ireland. Historically a religious centre, the economy of the locality is driven by agriculture and its position as a dormitory town, being only 8 km (5 mi) from Tralee. The population of the village was 749 at the 2016 census.

Baron Kerry is an ancient title in the Peerage of Ireland named after County Kerry. It was created circa 1223 for Thomas FitzMaurice, Lord OConnello.

Earl of Glandore, in the County of Kerry, was a title in the Peerage of Ireland. It was created in 1776 for the Irish politician William Crosbie, 2nd Baron Brandon.

Sir Maurice FitzGerald, 14th Knight of Kerry fought for James II in the Williamite War in Ireland, but after the defeat he conformed to the established religion by joining the Church of Ireland. He became Deputy Lieutenant of Kerry.

This is a list of people who have served as Lord Lieutenant of Kerry.

Maurice Mahon, 1st Baron Hartland, was an Irish politician and landowner. He and his sons intermittently represented County Roscommon in the Parliament of Ireland and the United Kingdom Parliament. He was able to transform his support of the Union of Great Britain and Ireland into a peerage, but was frustrated in his subsequent desire to become a viscount.

William Crosbie, 1st Earl of Glandore, known as The Lord Brandon between 1762 and 1771 and as The Viscount Crosbie between 1771 and 1776, was an Irish politician.

The High Sheriff of Kerry was the British Crown's judicial representative in County Kerry, Ireland from the 16th century until 1922, when the office was abolished in the new Free State and replaced by the office of Kerry County Sheriff. The sheriff had judicial, electoral, ceremonial and administrative functions and executed High Court Writs. In 1908, an Order in Council made the Lord-Lieutenant the Sovereign's prime representative in a county and reduced the High Sheriff's precedence. However, the sheriff retained his responsibilities for the preservation of law and order in the county. The usual procedure for appointing the sheriff from 1660 onwards was that three persons were nominated at the beginning of each year from the county and the Lord Lieutenant then appointed his choice as High Sheriff for the remainder of the year. Often the other nominees were appointed as under-sheriffs. Sometimes a sheriff did not fulfil his entire term through death or other event and another sheriff was then appointed for the remainder of the year. The dates given hereunder are the dates of appointment. All addresses are in County Kerry unless stated otherwise.

John Crosbie, alias Sean Mac an Chrosáin, died September 1621, was a bishop of the Church of Ireland.

Sir Edward Denny, 3rd Baronet was an Anglo-Irish politician. His family effectively owned the town of Tralee and had great political influence in Kerry.

Lancelot Crosbie was an Anglo-Irish politician.

Maurice Coppinger was an Irish barrister and politician, who sat in the Irish House of Commons for many years, and held the office of King's Serjeant. His name is commemorated in Coppinger Row, a side street in central Dublin city; his townhouse was on South William Street nearby. 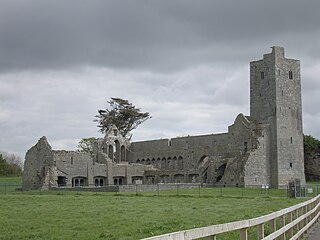 Ardfert Abbey, also known as Ardfert Friary, is a ruined medieval Franciscan friary and National Monument in Ardfert, County Kerry, Ireland. It is thought to be built on the site of an early Christian monastic site founded by Brendan the Navigator. The present remains date from the mid-thirteenth century, with the residential tower being added in the 15th century. The friary was dissolved in 1584.

Henry Rose (1675-1743) was an Irish politician and judge of the eighteenth century.

Sir Thomas Crosbie, also recorded as Crosby, was an Anglo-Irish soldier and politician.