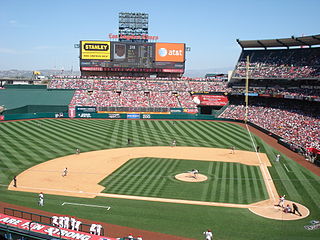 The West Coast Conference (WCC) is a collegiate athletic conference affiliated in NCAA Division I consisting of ten member schools across the states of California, Oregon, Utah and Washington.

The Gonzaga Bulldogs are the intercollegiate athletic teams representing Gonzaga University, located in Spokane, Washington, United States. Gonzaga competes in the National Collegiate Athletic Association (NCAA) Division I as a member of the West Coast Conference.

Ivan Wells "Tiny" Cahoon was an American football player and coach. He played professionally as a tackle for the Green Bay Packers of the National Football League (NFL) from 1926 to 1929. He played college football at the University of Montana and at Gonzaga University.

Claude F. McGrath was a college basketball coach and athletic director at Gonzaga University in Spokane, Washington. He was the head coach of the Bulldogs from 1933 to 1942. McGrath served in the military during World War II and returned to Gonzaga in 1946 for three seasons. His overall record as head coach stands at 129-133 (.492).

Lovell T. "Bill" Underwood was a college basketball coach, the head coach at Gonzaga University for two seasons, from 1949 to 1951, with an overall record of 26–33 (.441). Underwood resigned as head basketball coach in March 1951, and was succeeded by Hank Anderson, who stayed for 21 years.

Adrian Buoncristiani is a former college basketball coach. He served as the head coach for six seasons at Gonzaga University in Spokane, Washington, from 1972 to 1978.

Michael J. Pecarovich was an American college football coach, lawyer, and actor. He served as the head coach at Loyola University of Los Angeles—now known as Loyola Marymount University—in 1928 and 1939, Gonzaga University from 1931 to 1938, and the University of San Diego from 1960 to 1961. Pecarovich also coached two professional teams, the Los Angeles Angels of the Pacific Coast Professional Football League and the San Francisco Clippers of the California-based American Football League. 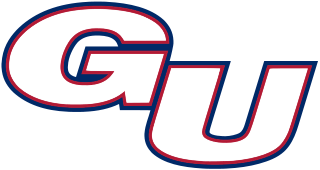 The Gonzaga Bulldogs baseball team is the varsity intercollegiate baseball program of Gonzaga University, located in Spokane, Washington, United States. The NCAA Division I program has been a member of the West Coast Conference since 1996 and its home venue is Washington Trust Field and Patterson Baseball Complex, opened on Gonzaga's campus twelve years ago in 2007.

The 1937 Santa Clara Broncos football team represented Santa Clara University during the 1937 college football season. In their second season under head coach Buck Shaw, the Broncos won all nine games, shut out seven, and outscored all opponents by a combined total of 163 to 9. In the final AP Poll released in late November, Santa Clara was ranked ninth, tied with Notre Dame.

The Gonzaga–Idaho rivalry was the football game between Gonzaga University and the University of Idaho. The respective campuses, in Spokane, Washington, and Moscow, Idaho, are approximately ninety miles (145 km) apart.

The 1928 Gonzaga Bulldogs football team was an American football team that represented Gonzaga University during the 1928 college football season. In their fourth year under head coach Maurice J. "Clipper" Smith, the Bulldogs compiled a 6–2–1 record and outscored all opponents by a total of 121 to 41.

The 1927 Gonzaga Bulldogs football team was an American football team that represented Gonzaga University during the 1927 college football season. In their third year under head coach Maurice J. "Clipper" Smith, the Bulldogs compiled a 5–3–1 record and outscored all opponents by a total of 154 to 59.

The 1977–78 Gonzaga Bulldogs men's basketball team represented Gonzaga University during the 1977–78 NCAA Division I basketball season. Members of the Big Sky Conference, the Bulldogs were led by sixth-year head coach Adrian Buoncristiani and played their home games on campus at Kennedy Pavilion in Spokane, Washington. They were 14–15 in the regular season and 7–7 in conference play.