Maya Kobayashi (小林 麻耶, Kobayashi Maya, born July 12, 1979, in Ojiya, Niigata Prefecture, Japan [1] ) is a Japanese journalist who was affiliated with Cent Force and is currently affiliated with Ikushima Planning. [2] She was a TBS announcer and sister of Mao Kobayashi.

Kobayashi was an Aoyama Gakuin University student, she appeared in Much Ado About Love as a "graduating class eighth". She sits at the front row. Much Ado About Love starred, it is a chance that had been multiplied by the voice in the cultural festival of Keio University. In 2003, Kobayashi was joined as a TBS announcer. She synchronized with Takahiro Takano and Yuriko Takahata. After six months, Kobayashi appeared as a reporter in All-Star Thanksgiving . In Atarasu~inihongo, she was chaired with Summers. From its flirts specific deportment, Kobayshi was born to say the words "Maya Kashii". In the Shin su ~i ￮￮! after the program renewal, she continued appearing in attendant role of Tetsuya Takeda as a student teacher. In October 2004, Kobayashi became a fourth generation assistant in Chubawdesu yo!. In December 2004, she served as the facilitator in the Japan Record Award . Kobayashi was in charge for five consecutive years until 2008 (mostly hired as a female TBS announcer). From March 28 to April 1, 2005, she appeared in TBS Radio & Communications' Kodansha Radio Books (Kodansha in the recitation of the offer), the first radio program at the time of her appearance (joining the introduction of an announcer, except Yurino Osawa yūyūwide, etc.) The same year in autumn, Kobayashi served as a regular for the first time in Buzios!. She served as a caster in the 2006 FIVB Volleyball Women's World Championship , which was held on October 31 to December 3, 2006, she did cheering, interviews, etc. Kobayashi was also appointed to the International Convention Relay of Volleyball. On February 21, 2007, while heading by taxi to the studio for the recording of Chubawdesu yo!, the vehicle was in a rear-end collision. She went to the hospital between recording, the same day when the program was recording. In a follow up visit on February 22, Kobayashi had been diagnosed with Cervical Spine, Lumbar, Thoracic Sprain (symptoms of the so-called "whiplash"), hospitalization. It was healed for three weeks, the doctor said, "worry, sorry for the inconvience". On February 27, she came out of the hospital and was absent during the recording of the 1,000 anniversary conference of Discovery of the World's Mysteries. On March 3, Kobayashi was discharged in the evening and returned in the live program of the 10th King's Brunch. On March 29, 2009, she left TBS to become a freelance presenter. On the same day, she left Discovery of the World's Mysteries as co-host, and she was replaced by Mai Demizu. [3] With her sister, Mao, they belonged to Cent Force in the form of business partnership. On March 30, 2009, she opened an official Ameba blog. Kobayashi served as the main caster of TBS' Sōryoku hōdō! The News. On March 26, 2010, Sōryoku hōdō! The News ended. On April 1, 2010, she was responsible for the moderator of BS Japan's Maya Kobayashi no hon ni aitai. It was Kobayashi's first regular program responsible other than TBS.

Television Debut Program Other Than TBS

Kobayashi is the 8th most common Japanese surname. A less common variant is 古林. Notable people with the surname include:

Kobayashi Issa was a Japanese poet and lay Buddhist priest of the Jōdo Shinshū sect known for his haiku poems and journals. He is better known as simply Issa (一茶), a pen name meaning Cup-of-tea. He is regarded as one of the four haiku masters in Japan, along with Bashō, Buson and Shiki — "the Great Four."

Hiroshi Kume is a Japanese television and radio presenter, journalist, author, and goodwill ambassador for Germany. He is the host of the TBS radio talk show Kume Hiroshi Radio Nandesukedo.

Hitomi Kobayashi is an important early Japanese AV idol. One of the founding figures of the Japanese adult video, she has been called indispensable to any discussion of the AV. Mainichi Shimbun calls her "one of the icons of Japanese adult cinema history." Her unprecedented popularity in the mid-1980s, the early days of the Japanese AV, earned her the title "Queen of AV." According to an adult entertainment reporter for Shukan Shincho, "She laid the foundations for the golden age of adult video."

Yumi Kobayashi is a female fashion model from Tokyo, Japan. She belongs to the show-business production Burning Production, K.K. (株式会社バーニングプロダクション) and used to belong to Platica Inc.

Mao Kobayashi was a Japanese freelance newscaster and actress. She was also one of Fuji TV's weathercasters.

Mao is a feminine Japanese given name. People with the name include: 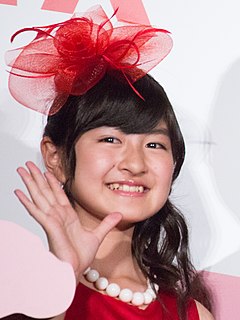 Sachiko Kobayashi, born on December 5, 1953 in Niigata, Japan, is a female Japanese enka singer and occasional voice actor. She previously worked alongside the Pokémon Company, under the alias "Garura Kobayashi".

Ruriko Kojima is a Japanese tarento, gravure idol and sportscaster, affiliated with Horipro.

Miss Kobayashi's Dragon Maid is a Japanese manga series written and illustrated by Coolkyousinnjya. The series began serialization in Futabasha's Monthly Action magazine in May 2013, and is licensed in North America by Seven Seas Entertainment. Two spin-off manga, one by Mitsuhiro Kimura and the other by Ayami Kazama, are serialized in Monthly Action. An anime television series produced by Kyoto Animation aired in Japan between January and April 2017. A second anime season has been greenlit.

Mai Demizu is a female TBS announcer, television presenter, and newscaster. She is nicknamed as Demi-chan(デミちゃん) and Demicchan (でみっちゃん). Her hobbies are watching sports, gourmet tour, watching theater, playing golf, and running. She is ambassador of Aioi, Hyogo Prefecture.

Maya Koizumi is a Japanese actress, tarento, and former gravure idol from Tokyo. Following OfJoytoy, Opus, and Peach, she belonged to the K-Dash agency Pearl Dash. Her contract with Pearl Dash was later completed in April 2014, and since June 2014 she belongs to Office Zan.

Mariko Ooe is a newsroom announcer for TV Tokyo. She was born in Buzen, Fukuoka.

Tamao Akae is a Japanese freelance announcer, chairperson, and radio personality. She is a former Asahi Broadcasting Corporation announcer. Currently she is a freelancer. 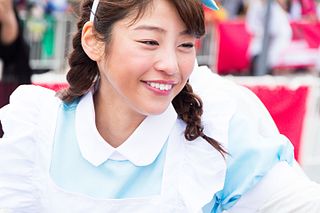 Maki Okazoe is a Japanese TV announcer, news presenter and tarento. She is represented by her agency cent. Force.

cent. Force Co.,Ltd (株式会社セント・フォース) is a Japanese talent agency headquartered in Ebisu, Shibuya, Tokyo. It was founded in 1994 and focuses on talent management for newscasters and tarento. The primary talents the agency holds are free announcers, casters and reporters. The company holds a subsidiary talent agency, Sprout Co.,Ltd, which focuses on talent management for students at a college level. Sprout was formerly a part of cent. Force until 2012, when the agency split to become a subsidiary.