The Mayors and Independents (Czech : Starostové a nezávislí), abbreviated to STAN, is a liberal political party in the Czech Republic that is focused on localism [7] and subsidiarity. The party grew out of four minor parties, including Independent Mayors for the Region, [8] which allied itself with the liberal-conservative SNK European Democrats, and cooperated with the similarly liberal-conservative TOP 09 until 2016. It holds 33 seats in the Chamber of Deputies, and is the third strongest party by number of seats following the 2021 election.

The party contested the 2021 Czech parliamentary election as part of the coalition Pirates and Mayors with the Czech Pirate Party.

STAN grew out of NSK (Nezávislí starostové pro kraj, Independent Mayors for the Region), founded in 2004 and transformed in 2009. Led by its first Leader Petr Gazdík and Deputy Leader Stanislav Polčák elected in 2009, STAN started co-operating with the liberal-conservative TOP 09 at all political levels; with Petr Gazdík leading the TOP 09 and STAN parliamentary group. In 2013, the said co-operation was de facto curtailed to the parliamentary level, i.e. was continued only in the Chamber of Deputies and the Senate. In 3/2014, Petr Gazdík was succeeded in the STAN leadership by Martin Půta (Governor, Liberecký Region); and became the First Deputy Leader deputised by Stanislav Polčák. Sharing common candidates standing in the 2014 European Parliament election, STAN and TOP 09 polled 15.95% of the votes and gained four seats with one being taken by STAN Deputy Leader Stanislav Polčák. In 2016, Martin Půta was succeeded by Petr Gazdík leading STAN into the regional and Senate elections. In 2019 Vít Rakušan was elected as a new leader. In 2020 STAN won the Senate elections (with 11 seats of 27 contested).

The party's top priorities include: good stewardship, high-quality education, environmental care and heritage protection – investing in education is key to the future prosperity that, however, must be built on the principles of good stewardship (management of public funds, use of energy resources and prudential landscape interventions). In promoting the principle of subsidiarity, STAN encourages localism, decentralisation, reduced bureaucracy and corruption clampdown. [7] STAN further promotes: European integration, high-quality education, investments in science, state economy driven by the principles of a free market with the social aspect and sanctity of private property in mind, and environment protection.

1 Does not include coalitions 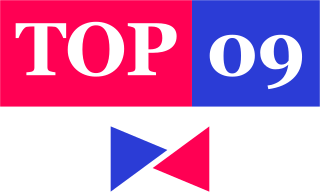 Petr Fiala is a Czech politician and political scientist who has been the Prime Minister of the Czech Republic since November 2021 and leader of the Civic Democratic Party (ODS) since 2014. He previously served as the Minister of Education, Youth and Sports from 2012 to 2013. 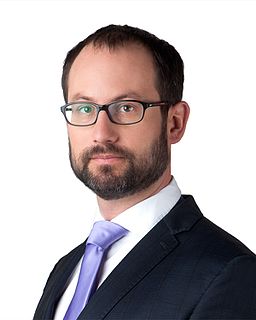 Mayors for the Liberec Region is a regionalist party in the Czech Republic that was established prior to the 2008 Czech regional elections. The party won the 2012 regional election in Liberec and its leader Martin Půta became governor of the Liberec Region, the first time a governor had come from outside one of the major parties. The SLK cooperates with the Mayors and Independents party.

The next Czech legislative election will be held in or before October 2025. All 200 members of the Chamber of Deputies of the Czech Republic will be elected and the leader of the resultant government will become the Prime Minister. 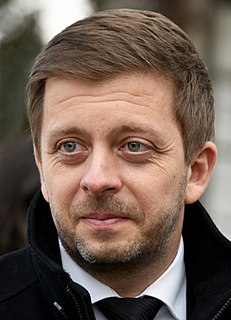 Vít Rakušan is a Czech pedagogue and politician who has served as the leader of the Mayors and Independents (STAN) political party since 2019 and its 1st vice-chairman from 2016 to 2019. He has been a member of the Chamber of Deputies since October 2017; an elected representative of the Central Bohemia Region since 2012, and was the mayor of the City of Kolín from 2010 to 2019. In 2021, he assumed the posts of First Deputy Prime Minister and Minister of the Interior in the cabinet of Petr Fiala. 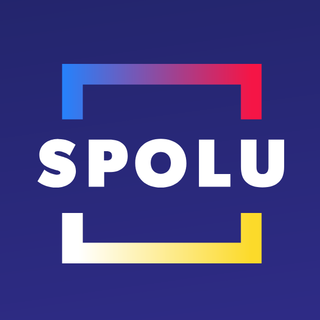 Pirates and Mayors is a liberal progressive centrist political alliance in the Czech Republic, formed for the 2021 legislative election, consisting of the Czech Pirate Party (Piráti) and Mayors and Independents (STAN). As of the 2021 Czech election it governs the Czech Republic in a coalition with the SPOLU alliance.

Election of the Speaker of the Chamber of Deputies of the Parliament of the Czech Republic was held on 10 November 2021.

A leadership election for the Mayors and Independents (STAN) in 2021 was held on 31 August 2021. The incumbent leader Vít Rakušan was the only candidate and received 96% of votes.

A leadership election for the Mayors and Independents (STAN) in 2019 was held on 13 April 2019. The incumbent leader Petr Gazdík decided to not run for another term and was replaced by Vít Rakušan.

Young Mayors and Independents, is a political youth organisation in the Czech Republic and is the official youth wing of the Mayors and Independents. It consists of young people who share liberal conservative values. It was founded in 2015. One of most prominent members of the organisation is its current leader Tomáš Pavelka who was elected the youngest Mayor in the Czech Republic. Organisation had 90 members in 2018. mSTAN was very active prior 2021 Czech legislative election when it cooperated with Young Pirates during electoral campaign.