Mechi (Nepali : मेची अञ्चल Listen  (help·info) was one of the fourteen zones of Nepal until the restructuring of zones to provinces, comprising four districts; namely Ilam, Jhapa, Panchthar and Taplejung. Its headquarters are at Ilam.[ clarification needed ] It comes under the Eastern Development Region of Nepal. The Indian state of Bihar is to the south, West Bengal and Sikkim in East and Tibet to the north. The largest town is Damak in the Terai. The majority of the population in Mechi are Kirantis (Limbu and Rai) and other ethnic groups like Koche and Meche, and hill castes like Bahun and Chhetris.

Mechi is divided into four districts:

Among the four districts, Jhapa is in the Terai and it is more developed than the other three districts. Ilam and Panchthar are in the hilly region. Ilam is also in a developing stage, with many tourists visiting annually. Kanyam is popular for its tea garden. At Antu the rising sun can be viewed. Panchthar is the least developed of the four districts. Taplejung is in the mountainous zone.[ citation needed ]

There are two airports within Mechi: one in Bhadrapur and one in Taplejung.

Mechi is famous for microcredit development. The Small Farmer Development Programme (SFDP) was the first rural and micro-financing program in Mechi. The Agricultural Development Bank started this SFDP in 1988. It started in a few VDCs and spread. After lifting many people out of poverty, the SFDP was handed over to the local people and the new institution was named Small Farmer Cooperative Ltd (SFCL). There are 13 SFCLs in Mechi, each of which covers a single VDC.

It is one of the major districts for the production of tea and rice. Budhabare is on the northern side of the Mahendra Highway and is one of the most fertile lands of Nepal. Mechi as a district is popular for the bittle nuts (Supari). Several large tea estate are in Mechi. Giri Bandhu Tea Estate, Burne Tea State, Tokla Tea Estate, Himalaya Tea State, Damak, Sattighatta Tea Estate are the major ones.

Nepali tea is a beverage made from the leaves of tea plants grown in Nepal. They are distinctive in appearance, aroma and taste, but are similar in many ways to tea produced in Darjeeling tea, perhaps because the eastern zones of Nepal have geography and topography similar to Darjeeling. Its relatively smaller production quantities mean that teas from Nepal are less well known than those from Darjeeling.

Jhapa is a district of Province No. 1 in eastern Nepal. The latest official data, the 2011 Nepal Census, puts the total population of the district at 812,650. Jhapa is one of the most ethnically diverse districts of the country, and is home to 110 ethnic groups.

Ilam is one of four urban municipalities of Ilam District, which lies in the Mahabharata hilly range of Province No. 1, eastern Nepal. Ilam also acts as the headquarters of Ilam District. Being the largest producer region for Nepali tea, its tea farms comprise a major tourist attraction in Province No. 1. Ilam is also famous for its natural scenery and landscapes as well as its diverse agricultural economy which specializes in horticultural crop production. 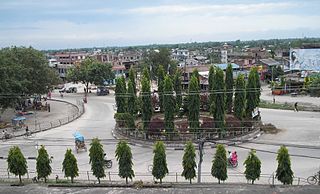 Mechinagar is a municipality in Jhapa District, Province No. 1, Nepal and is the main entry point from India on Nepal's eastern border. Nepal's custom office is in Kakarvitta, a section of the municipality. The city is almost 475 KM south east of the capital city Kathmandu and 115 KM east of the state capital of Province One Biratnagar.

Budhabare, more specifically Hadiya Budhabare, is a village and former Village Development Committee that is now part of Buddhashanti Rural Municipality in Jhapa district of Province No. 1 in south-eastern Nepal. The latest official data, 2011 Nepal Census, puts the total population of the VDC at 22,936. Owing to this average population size, the VDC has been divided into nine wards.

Ekatappa is a town and Village Development Committee in Ilam District in the Mechi Zone of eastern Nepal. At the time of the 1991 Nepal census it had a population of 4,320 persons living in 784 individual households.

Jitpur is a town and Village Development Committee in Ilam District in the Mechi Zone of eastern Nepal. At the time of the 1991 Nepal census it had a population of 5,454 persons residing in 989 individual households.

Phakphok is a town and Village Development Committee (VDC) in Ilam District in the Mechi Zone of eastern Nepal. At the time of the 1991 Nepal census it had a population of 4,233 persons living in 734 individual households.

Bahundangi was a village development committee in Jhapa District in the Mechi Zone of South-Eastern Nepal. From 2017, this VDC is officially merged by Government with Mechinagar Municipality

Haldibari is a village development committee (VDC) in Jhapa District in the Mechi Zone of southeastern Nepal. Haldibari, from Haldi, means besar/turmeric. At the time of the 1991 Nepal census it had a population of 6,407 people living in 1,167 individual households.

Surunga is a trade center of Jhapa District. It is located in Kankai Municipality in Jhapa District in the Mechi Zone of south-eastern Nepal. At the time of the 1991 Nepal census it had a population of 16,747 people living in 2996 individual households. Surunga is one of the rapidly developing towns of Jhapa district. It is situated on the bank of the Kankai River.

Phidim Municipality is the headquarters of the Panchthar District in the Mechi Zone of eastern Nepal. Phidim was upgraded to a 'municipality' from a 'village', when a development committee merged with other VDCs - including the Phidim, Chokmagu and Siwa villages - on May 18, 2014. It offers a route for trekkers and locals, who travel to and from the Taplejung district bordering with the Tibetan Autonomous Region of China. It is also a commercial hub for the rural surroundings.

Province No. 1 is the easternmost of the seven provinces established by the new constitution of Nepal which was adopted on 20 September 2015. With the industrial city of Biratnagar as its headquarter, the province covers other major eastern towns including Dharan, Itahari, Inarua, Birtamod and Damak while being home to some of the most majestic mountains of the country including the Everest, Kanchenjunga, and Ama Dablam. Koshi - the largest river of the nation, circumvents the province's western boundary. Adhering to the first-past-the-post voting system issued by the Constituency Delimitation Commission, the province hosts 28 parliamentary seats and 56 provincial seats.

Mechi Highway is a two-lane freeway in Eastern Nepal, spanning about 268 kilometers in length. The highway connects all the districts of Mechi zone, hence the name Mechi. It runs from the VDC of Kechana in Jhapa district in the south to the remote north of Taplejung through the district of Ilam. The main destinations along the highway include Prithivinagar, Bhadrapur, Duhagadhi, Budhabare, Kanyam, and Phikkal. The highway shares a junction with Mahendra Highway at Charali.

Phakphokthum is a rural municipality, one of six located in Ilam District of Province No. 1 of Nepal. A total of 10 municipalities are found in Ilam, of which 4 are urban and 6 are rural.