Mecklenburg County is a county located in the southwestern region of the state of North Carolina, in the United States. As of the 2010 census, the population was 919,618. It increased to 1,093,901 as of the 2018 estimate, making it the most populous county in North Carolina and the first county in the Carolinas to surpass 1 million in population. [1] Its county seat and largest city is Charlotte. [2]

Mecklenburg County is included in the Charlotte-Concord-Gastonia, NC-SC Metropolitan Statistical Area. On September 12, 2013, the county welcomed its one millionth resident. [3]

Like its seat, the county is named after Charlotte of Mecklenburg-Strelitz, queen of the United Kingdom, whose name is derived from the region of Mecklenburg in Germany, itself deriving its name from Mecklenburg Castle (Mecklenburg meaning "large castle" in Low German) in the village of Dorf Mecklenburg.

Mecklenburg County is a member of the regional Centralina Council of Governments. [14]

The County is governed by the Mecklenburg Board of County Commissioners (BOCC). The BOCC is a nine-member board made up of representatives from each of the six county districts and three at-large representatives elected by the entire county. This electoral structure favors candidates in the at-large positions who will be elected by the majority population of the county. Each District has a population of approximately 165,000 individuals. All seats are partisan and are for 2-year terms (elections occur in even years). The current chairman of the Mecklenburg BOCC is George Dunlap (D, District 3). The Current Vice-Chair is Elaine Powell (D, District 1).

Members of the Mecklenburg County Commission are required by North Carolina State law to choose a Chair and Vice-Chair once a year (at the first meeting of December). Historically, the individual elected was the 'top-vote-getter' which was one of three (3) at-large members. In 2014 this unofficial rule was changed by the Board to allow any member to serve as Chair or Vice-chair as long as they received support from 4 members plus their own vote.

The nine members of the Board of County Commissioners are: [15]

Prior to 1928, Mecklenburg County was strongly Democratic similar to most counties in the Solid South. 1928 marked the start of a long stretch where the county was a national bellwether in most elections up through 2000, only voting against the national winner in 1960 & 1992. From 2004 on, the county has returned to being solidly Democratic as a diverse urban county, with John Kerry's narrow win in 2004 being a prelude to Barack Obama & Hillary Clinton's landslide wins in the county in the following elections.

The second largest school system in North Carolina behind Wake County Public Schools. The current Chairman of the Charlotte-Mecklenburg School board is Mary T. McCray (At-Large). The Vice Chair is Ericka Ellis-Stewart (At-Large). The members of the Board of Education are:

The Charlotte-Mecklenburg School board is non-partisan, and staggered elections are held every two years (in odd years).

Wachovia, a former Fortune 500 company, had its headquarters in Charlotte until it was acquired by Wells Fargo for $15.1 billion. Wells Fargo maintains the majority of the former company's operations in Charlotte. [24]

Goodrich Corporation, a former Fortune 500 company, had its headquarters in Charlotte until it was acquired by United Technologies Corporation for $18.4 billion. Charlotte is now the headquarters for UTC Aerospace Systems. [25]

The Charlotte-Mecklenburg Schools (CMS) serves the entire county; however, the State of North Carolina also has approved a number of charter schools in Mecklenburg County (independently operated schools financed with tax dollars).

The Public Library of Charlotte and Mecklenburg County serves residents of Mecklenburg County. Library cards from any branch can be used at all 20 locations. The library has an extensive collection (over 1.5 million items) of reference and popular materials including DVDs, books on CD, best sellers, downloadable media, and books.

The Billy Graham Library contains the papers and memorabilia related to the career of the well-known 20th century evangelist, Billy Graham.

With twenty-five freight trains a day, Mecklenburg is a freight railroad transportation center, largely due to its place on the NS main line between Washington and Atlanta and the large volumes of freight moving in and out of the county via truck.

The Crescent train connects Charlotte with New York, Philadelphia, Baltimore, Washington, Charlottesville, and Greensboro to the north, and Atlanta, Birmingham and New Orleans to the south.

The Piedmont train connects Charlotte with Raleigh, Durham and Greensboro.

The Amtrak station is located at 1914 North Tryon Street. A new centralized multimodal train station, Gateway Station, has been planned for the city. It is expected to house the future LYNX Purple Line, the new Greyhound bus station, and the Crescent line that passes through Uptown Charlotte.

Mecklenburg County is the proposed southern terminus for the initial segment of the Southeast High Speed Rail Corridor operating between Charlotte and Washington, D.C. Currently in conceptual design, the SEHSR would eventually run from Washington, D.C. to Macon, Georgia.

Light rail service in Mecklenburg County is provided by LYNX Rapid Transit Services. Currently a 9.6-mile (15.4 km) line running from Uptown to Pineville; build-out is expected to be complete by 2034.

The vintage Charlotte Trolley also operates in partnership with CATS. On July 14, 2015, the Goldrush Streetcar was revived to operate in Uptown after several decades of absence. The line runs from Trade Street, near Charlotte Transportation and Convention Center, to Elizabeth Avenue. In addition to several restaurants, this line also serves Central Piedmont Community College and Novant Health Presbyterian Hospital. The city is applying for a $50 million Federal Transportation Grant to gain funding to construct expansion of a line to serve Johnson C. Smith University to the West and East along Central Avenue.

Mecklenburg's manufacturing base, its central location on the Eastern Seaboard, and the intersection of two major interstates in the county have made it a hub for the trucking industry.

Mecklenburg County contains seven municipalities including the City of Charlotte and the towns of Cornelius, Davidson, and Huntersville (north of Charlotte); and the towns of Matthews, Mint Hill, and Pineville (south and southeast of Charlotte). Small portions of Stallings and Weddington are also in Mecklenburg County, though most of those towns are in Union County. Extraterritorial jurisdictions within the county are annexed by municipalities as soon as they reach sufficient concentrations.

Charlotte is the most populous city in the U.S. state of North Carolina. Located in the Piedmont, it is the county seat of Mecklenburg County. In 2018, the U.S. Census Bureau estimated the population was 872,498, making it the 16th-most populous city in the United States. The Charlotte metropolitan area's population ranks 23rd in the U.S., and had a population of 2,569,213, in 2018. The Charlotte metropolitan area is part of a sixteen-county market region or combined statistical area with a 2018 census-estimated population of 2,728,933.

Mecklenburg County is a county located in the Commonwealth of Virginia. As of the 2010 census, the population was 50,727. Its county seat is Boydton.

Cabarrus County is a county located in the south-central part of the U.S. state of North Carolina. As of the 2010 census, the population was 178,011. The county seat is Concord, which was incorporated in 1803.

Pineville is a suburban town in the southernmost portion of Mecklenburg County, North Carolina situated in the Waxhaws district between Charlotte, North Carolina and Fort Mill, South Carolina.

Harrisburg, a northeastern suburb of Charlotte, is a town in Cabarrus County, North Carolina, United States. The population was estimated to be 16,075 as of 1 July 2018. 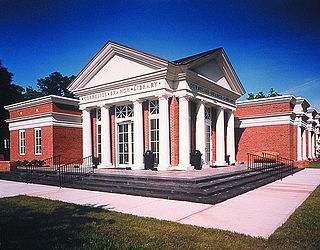 Cornelius is a lakeside town located along Lake Norman in northern Mecklenburg County, North Carolina, United States. The population was 24,866 at the 2010 census. 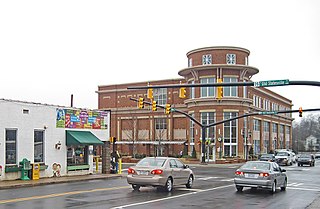 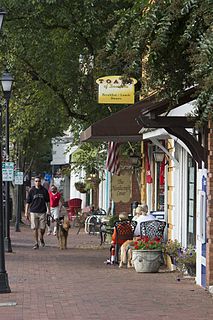 Interstate 485 (I-485) is an Interstate Highway loop encircling Charlotte, North Carolina. Completion of the last segment of the highway occurred on June 5, 2015. 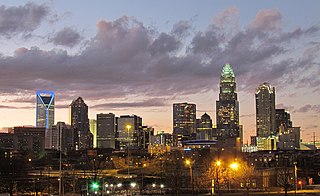 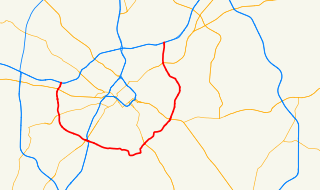 Route 4 is an 18.6-mile (29.9 km) partial ring road located in Charlotte, North Carolina. Beginning and ending with Interstate 85 (I-85), it loops south around Uptown Charlotte along state-maintained secondary roads, connecting the Charlotte Douglas International Airport and several city neighborhoods including Madison Park, Myers Park, Windsor Park and Sugar Creek. The route is posted by the Charlotte Department of Transportation (CDOT), using a modified pentagonal county road shield, with a green background and the city's crown logo above the number. The loop has a radius of about 4 miles (6.4 km), hence the number.

Discovery Place Science is a science and technology museum for visitors of all ages located in the Uptown area of Charlotte, North Carolina. Discovery Place Science brings science to life through hands-on interactive exhibits, thrilling activities and experiments, an IMAX Dome Theatre, and boundless other educational opportunities and programs. The Museum, which first opened in 1981, underwent an 18-month, $31.6 million renovation in 2010 that transformed it into a reimagined state-of-the-art science and technology museum.

Charles Jeter, is an American politician and business executive. He is known for having founded Team Racing Auto Circuit (TRAC). He also is the President of Intermodal FCL, Inc. A Republican, he represented District 92 in the North Carolina House of Representatives from Jan. 2013 until his abrupt resignation on July 25, 2016.

Novant Health is a four-state integrated network of physician clinics, outpatient centers and hospitals. Its network consists of more than 1,600 physicians and 28,000 employees at more than 630 locations, including 15 medical centers and hundreds of outpatient facilities and physician clinics. The organization was formed on 1 July 1997 by the merger of Carolina Medicorp of Winston-Salem, North Carolina and Presbyterian Health Services of Charlotte, North Carolina. Headquartered in Winston-Salem, North Carolina, Novant Health serves more than 4 million patients annually. In 2019, Novant Health was ranked #38 in Forbes' annual ranking of America's Best Employers for Diversity, #3 in Diversity MBA Magazine's annual ranking of Best Places to Work for Women & Diverse Managers, and #6 in North Carolina in Forbes' annual ranking of America's Best Employers by State.

Pat Cotham, At Large, is serving her third term on the Mecklenburg Board of County Commissioners. During her first term she served as Chair of the Board. She earned a BA in Spanish and a BJ in journalism from the University of Missouri.