Medagama is a village in Sri Lanka. It is located within the Uva Province. It is placed in the middle of a mountain range.This is the reason it's named Medagama (Meda=middle Gama=Village).

Bank of Ceylon is a government-owned, major commercial bank in Sri Lanka. Its head office is located in an iconic cylindrical building in Colombo, the political and commercial capital of the island.

Lunugala is a town in the Sri Lankan province of Uva.There are 26 Grama Niladhari Divisions in the Lunugala Divisional Secretariat Division Maddegama is a village in the western province, Sri Lanka of Sri Lanka. It is located next to the Kirindiwela-Hanwella road.

Haburugala is a small town in Sri Lanka. It is located within Southern Province. Sri Punyarathana Dhamma School in Choola Bodhi Viharaya Buddhist temple, Dharmaraja Vidyalaya, Elakaka Maha Vidyalaya schools are situated in Haburugala. Most of the villagers are farmers who spend their time on paddy fields. The path to the village is surrounded by beautiful scenes such as Dedduwa river, Bentotat river, Bentota beach, Dedduwa marshland. Typical day has the temperature around 26 degrees Celsius.

Urumuththa Almeda Maha Vidyalaya is a government school for boys and girls in Urumuththa Akuressa, Sri Lanka that is located in the Akuressa Road Urumuththa Village. The college is situated in a hilly area, close to Akuressa main road with natural surroundings. The college was initially founded as a Buddhist school in 1930. The college presently consists of over 1000 students with children studying from primary level to secondary level education with a faculty of 40 teachers. 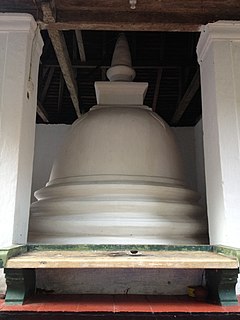 Pusulpitiya Raja Maha Vihara is an ancient Buddhist temple which is located in Pusulpitiya village, Nuwara Eliya District, Sri Lanka. It is situated in Kotmale about 3 miles from Morape on the banks of the Kotmale Oya. Currently this temple has been recognized as an archaeological protected site in Sri Lanka.

Buddama Raja Maha Vihara is a historic Cave temple in Buddama village, Monaragala district, Sri Lanka. Buddama is a rural village lying off Siyambalanduwa town and known as one of early settlements in the country. Currently the temple has been formally recognised by the Government as an archaeological site in Sri Lanka. 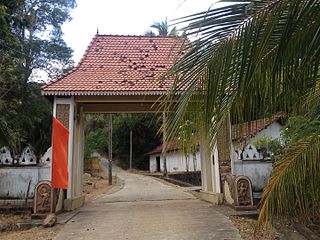 Nikasala Aranya Senasanaya or Nikasala Forest Hermitage is an ancient Cave temple in Panduwasnuwara DS, Sri Lanka. The temple is situated at Dematawakanda in Kanduboda-Moragane Village, about 5 km (3.1 mi) far from the ancient kingdom of Panduwasnuwara. The monastery has been formally recognised by the Government as an archaeological site in Sri Lanka. The designation was declared on 6 July 2007 under the government Gazette number 1505.

Tomb of Vijaya is an ancient monument, situated on the hillock of Medagama Kanda, Panduwasnuwara DS in Sri Lanka. The monument site consists of a stupa shaped circular structure which is traditionally believed to be the tomb of King Vijaya, the first recorded ruler of Sri Lanka. The hillock of Medagama Kanda lies about 6 km (3.7 mi) south-east of the ancient kingdom, Panduwasnuwara and is surrounded by another two historic temples, Nikasala Aranya Senasanaya and Kande Medagama Raja Maha Vihara. In 2007 the monument was formally recognised by the Government as a protected archaeological site in Sri Lanka.