The megabit is a multiple of the unit

The megabit has the unit symbol Mbit.

The megabit is closely related to the mebibit, a unit multiple derived from the binary prefix mebi (symbol Mi) of the same order of magnitude, [2] which is equal to 220bits = 1048576bits, or approximately 5% larger than the megabit. Despite the definitions of these new prefixes for binary-based quantities of storage by international standards organizations, memory semiconductor chips are still marketed using the metric prefix names to designate binary multiples.

Using the common byte size of eight bits and the standardized metric definition of megabit and kilobyte, 1 megabit is equal to 125  kilobytes (kB) or approximately 122  kibibytes (KiB).

A binary prefix is a unit prefix for multiples of units in data processing, data transmission, and digital information, notably the bit and the byte, to indicate multiplication by a power of 2. 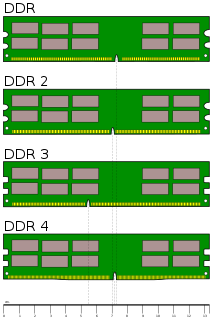 Kilo is a decimal unit prefix in the metric system denoting multiplication by one thousand (103). It is used in the International System of Units, where it has the symbol k, in lower case.

The kilobit is a multiple of the unit bit for digital information or computer storage. The prefix kilo- (symbol k) is defined in the International System of Units (SI) as a multiplier of 103 (1 thousand), and therefore,

Mega is a unit prefix in metric systems of units denoting a factor of one million (106 or 1000000). It has the unit symbol M. It was confirmed for use in the International System of Units (SI) in 1960. Mega comes from Ancient Greek: μέγας, romanized: megas, lit. 'great'.

The kibibyte is a multiple of the unit byte for digital information. The binary prefix kibi means 210, or 1024; therefore, 1 kibibyte is 1024 bytes. The unit symbol for the kibibyte is KiB.

The gigabit is a multiple of the unit bit for digital information or computer storage. The prefix giga (symbol G) is defined in the International System of Units (SI) as a multiplier of 109 (1 billion, short scale), and therefore

The mebibit is a multiple of the bit, a unit of information, prefixed by the standards-based multiplier "mebi" (symbol Mi), a binary prefix meaning 220. The unit symbol of the mebibit is Mibit.

File size is a measure of how much data a computer file contains or, alternately, how much storage it consumes. Typically, file size is expressed in units of measurement based on the byte. By convention, file size units use either a metric prefix or a binary prefix.

In telecommunications, data-transfer rate is the average number of bits (bitrate), characters or symbols (baudrate), or data blocks per unit time passing through a communication link in a data-transmission system. Common data rate units are multiples of bits per second (bit/s) and bytes per second (B/s). For example, the data rates of modern residential high-speed Internet connections are commonly expressed in megabits per second (Mbit/s).

This article presents a timeline of binary prefixes used to name memory units, in comparison of decimal and binary prefixes for measurement of information and computer storage.