Mehmed VI Vahideddin (Ottoman Turkish : محمد السادس‎Meḥmed-i sâdis, وحيد الدين‎Vahideddin, Turkish : Vahideddin or Altıncı Mehmet), who is also known as Şahbaba (meaning "Emperor-father") among his relatives, (14 January 1861 – 16 May 1926) was the 36th and last Sultan of the Ottoman Empire, reigning from July 4, 1918 until November 1, 1922 when the Ottoman Empire dissolved after World War I and became the nation of the Republic of Turkey on October 29, 1923. The brother of Mehmed V, he became heir to the throne after the 1916 suicide of Abdülaziz's son Şehzade Yusuf Izzeddin as the eldest male member of the House of Osman. He acceded to the throne after the death of Mehmed V. [1] He was girded with the Sword of Osman on 4 July 1918, as the thirty-sixth padishah . His father was Sultan Abdulmejid I and mother was Gülüstü Hanım (1830 – 1865), an ethnic Abkhazian, daughter of Prince Tahir Bey Çaçba and his wife Afişe Lakerba, originally named Fatma Çaçba. [2] Mehmed stepped down when the Ottoman Sultanate was abolished in 1922, and the secular Republic of Turkey was created with Mustafa Kemal Ataturk as the first president.

Mehmed VI was born at the Dolmabahçe Palace, in Constantinople on January 14, 1861. [3] [4] Mehmed's father died when Mehmed was only five months old, and Mehmed's mother died when he was four years old.

The First World War was a disaster for the Ottoman Empire. British and allied forces had conquered Baghdad, Damascus, and Jerusalem during the war and most of the Ottoman Empire was divided amongst the European allies. At the San Remo conference of April 1920, the French were granted a mandate over Syria and the British were granted one over Palestine and Mesopotamia. On 10 August 1920, Mehmed's representatives signed the Treaty of Sèvres, which recognised the mandates and recognised Hejaz as an independent state.

Turkish nationalists rejected the settlement by the Sultan's four signatories. A new government, the Turkish Grand National Assembly, under the leadership of Mustafa Kemal (Atatürk) was formed on 23 April 1920, in Ankara (then known as Angora). The new government denounced the rule of Mehmed VI and the command of Süleyman Şefik Pasha, who was in charge of the army commissioned to fight for the empire against the Turkish National Movement (the Kuvâ-i İnzibâtiyye); as a result, a temporary constitution was drafted.

The Grand National Assembly of Turkey abolished the Sultanate on 1 November 1922, and Mehmed VI was expelled from Constantinople. Leaving aboard the British warship Malaya on 17 November, he went into exile in Malta; Mehmed later lived on the Italian Riviera.

On 19 November 1922, Mehmed's first cousin and heir Abdulmejid Efendi was elected caliph, becoming the new head of the Imperial House of Osman as Abdulmejid II before the Caliphate was abolished by the Turkish Grand National Assembly in 1924.

Mehmed died on 16 May 1926 in Sanremo, Italy, and was buried at the Tekkiye Mosque of Sultan Suleiman the Magnificent in Damascus. [5]

Abdulmejid II was the last Caliph of Ottoman Dynasty, nominally the 37th Head of the Ottoman Imperial House from 1922 to 1924.

Anchabadze, also known as Achba, is an Abkhaz-Georgian family, and the oldest surviving noble house originating in Abkhazia.

Abdülmecid I or Tanzimatçı Sultan Abdülmecid due to the Tanzimat reforms he conducted, he is also known as Abdulmejid and similar spellings, was the 31st Sultan of the Ottoman Empire and succeeded his father Mahmud II on 2 July 1839. His reign was notable for the rise of nationalist movements within the empire's territories. Abdulmejid wanted to encourage Ottomanism among the secessionist subject nations and stop the rise of nationalist movements within the empire, but failed to succeed despite trying to integrate non-Muslims and non-Turks more thoroughly into Ottoman society with new laws and reforms. He tried to forge alliances with the major powers of Western Europe, namely the United Kingdom and France, who fought alongside the Ottoman Empire in the Crimean War against Russia. 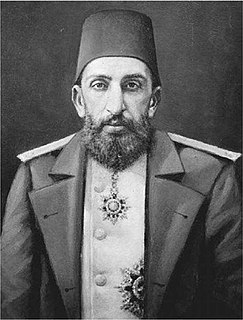 Abdul Hamid II was the 34th Sultan of the Ottoman Empire and the last Sultan to exert effective control over the fracturing state. He oversaw a period of decline, with rebellions particularly in the Balkans, and he had an unsuccessful war with the Russian Empire followed by a successful war against the Kingdom of Greece in 1897. Hamid II ruled from August 31, 1876 until he was deposed shortly after the 1908 Young Turk Revolution, on April 27, 1909. In accordance with an agreement made with the Republican Young Ottomans, he promulgated the first Ottoman Constitution of 1876 on December 23, 1876, which was a sign of progressive thinking that marked his early rule. Later, however, he noticed Western influence on Ottoman affairs and citing disagreements with the Parliament, suspended both the short-lived constitution and Parliament in 1878 and accomplished highly effective power and control.

Esma Sultan was an Ottoman princess, the daughter of Sultan Abdülaziz and Gevheri Kadın. 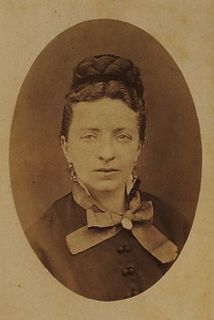 Gülüstü Hanım was the nineteenth wife of Sultan Abdulmejid I, and the mother of Sultan Mehmed VI, the last Sultan of the Ottoman Empire.

Şehzade Yusuf Izzeddin was an Ottoman prince, the son of Sultan Abdülaziz and his first wife Dürrünev Kadın.

Nazikeda Kadın, meaning 'One of delicate manners', known as the last empress, was the first wife and chief consort of the last sultan, Mehmed VI of the Ottoman Empire.

Şehzade Mehmed Selaheddin was an Ottoman prince, the only son of Sultan Murad V, and his second wife Reftarıdil Kadın. 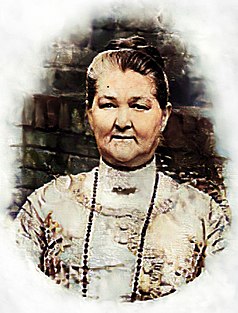 Şayeste Hanım was the seventeenth wife of Sultan Abdulmejid I of the Ottoman Empire.

Müveddet Kadın was the third wife of Sultan Mehmed VI of the Ottoman Empire.

Bedrifelek Kadın was the second wife and chief consort of Sultan Abdul Hamid II of the Ottoman Empire.

Nükhetseza Hanım was the ninth wife of Sultan Abdulmejid I of the Ottoman Empire. 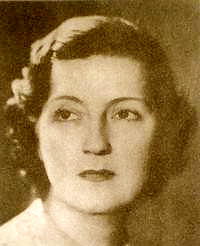 Sabiha Sultan was an Ottoman princess, the daughter of Sultan Mehmed VI and his first wife Nazikeda Kadın. She was the first wife of Şehzade Ömer Faruk, son of the last Caliph of the Muslim world, Abdulmejid II and Şehsuvar Hanım.

Şehzade Ahmed Kemaleddin was an Ottoman prince, son of Sultan Abdulmejid I and his seventh wife Verdicenan Kadın.

Şehzade Mehmed Selim was an Ottoman prince, the son of Sultan Abdul Hamid II and his wife Bedrifelek Kadın.

Şehzade Mehmed Abdülkadir was an Ottoman prince, the son of Sultan Abdul Hamid II and his wife Bidar Kadın.

Ulviye Sultan was an Ottoman princess, the daughter of Sultan Mehmed VI and Nazikeda Kadın.