Mehmed Esad Pasha (18 October 1862 – 2 November 1952), known as Mehmet Esat Bülkat after the 1934 Surname Law, was an Ottoman general active during the First Balkan War, where he led the Yanya Corps, and in World War I, where he was the senior Ottoman commander in the Dardanelles Campaign.

Mehmed Esad was born into an Albanian Muslim family in Yanya (now Ioannina) on October 18, 1862, the son of Mehmed Emin Efendi, who had served as mayor of the city. [1] [2] According to Jacques Kayaloff, he was of Albanian origin. [1] His brother, also an Albanian Mehmed Wehib (1877–1940), also became a distinguished general.

Esad spent the first seventeen years of his life in Yanya and later attended the military school at Monastir (modern Bitola). [2] While there Esad's knowledge of Ottoman Turkish was limited and he took additional lessons to broaden his competency in the language. [2] He would reflect later in life that local Muslims of Yanya barely had any knowledge of Turkish. [2] Having polished up his skills in Ottoman Turkish [2] Esad attended the Ottoman Military Academy, graduating in 1884. After a period of service in a regiment, he was selected for the Ottoman Military College in 1887, graduating as a General Staff officer in 1890. His excellent performance led to his immediate dispatch to attend the Prussian War Academy in Berlin, from where he graduated in May 1894. [3] After a stint at the General Staff, he was promoted to Lt Colonel and given a teaching position at the War Academy. By the time the Greco-Turkish War of 1897 broke out, he had been promoted to Colonel, and he commanded a regiment during the war. In 1899, he was placed as head of training at the War Academy. In 1901 he was promoted to Mirliva (Brigadier) and to Ferik (Major General) in 1906. From 1907 he served as Chief of Staff of the Third Army at Thessaloniki. [4]

In 1911, he commanded the 5th Regular (Redif) Division at Gallipoli for a short period before returning to Yanya to command the 23rd Regular Division. It was at this post that the outbreak of the First Balkan War found him. [2] Esat was immediately detached from divisional command and placed in charge of the provisional Yanya Corps, tasked with defending the well-fortified city and the wider region of Epirus. Esad succeeded in defending Yanya for several months against the Greek Army, but was finally forced to capitulate after the Battle of Bizani on 4–6 March 1913. [4] [2]

Esat remained in Greek captivity as a prisoner of war until 2 December 1913. His defence of Yanya however had earned him the status of a popular hero, as well as the honorific title of "Pasha". Almost immediately upon his return, on 10 December, he was appointed commander of the III Corps at Gallipoli, which he would lead into battle during the Gallipoli Campaign. [3] The III Corps quickly established itself as one of the most combat-worthy formations in the Ottoman army, as most of its units and soldiers had recent fighting experience from the Balkan Wars. It is indicative that when the Ottoman Army mobilized upon its entry in World War I, Esad's corps was the only one to do so within the prescribed timeframe. [3]

Although most accounts of the Battle of Gallipoli tend to focus on the role of Fifth Army's commander, German general Liman von Sanders, and on Mehmed Esad's subordinate, Mustafa Kemal Pasha (better known as Atatürk, the founder of modern Turkey), [5] it was Mehmed Esad who prepared the Ottoman defences during the battle, and who actively commanded the Ottoman army in the Gallipoli peninsula during the battle. [6] [2] In October 1915, Esad was appointed as CO of First Army, succeeding Colmar Freiherr von der Goltz, who was dispatched to the Mesopotamian front. In late 1917, Esad visited Germany and toured the German fronts. In February 1918 he was placed in command of the Fifth Army, and in June, of the Third Army on the Caucasus front. After the Armistice of Mudros, and until his retirement on 22 November 1919, he served as Inspector-General of the mostly demobilized Second Army.

In 1920, Esad Pasha served as Navy Minister in the short-lived cabinet of Hulusi Salih Pasha. In 1934, due to the Surname Law he adopted the name "Bülkat". He died in Istanbul in 1952. A selection of his memories was published in 1975 [7] under the title Esat Paşa'nın Çanakkale Anıları (Esat Pasha's Çanakkale Memoirs). 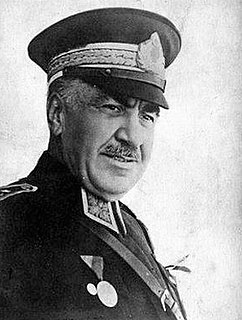 The Battle of Pente Pigadia or Battle of Beshpinar, took place on 24–30 October (O.S.), 1912. It was a battle fought between Greek forces under Lieutenant General Konstantinos Sapountzakis and Ottoman forces under General Esad Pasha during the First Balkan War. The battle began when the Ottomans attacked Greek positions at Anogi. Early snowfall prevented the Ottomans from launching a big offensive, while the Greeks managed to hold their ground for six days in the ensuing series of skirmishes. 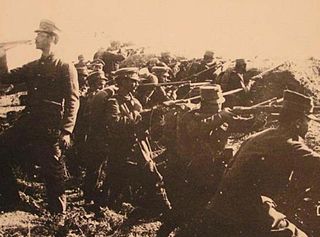 The Battle of Bizani took place in Epirus on 4–6 March [O.S. 19–21 February] 1913. The battle was fought between Greek and Ottoman forces during the last stages of the First Balkan War, and revolved around the forts of Bizani, which covered the approaches to Ioannina, the largest city in the region.

Esad Pasha or Essad Pasha may refer to:

Wehib Pasha also known as Vehip Pasha, Mehmed Wehib Pasha, Mehmet Vehip Pasha, was a general in the Ottoman Army. He fought in the Balkan Wars and in several theatres of World War I. In his later years, he acted as a military advisor to the Ethiopian army in the Second Italo-Abyssinian War.

The Second Army of the Ottoman Empire was one of the field armies of the Ottoman Army. It was formed in the late 19th century during Ottoman military reforms.

The Siege of Scutari took place from October 28, 1912 to April 23, 1913, when the army of Kingdom of Montenegro defeated the forces of the Ottoman Empire and invaded Shkodër.

Hasan Izzet Pasha was a general of the Ottoman Empire.

The Battle of Merhamli was part of the First Balkan War between the armies of Bulgaria and the Ottoman Empire which took place on 14/27 November 1912. After a long chase throughout Western Thrace the Bulgarian troops led by General Nikola Genev and Colonel Aleksandar Tanev surrounded the 10,000-strong the Kırcaali Detachment under the command of Mehmed Yaver Pasha. Attacked in the surrounding of the village Merhamli, only a few of the Ottomans managed to cross the Maritsa River. The rest surrendered in the following day on 28 November.

The First Army or First Guards Army of the Ottoman Empire was one of the field armies of the Ottoman Army. It was formed in the middle 19th century during Ottoman military reforms.

The Yanya Corps or Independent Yanya Corps of the Ottoman Empire was one of the major formations under the command of the Ottoman Western Army. It was formed in Yanya area during the First Balkan War. Its commander was Esat Pasha. It fought the battles of Gribovo and Pente Pigadia against the Greek Army of Epirus. Pushed back to the Yanya Fortified Area, it held out against two Greek assaults but was eventually defeated and capitulated at the Battle of Bizani in 4–6 March 1913. 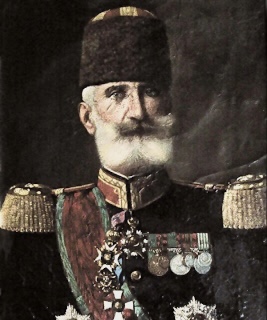 Hasan Tahsin Pasha (1845–1918) was a senior Albanian Ottoman military officer, who served in Yemen and in the First Balkan War.

Faik Pasha, also known as Ahmed Faik or Sulejmani Faik from his Albanian origin, was a general of the Ottoman Army, and the grandmaster of Freemasonry in the Ottoman Empire.

The 3rd Corps is a field corps of the Turkish Army and the NATO Rapid Deployable Corps-Turkey (NRDC-T). Headquartered at Ayazaga, Şişli in Istanbul, it is part of the First Army. It was established at Kirklareli on March 14, 1911, in the Ottoman Empire. It took part in the First Balkan War, the Second Balkan War, the Gallipoli Campaign, operations in the Caucasus 1916–1917, and operations in Palestine in 1918. It then took part in the Battles of Kutahya and Sakarya in 1921, and the Great Assault of 1922.

The Ottoman Army was reorganized along modern Western European lines during the Tanzimat modernization period and functioned during the decline and dissolution period that is roughly between 1861 and 1918, end of World War I for the Ottomans. The last reorganization occurred during the Second Constitutional Era. 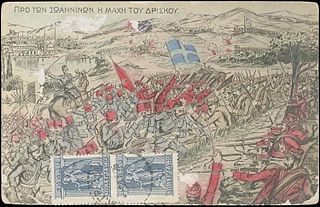 The Battle of Driskos, took place on 26–28 November (O.S.), 1912. It was a battle fought between Greek forces under Alexandros Romas and Ottoman forces under General Esad Pasha during the First Balkan War. The battle began when the Greek army attacked the Ottoman defensive line at the Hani of Kamber Aga.