Meinhardt Schomberg, 3rd Duke of Schomberg, 1st Duke of Leinster, KG (30 June 1641 – 16 July [ O.S. 5 July] 1719), was a general in the service of Willem, Prince of Orange and Stadtholder of Holland, later King William III of England. He fought in the Franco-Dutch War, then played a crucial role at the Battle of the Boyne in July 1690 during the Williamite War in Ireland and finally commanded the British troops deployed to Portugal during the War of the Spanish Succession.

Born the son of Frederick Schomberg, 1st Duke of Schomberg (who was of Huguenot descent), and Johanna Elizabeth de Schomberg (née von Schönberg), Meinhardt Schomberg joined his father in the service of the English Expeditionary brigade to Portugal and served as a lieutenant-colonel and then as a colonel. [1] He then settled in La Rochelle with his father and became a French subject. [1] He attained the rank of brigadier and, afterwards, maréchal de camp (major general), during the Franco-Dutch War in 1678. [1] He fought under Marshal François de Créquy at the Battle of Kochersburg in October 1677, the Battle of Freiburg im Breisgau on 14 November 1677, at the Battle of Rheinfelden in July 1678 and at the Battle of Kinzing later that month, before serving under Frederick William, Elector of Brandenburg as a general of cavalry. [1]

He served under his father during the Williamite War in Ireland, fighting against the Jacobite Irish Army. Frederick Schomberg was second in command of William's army at the Battle of the Boyne in July 1690. [3] Meanwhile, Meinhardt Schomberg commanded the right wing of William's army during the battle and led the crucial crossing of the River Boyne at Roughgrange near Rosnaree [4] on the Jacobites' flank, the turning point in the confrontation, despite a gallant defence by Sir Neil O'Neill, a Jacobite general. [5] Schomberg then engaged in a pursuit of the retreating troops towards Duleek: [5] there were no casualties amongst his regiment's soldiers. [2] Schomberg's father died during the latter stages of the Battle which resulted in a decisive Williamite victory. [2]

Meinhardt Schomberg was created Duke of Leinster for his part in the Battle on 30 June 1690 [6] and, after taking part in the abortive Siege of Limerick in August 1690, he became a British subject through naturalization by Act of Parliament on 25 April 1691. [7] From May 1691 he was also made Commander-in-Chief of the Forces during the King's travels in Flanders. [6] In Spring 1693 Schomberg was placed in command of the abortive descent on Saint-Malo and in October 1693 he inherited the title of Duke of Schomberg following the death of his younger brother Charles Schomberg at the Battle of Marsaglia. [1] In 1698 he moved into Schomberg House, a new mansion specially commissioned for him on the south side of Pall Mall, London. [8]

In 1703, he was created Knight of the Garter [9] and Queen Anne appointed him Commander-in-Chief of the British forces sent to Portugal for the War of the Spanish Succession. [6] Once in Portugal Schomberg was ineffective, simply allowing the Spanish General Tserclaes de Tilly to pass by unchallenged. [1] Moreover, Schomberg had a dreadful temper which attracted universal disgust: neither Peter II, King of Portugal, nor Charles, claimant to the throne of Spain, were prepared to accept his turbulent behaviour and he was sent home in disgrace. [6]

Meinhardt Schomberg had an interest in naval matters and registered a patent concerning inspecting the fishing for wrecks. [10] He commissioned the construction of Hillingdon House in 1717 as his hunting lodge [11] and died there on 16 July [ O.S. 5 July] 1719. [1] He had no male issue so all of his titles (Duke of Schomberg, Duke of Leinster, Marquess of Harwich, Earl of Brentford, Earl of Bangor, Baron Teyes and Count of Mértola) [9] except Count of Mértola died with him. [6]

The town of Schomberg, Ontario was renamed to commemorate the 3rd Duke of Schomberg in 1862. [12]

On 3 August 1667, Schomberg married firstly Piedmontese Barbara Luisa Rizzi: the couple did not have any children. [1] On 4 January 1682 Schomberg married secondly Raugräfin Karoline Elisabeth (a daughter of Charles I Louis, Elector Palatine) and together they had four children: [1] 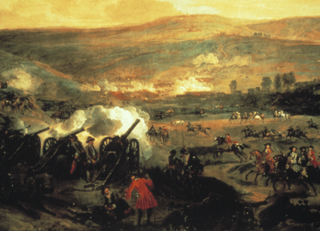 The Battle of the Boyne was a battle in 1690 between the forces of the deposed King James II of England and Ireland, VII of Scotland and those of King William III who, with his wife Queen Mary II, had acceded to the Crowns of England and Scotland in 1689. The battle took place across the River Boyne close to the town of Drogheda in the Kingdom of Ireland, modern-day Republic of Ireland, and resulted in a victory for William. This turned the tide in James's failed attempt to regain the British crown and ultimately aided in ensuring the continued Protestant ascendancy in Ireland. 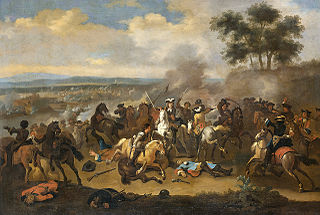 "The Boyne Water" is an Ulster Protestant folksong by an anonymous lyricist. The lyrics of the song commemorate King William III of Orange's victory over James II at the Battle of the Boyne in 1690, part of the Williamite War in Ireland. The song's tune is noted for being played by Ulster loyalist marching bands. 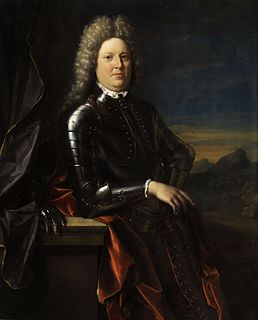 Friedrich Hermann von Schönberg, 1st Duke of Schomberg, 1st Count of Mertola, was a Marshal of France and a General in the English and Portuguese Army. He was killed at the Battle of the Boyne in 1690.

Duke of Schomberg in the Peerage of England was created in 1689. The title derives from the surname of its holder. 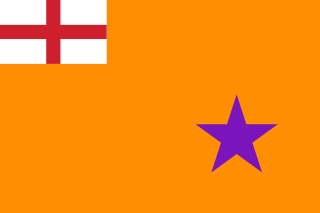 A Williamite is a follower of King William III of England who deposed King James II and VII in the Glorious Revolution. William, the Stadtholder of the Dutch Republic, replaced James with the support of English Whigs.

Limerick, a city in western Ireland, was besieged twice in the Williamite War in Ireland, 1689-1691. On the first of these occasions, in August to September 1690, its Jacobite defenders retreated to the city after their defeat at the Battle of the Boyne. The Williamites, under William III, tried to take Limerick by storm, but were driven off and had to retire into their winter quarters.

Events from the year 1689 in Ireland.

Events from the year 1690 in Ireland.

George Warter Story (1664?–1721) was an English clergyman, known for his history of the Williamite War in Ireland, of which he was an eye witness.

The Battle of Cavan took place in Cavan, Ireland on 11 February 1690 between forces of Williamite and Jacobite troops during the Williamite War in Ireland. It ended in a victory for the Protestant Williamites who captured, sacked and burned the town of Cavan before withdrawing to their forwarding base at Belturbet and further afield Enniskillen.

The Siege of Carrickfergus took place in August 1689 when a force of Williamite troops under Marshal Schomberg landed and laid siege to the Jacobite garrison of Carrickfergus in Ireland. After a week the Jacobites surrendered, and were allowed to march out with the honours of war.

Sir Charles Carney was an Irish professional soldier, who later in his career became a Jacobite. He served as an officer in the Irish Army of James II during the Williamite War in Ireland.

The Raid on Newry took place in November 1689 during the Williamite War in Ireland when a Franco-Irish force loyal to James II attacked the Williamite garrison of Newry in County Down. The Raid was carried out by the French Major General Alexandre de Rainier de Droue, Marquis de Boisseleau a French officer serving with James' Irish Army. It was largely unsuccessful and the Jacobite forces withdrew having suffered casualties.

The Battle of the Boyne is a 1778 historical painting by the Anglo-American artist Benjamin West. It portrays the Battle of the Boyne which took place in Ireland in 1690. West's depiction of William of Orange on his white horse became the iconic image of liberation from Catholic Ireland; the painting was widely copied and distributed throughout the nineteenth century. The painting itself is at Mount Stewart, Newtownards, Northern Ireland, and is the property of the National Trust.

The Capture of Waterford took place in July 1690 during the Williamite War in Ireland when a force under the command of Percy Kirke captured the town of Waterford from its Jacobite Irish Army garrison. Full control of the town was not secured until Duncannon Fort across Waterford Harbour was also taken from its garrison under Michael Burke shortly afterwards. In both cases the garrisons were allowed to march out under escort to Jacobite-held Mallow in County Cork, but were denied the "honours of war" which they demanded.

Dundalk Camp was a military camp which served as the headquarters of the Williamite Army under Marshal Schomberg in Autumn 1689 as part of the Williamite War in Ireland. The camp rapidly became notorious for the great loss of life suffered by soldiers due to the exposed conditions, shortage of supplies and inadequate medical facilities.

Richard Brewer was an English army officer of the seventeenth century. In 1688, Brewer took part in the Army Plot against James II during the Glorious Revolution.