Georg Melchior Hoffmann (c. 1679 – 6 October 1715) was a Baroque composer who was influential as the leader at the Collegium Musicum in Leipzig. His compositions have been mistaken for those of Johann Sebastian Bach.

Hoffman was born sometime around 1679 (or 1685 according to some sources) in Bärenstein, Saxony, Germany. [2] His first musical service was as a choirboy in Dresden, under the tutelage of Johann Christoph Schmidt. [2] In 1702 he moved to Leipzig to study law. Simultaneously he joined Georg Philipp Telemann at the Collegium Musicum in Leipzig [2] and acted as the organization's copyist. [3] Hoffmann succeeded Telemann as director of the Collegium Musicum in 1705, a position that did not end until Hoffman's death ten years later. [4] In this position he became an educator, [5] and his students included Gottfried Heinrich Stölzel. [4] He was noted for expanding the orchestra at the Collegium to more than 40 musicians. [6] Other responsibilities included being the organist at the Neukirche, and director of the Leipzig civic opera, for which he composed several works. He is known to have journeyed to England sometime around the years 1709-1710. In 1713 he began to suffer from the malady which would eventually prove fatal. [2] He accepted a position as the organist at the Liebfrauenkirche at Halle in the spring of 1714, but resigned July 12 of that year having never served in that capacity. [2] He married Margaretha Elisabeth Philipp on 9 September 1714. [2] He succumbed to illness, in otherwise prosperous circumstances, on 6 October 1715. [2]

Hoffmann's compositions have been mistaken for the work of J. S. Bach. Research has indicated that an aria for alto, Schlage doch, gewünschte Stunde, BWV 53, and the solo cantata for tenor, Meine Seele rühmt und preist, BWV 189, [7] are likely works by Hoffmann, and of more positive identification is a Magnificat in A minor for solo soprano and small group, which during the 19th century was assigned a BWV number of BWV Anh. 21. [4] He has been sometimes confused with composer Johann Georg Hoffmann  [], although there is no relation. [2] None of his operas survive, but contemporary reviews indicate they were well received. [6] He has been identified as the first composer to use bells in a serious manner. [8]

Cantatas (at least in part based on operas):

Joshua Rifkin has identified Hoffman's style as having "freshness and charm" while noting the "occasional melodic angularity". [4]

Throughout his life as a musician, Johann Sebastian Bach composed cantatas for both secular and sacred use. His church cantatas are cantatas which he composed for use in the Lutheran church, mainly intended for the occasions of the liturgical year. 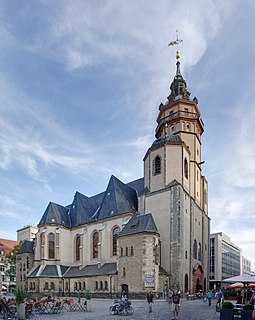 Schlage doch, gewünschte Stunde, BWV 53, is an aria for alto, bells, strings and continuo. It was likely composed in the early 18th century, although its date of first performance is unknown. From the second half of the 18th century until the early 1950s the aria was attributed to Johann Sebastian Bach. In 1955, it was suggested by the Bach scholar Karl Anton that the aria's composer was more likely to be a member of Melchior Hoffmann's circle.

Johann Sebastian Bach worked at the ducal court in Weimar from 1708 to 1717. The composition of cantatas for the Schlosskirche on a regular monthly basis started with his promotion to Konzertmeister in March 1714.

On Trinity Sunday 27 May 1725 Johann Sebastian Bach had presented the last cantata of his second cantata cycle, the cycle which coincided with his second year in Leipzig. As director musices of the principal churches in Leipzig he presented a variety of cantatas over the next three years. New cantatas for occasions of the liturgical year composed in this period, except for a few in the chorale cantata format, are known as Bach's third cantata cycle. His next cycle of church cantatas, the Picander cycle, did not start before St. John's Day 24 June 1728.

Georg Philipp Telemann composed the church cantata Ich will den Kreuzweg gerne gehen, TWV 1:884, for bass, violin and continuo for the 21st Sunday after Trinity. He used a text by Erdmann Neumeister.