Mena is included in the Ark-La-Tex socio-economic region. Surrounded by the Ouachita National Forest, Mena is a gateway to some of the most visited tourist attractions in Arkansas.

Mena was founded by Arthur Edward Stilwell during the building of the Kansas City, Pittsburg and Gulf Railroad (now the Kansas City Southern), which stretched from Kansas City, Missouri to Port Arthur, Texas. Train service to Mena began in 1896.

Stilwell named the town in honor of Folmina Margaretha Janssen-De Goeijen, the wife of his friend and financier Jan De Goeijen, whom Mr. De Goeijen affectionately called Mena. Janssen Park in the center of Mena is also named for her.

Mena was settled in 1896 and incorporated on September 18 of that year. In 1897, the Bank of Mena was founded. The following year, the county seat was moved from nearby Dallas to Mena. Mena's population had grown to 3,423 by 1900. The main industries of the area were timber, agriculture and mineral extraction, though it was advertised as a spa city located within a healthy environment. Stilwell donated land to the city in 1906, and a park and campground were constructed. In 1910, the railroad moved its shop facilities from Mena to Heavener, Oklahoma. This created a loss of eight hundred jobs. A private school in Mena, Hendrix Academy, closed in 1905.

A black community called Little Africa developed on Board Camp Creek east of Mena. The community was small, with a population of 152 in 1900.

In 1901, a black man, Peter Berryman, was lynched after an alleged altercation with a white girl. No one was arrested for the crime. [9] Several other instances of racially motivated hate and violence towards Mena's black community had been noted. This, combined with declining job prospects after the railway shops left town, led many blacks to leave Mena. By 1910, just 16 remained.

The Mena Star advertised the town as being "100% white" in its March 18, 1920 edition, and a local chapter of the Ku Klux Klan was organized in 1922. In 1927, the Mena Commercial Club created advertisements which stated that Mena, in addition to having "pure soft water" and "beautiful scenery", also had "no Negroes".

Like many other communities in Arkansas, Mena had become a sundown town. In the 2010 census, 0.2% of Mena's population was black.

In the 1950s, a government program to stockpile manganese led to the reopening of local mines closed since the 1890s. The program ended in 1959, and the mines again closed. [8]

During the 1980s, drug smuggler Barry Seal moved his operations to the Mena Intermountain Municipal Airport, where he owned and operated many planes and helicopters, as well as advanced radar equipment. [8]

On April 9, 2009, a large and violent tornado devastated the town, killing three and injuring thirty. [10] Many homes and businesses were damaged or destroyed. The Arkansas National Guard was deployed to the affected area. [10] The tornado was rated as a high-end EF3, with winds near 165 mph (266 km/h), and damages estimated at $25 million.

Some of the businesses in the community are working to create a Downtown Arts District in Mena, anchored by the Mena Art Gallery at 607 Mena Street. The gallery is a non-profit organization which exhibits about 12 shows a year ranging from invitational to open shows featuring primarily local artists in a variety of media. There is also an annual Children's Exhibit and a High School Exhibit.[ citation needed ]

Mena's climate is characterized by hot, humid summers and generally mild to cool winters, with precipitation occurring in all seasons. The Köppen Climate Classification subtype for this climate is "Cfa" (Humid Subtropical Climate). [11]

An estimated 1.2 million visitors each year come to Mena to enjoy its nearby natural features, which include the Talimena Scenic Drive, a National Scenic Byway, and the Queen Wilhelmina State Park. The Cossatot River is included in the National Wild and Scenic Rivers System and runs through the Ouachita National Forest. Lake Ouachita, and the Black Fork Mountain Wilderness, are also nearby.

Camp Pioneer is 163 acres (0.66 km2) Boy Scout camp in the foothills of the Ouachita Mountains east of Mena. Camp High Point, a Girl Scout camp is also in the area.

Mena is home of the Mena Gaming Association charity youth organization, founded in 2003.

The local newspaper is the weekly The Mena Star . The Southwest Times Record , based in Fort Smith, is also sold in Mena and covers both the news of the state and the Arkansas River Valley. A statewide daily, the Arkansas Democrat-Gazette , based in Little Rock, is distributed there too.

The big four television stations in Mena are KFSM (CBS), KHBS (ABC), KNWA (NBC) and KFTA (Fox). KARK (NBC, Little Rock) is also available on cable, dating from the times when KNWA's signal did not reach Mena. KNWA is available over-the-air via a digital sub-channel and on satellite.

KXI97 (sometimes referred to as Mena All Hazards) is a NOAA Weather Radio station that serves Mena.

Mena now has a tabloid circular, The Polk County Pulse, owned by KENA Radio. This is distributed free of charge in Mena, coming out each Wednesday.

A monthly historical journal is also published in Mena, "Looking Glass Ouachita Magazine" The monthly is distributed digitally as well as via special editions at local gift shops and restaurants.

In 1996, Patrick Matrisciana, founder of Jeremiah Films and an organization called Citizens for an Honest Government, produced Obstruction of Justice: The Mena Connection.

The protagonist of the movie American Made moves to Mena. The movie itself was initially called "Mena". [21]

Montgomery County is a county located in the U.S. state of Arkansas. As of the 2010 census, the population was 9,487. The county seat is Mount Ida. Montgomery County is Arkansas's 45th county, formed on December 9, 1842, and named after Richard Montgomery, an American Revolutionary War general.

Polk County is a county located in the U.S. state of Arkansas. As of the 2010 census, the population was 20,662. The county seat is Mena. Polk County is Arkansas's 48th county, formed on November 30, 1844, and named for James Polk, President of the United States. It is an alcohol prohibition or dry county. 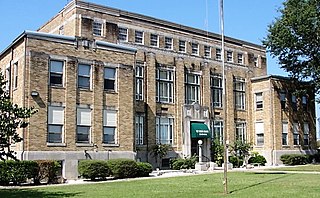 Hot Spring County is a county located in the U.S. state of Arkansas. As of the 2010 census, the population was 32,923. The county seat is Malvern. Hot Spring County was formed on November 2, 1829, from a portion of Clark County. It was named for the hot springs at Hot Springs, Arkansas, which were within its boundaries until Garland County was formed in 1874. It is an alcohol prohibition or dry county. However, there is no record of this law.

Warren is a city in and the county seat of Bradley County, Arkansas, United States. As of the 2010 census, the population was 6,003.

Arkadelphia is a city in Clark County, Arkansas, United States. As of the 2010 census, the population was 10,714. The city is the county seat of Clark County. It is situated at the foothills of the Ouachita Mountains. Two universities, Henderson State University and Ouachita Baptist University, are located there. Arkadelphia was incorporated in 1857.

Dumas is a city in Desha County, Arkansas, United States. The population was 4,706 at the 2010 census.

Malvern is a city in and the county seat of Hot Spring County, Arkansas, United States. Founded as a railroad stop at the eastern edge of the Ouachita Mountains, the community's history and economy have been tied to available agricultural and mineral resources. The production of bricks from locally available clay has earned the city the nickname, "The Brick Capital of the World". The city had a population of 10,318 at the time of the 2010 census, and in 2018 the estimated population was 10,900.

Black Springs is a town in Montgomery County, Arkansas, United States. The population was 114 at the 2000 census. 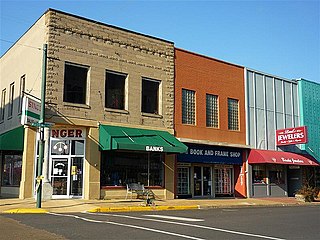 Camden is a city in and the county seat of Ouachita County in the south-central part of the U.S. state of Arkansas. Located on a bluff overlooking the Ouachita River, Camden is a city rich in Civil War history. The city is located around 100 miles (160 km) from Little Rock and 50 miles (80 km) miles north of Louisiana. First known as a French trading post called Ecore à Fabri, its history has been closely tied to the river and it was called the “Queen City” of the Ouachita during the steamboat era. In 1864, Camden became the unintended focus of the Red River Campaign, a major Civil War effort resulting in several significant battles.

Chidester is a city in Ouachita County, Arkansas, United States. The population was 335 at the 2000 census. It is part of the Camden Micropolitan Statistical Area.

Hatfield is a town in Polk County, Arkansas, United States. The population was 402 at the 2000 census.

Vandervoort is a town in Polk County, Arkansas, United States. The population was 120 at the 2000 census. The place is named in honor of the mother of an important early-20th-century railway financier, Jan de Goeijen. Her maiden name was Van der Voort.

De Queen is a city and the county seat of Sevier County, Arkansas, United States. The population was 6,629 at the 2010 census. The placename is the anglicization of the family name of the Dutch merchant and railway financier, Jan de Goeijen (1861–1944). De Goeijen was reportedly rather unhappy with the deformation of his name.

Calion is a second-class city in Union County, Arkansas, United States. The population was 494 at the 2010 census.

Acorn High School is a public high school serving students in grades 6 through 12 that is located in Acorn, an unincorporated area in Polk County, Arkansas, United States, near Mena.

Acorn, Arkansas is an unincorporated community in Polk County, Arkansas, United States, approximately 6 miles north of Mena. The town is located at the junction of U.S. Route 59, U.S. Route 71 and U.S. Route 270 in the northern part of the county. Though Acorn is only a three-way junction, it marks the end of three separate U.S. highway concurrencies: U.S. 59 & 71 from Texarkana, U.S. 59 & 270 from Heavener, Oklahoma, and U.S. 71 & 270 from "Y" City.

Mena High School is an accredited public secondary school located in Mena, Arkansas, United States. The school provides comprehensive education to more than 550 students annually in grades nine through twelve. Mena High School is the largest of four public high schools in Polk County and is the sole high school administered by the Mena School District.

Ouachita River School District (ORSD) is a public school district located along the Ouachita River and is headquartered in Acorn, an unincorporated area in Polk County, Arkansas, United States, near Mena.