Menemenspor, formerly Menemen Belediyespor, is a Turkish professional football club located in the Menemen district of İzmir. The club colours are blue and yellow and they play their home matches at Menemen İlçe Stadium. 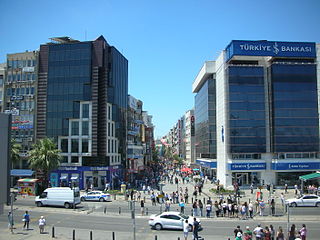 Karşıyaka is a district of İzmir Province in Turkey. The district extends for twelve kilometres along the northern and eastern coastline of the tip of the Gulf of İzmir. Its centre is at a distance of 6 km (4 mi) to the north from the traditional centre of İzmir, which is Konak Square in Konak at the opposite coast. Karşıyaka's district area neighbours the district areas of Menemen to the north, Bornova to the east and Çiğli to the west. Besides being an active venue of commerce, culture and educational actitivies and tourism, Karşıyaka also has an urban culture centred on the sports club Karşıyaka SK, which commands a large and passionate fan base.

Kurdish cuisine consists of a wide variety of foods prepared by the Kurdish people. There are cultural similarities of Kurds and their immediate neighbours in Iran, Turkey, Iraq, Syria, and Armenia. Some dishes, such as biryani, are shared with the Indian subcontinent. Kurdish food is typical of western Asian cuisine.

Aliağa, is a town and a district of Izmir Province in the Aegean Region of Turkey. The town is situated at about 50 km (31 mi) north of Izmir. Aliağa has a big port, mainly for oil and bulk. Its economic activity is based on tourism, shipbreaking and an oil refinery. 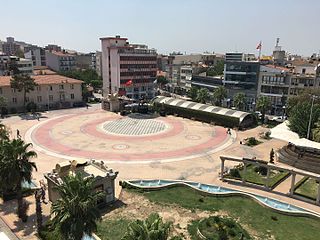 Menemen is a district of İzmir Province in Turkey as well as the district's central town. The district extends on a fertile plain formed by the alluvial soil carried by the Gediz River. Menemen's district area neighbors the following district areas from east to west; Aliağa and Foça to the north and Bornova, Karşıyaka and Çiğli to the south, these last two being among İzmir's metropolitan districts. Menemen district also has a 27 km (17 mi) long coastline in the west and neighbors Manisa Province to the east. The town of Menemen is located at a distance of 35 km (22 mi) from İzmir center. Settlement across the district is loosely scattered along the Greater Metropolitan Area of İzmir in the south and consists of isolated villages along prairies in the north, which results in an average urbanization rate of only 42 per cent. The economy still relies on agriculture and stock breeding in large part, although the production and export of leather, ceramic and other earthenware products, as well as potentially of plastic products, based in two separate and specialized organized industrial zones made important steps forward during the last decade. Menemen's earthenware pottery products are famous across Turkey since centuries. These two organized industrial zones as well as activities rebounding from the adjacent İzmir metropolitan area gain an increasing importance in the district's economy. Nevertheless, Gediz River, whose lower basin crosses Menemen plain to join the sea within the district boundaries still constitutes the lifeline of the region and matters relating to the river's flow as well as its present rate of rather high pollution is a matter of constant debate. The level of education is high in Menemen with literacy rate reaching 99%.

Ramazan Kurşunlu is a Turkish retired footballer who most recently served as manager of Balıkesirspor.

Menemen is a traditional Turkish dish which includes eggs, tomato, green peppers, and spices such as ground black and red pepper cooked in olive oil or sunflower oil. White cheese, and charcuterie products such as sucuk or pastırma may also be added. Menemen may be made with onions, but the addition of onions is often debated and is more common when menemen is eaten as a main dish, rather than at breakfast. The dish is similar to shakshouka. 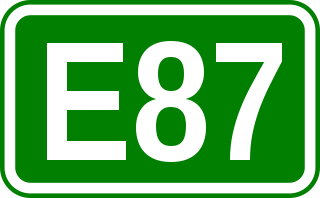 European route E 87 is part of the United Nations international E-road network. It is an important north–south road on the coast of Black Sea, running from Odessa (Ukraine), Tulcea (Romania), Constanţa (Romania), Varna (Bulgaria) south through Burgas (Bulgaria) via Çanakkale to Antalya (Turkey). 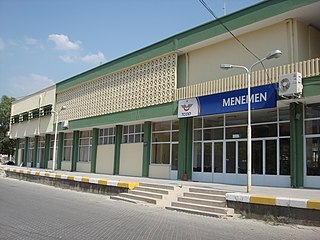 Menemen railway station is a railway station at Menemen in Izmir Province, Turkey. The station is served by the Turkish State Railways, the national rail carrier of Turkey. The station is serviced by six trains daily. Northbound trains go to either Bandırma, Ankara, Afyon or Uşak and southbound trains all go to Alsancak Terminal in İzmir. North of the station, the double track branch line to Aliağa splits from the main line. The original station was built in 1866 by the Smyrna Cassaba Railway.

The İzmir Football League was founded as a regional football league for İzmir based clubs in 1924. In the period from 1924 to 1935, the winners of the İzmir League qualified for the former Turkish Football Championship. In 1937 the first national league in Turkish football was introduced. The top two placed teams of the İzmir League qualified for the National Division, which took place after the conclusion of the regional leagues each season. The name of the league was changed later and became İzmir Professional Football League in the 1955–56 season, when professional football was introduced. 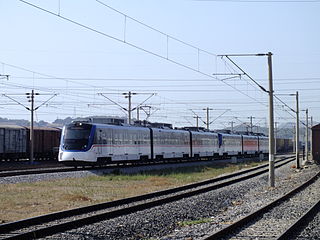 The Northern Line is a commuter rail line operated by IZBAN using tracks owned by the Turkish State Railways. The line runs from north from Alsancak Terminal in Izmir to the town of Aliağa.

Otoyol 33, named the Menemen-Aliağa-Çandarlı Motorway and abbreviated as the O-33 is a 76 km (47 mi) long toll motorway in western Turkey. Beginning at an intersection with İzmir Beltway, the O-33 runs north from Çiğli to Bergama and parallels the D550 for most of its route.

Taşkın Çalış is a Turkish footballer who plays for Menemenspor on loan from Yeni Malatyaspor. He made his Süper Lig debut for Gaziantepspor on 4 January 2012. 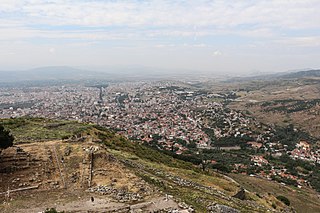 The Battle of Bergama was fought at and near Bergama between the Greek army and forces of the nascent Turkish National Movement during the Greco-Turkish War of 1919–1922. The Turkish forces pushed the Greek army from Bergama on 15 June, but the town was recaptured on 22 June.

Gediz University was a private university located in the Seyrek neighborhood of Menemen, a metropolitan district of Izmir, Turkey. It was established in 2008. On 23 July 2016, in the course of the 2016 Turkish purges, the university was closed by the Turkish government due to its alleged ties with the Gülen movement.

David Nue Domgjonas, commonly known as David Domgjoni is an Albanian professional footballer who plays as a centre-back for Turkish club Menemenspor.

The Menemen Gediz Bridge, also known as the Old Gediz Bridge, officially named the Governor Kâzım Dirik Bridge and historically called the Buruncuk Bridge, is a 156.6 m (514 ft) long bowstring-arch bridge that crosses the Gediz River near Menemen, Turkey. Completed in 1935, the bridge was one of the first five reinforced concrete bridges built by the Republic of Turkey.

Mert Hakan Yandaş is a Turkish professional footballer who plays as a midfielder for the Turkish club Sivasspor in the Süper Lig.

The 2019–20 TFF First League is the 19th season since the league was established in 2001 and 57th season of the second-level football league of Turkey since its establishment in 1963–64. The season began on 16 August 2019 and the regular season will be ended on 2 May 2020. Fixtures for the 2019–20 season were announced on 18 July 2019. On 12 March 2020, The Ministry of Youth and Sports announced matches will be played behind closed doors in the stadiums until the end of April due to the coronavirus pandemic. On 19 March 2020, the league was suspended indefinitely.