Last updated October 10, 2021
Peruvian economist, academic, and politician
In this Spanish name, the first or paternal surname is Aráozand the second or maternal family name is Fernández.

Mercedes Rosalba Aráoz Fernández (born 5 August 1961) is a Peruvian economist, professor, and politician who served as Second Vice President of Peru from 2016 to 2020. At the beginning of her political career, she served as Minister of Foreign Trade and Tourism from 2006 [1] to July 2009, [2] after which she was appointed briefly as Minister of Production, and finally as Minister of Economy and Finance, all portfolios under the second presidency of Alan García. [3]

At the 2016 general election, Aráoz ran for the Second Vice Presidency along Pedro Pablo Kuczynski and Martin Vizcarra in the Peruvians for Change ticket, being ultimately elected in a tight run-off against Keiko Fujimori's Popular Force ticket. Simultaneously, she was elected to Congress for the 2016–2021 term. In the Kuczynski administration, she was appointed Prime Minister, serving from 17 September 2017 to 2 April 2018. Kuczynski resigned on 23 March 2018, following a corruption scandal, thus making Martín Vizcarra the new President of Peru; Araóz subsequently acted as the only Vice President in the Vizcarra administration.

On 30 September 2019, a dispute between Vizcarra and the Congress of the Republic resulted in the dissolution of the Congress by the President, which in turn suspended Vizcarra and named Aráoz as Acting President. [4] [5] However, the suspension of Vizcarra was generally not recognized, [6] forcing Aráoz to decline the claim to the presidency on 1 October 2019. [7] Her resignation was accepted by Congress on 7 May 2020, leaving both Vice Presidencies vacant. [8]

She is Principal Professor of International Economy at the University of the Pacific and member of the Research Center. She is also professor at the Diplomatic Academy of Peru.

She has worked as a consultant with a variety of international organizations including the World Bank, the United Nations Conference on Trade and Development (UNCTAD), the Organization of American States (OAS) and the CAF – Development Bank of Latin America. [11]

Aráoz served as Country Representative for the Inter-American Development Bank (IADB) in Mexico City from 2011 until 2015.

On 28 July 2006, Aráoz was named as Minister of Foreign Trade and Tourism. During her tenure, she fostered free trade negotiations with the European Union, EFTA, China, Canada, Chile, Mexico, and Japan, among others.

On 11 July 2009, Aráoz was named as Minister of Production after leaving the Foreign Trade and Tourism portfolio.

In December 2009, Aráoz was named as Minister of Economy and Finance. [3] She was the first woman in Peruvian history to hold this office.

During her 9 months of managing the Ministry, priority was given to the promotion of infrastructure and public services investment projects; likewise, the concessions of construction projects at national level were reviewed. During her term, the government maintained the growth of the Peruvian economy despite the global financial crisis.

In November 2010, congressman Mauricio Mulder proposed Aráoz for the party's presidential nomination for the 2011 general election. [12] In spite of her resignation as Finance Minister, she was propelled by the government to run for the nomination. [13] She won the majority in at the party's national convention, and accepted the nomination on 28 November 2010. [14] Despite criticism for selecting an independent pro-market liberal as the social democrat party's nominee, her run was viewed by analysts as an intent of propelling the party for future Alan García run in 2016, despite low chances of victory in 2011. As running mates, the party selected former prime minister and congressman Javier Velásquez (1st) and former cabinet minister and congresswoman Nidia Vílchez (2nd).

Throughout the internal process, however, Aráoz held many disagreements with high-ranking party leaders, such as former prime minister Jorge Del Castillo, who was ultimately selected as the head of the congressional list for the Lima constituency. Aráoz heavily criticized the decision of including among the congressional candidates Del Castillo, based on the corruption allegations imputed against him. This event would finally lead to her nomination withdrawal on 16 January 2011. The party would not field any candidate for the election, and Aráoz would retire momentarily from politics. [15]

In the 2016 general election, Aráoz ran with the Peruvians for Change party as candidate both for Congress and for Second Vice President as running mate of Pedro Pablo Kuczynski. She remains an independent within the Party. The ticket was successful and Aráoz was elected Second Vice President [16]

In August 2016, Aráoz was appointed as chair of the APEC Peru 2016 High-Level Commission. The commission was made to determine necessary guidelines, strategies and measures to guarantee Peru's success as host of the meeting. [17]

In August 2017, Aráoz was named as Commissioner for Peru-OECD adherence process.

In September 2017, Aráoz was sworn in as President of the Council of Ministers (Prime Minister). [18] She held the office until April 2018.

The Christian People's Party is a center-right and conservative political party based on the principles of Christian democracy. It was founded in 1966 by a group of Peruvian Christian Democrat Party dissidents, led by Luis Bedoya Reyes.

The Broad Front for Justice, Life and Liberty, or simply Broad Front, is a major political coalition of parties, political organizations, social movements and activist citizens of Peru whose main objective is to consolidate the different leftist, progressive, socialist and communist sectors. 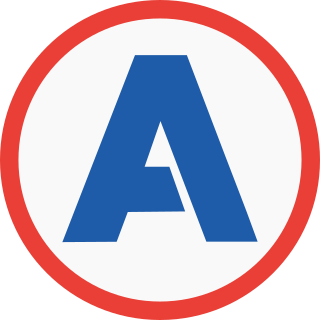 Alliance for Progress is a Peruvian political party founded on December 8, 2001 in Trujillo by Cesar Acuña Peralta. 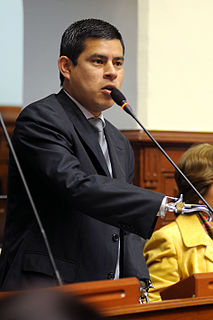 Luis Fernando Galarreta Velarde is a Peruvian Fujimorist politician and a former Congressman representing Lima between 2006 and 2020. He was President of the Congress for the 2017–2018 annual term. Galarreta was part of the presidential ticket of Keiko Fujimori in the 2021 elections that lost the elections to the Pedro Castillo ticket, however, he was elected to the Andean Parliament. 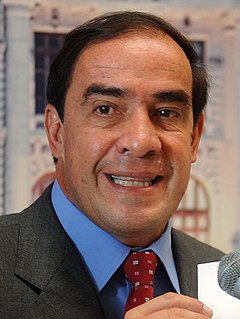 General elections were held in Peru on 10 April 2016 to determine the president, vice-presidents, composition of the Congress of the Republic of Peru and the Peruvian representatives of the Andean Parliament.

Peruvians for Change was a centre-right party in Peru. 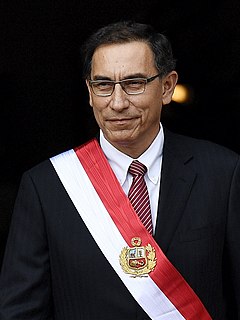 Martín Alberto Vizcarra Cornejo is a Peruvian engineer and politician who served as President of Peru from 2018 to 2020. Vizcarra previously served as Governor of the Department of Moquegua (2011–2014), First Vice President of Peru (2016–2018), Minister of Transport and Communications of Peru (2016–2017), and Ambassador of Peru to Canada (2017–2018), with the latter three during the presidency of Pedro Pablo Kuczynski. The Peruvian Congress voted to impeach Martin Vizcarra in November 2020, removing him from the presidency.

The presidency of Pedro Pablo Kuczynski in Peru began with his inauguration on Peru independence day and ended with the president's resignation following a corruption scandal on 23 March 2018. 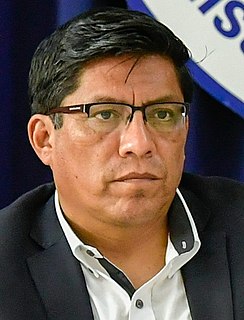 Vicente Antonio Zeballos Salinas is a Peruvian politician who served as Prime Minister of Peru from September 2019 to July 2020, under President Martín Vizcarra's administration. Prior, he served as Minister of Justice and Human Rights. He is considered a strong representative from the southern part of the country.

The 2019–2020 Peruvian constitutional crisis began when President Martín Vizcarra dissolved the Congress of Peru on 30 September 2019 considering a de facto denial of the vote of confidence. Congress responded by declaring Vizcarra's presidency suspended and appointed Vice President Mercedes Aráoz as interim president, moves that were largely seen as null and void. 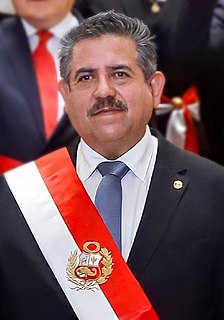 María Soledad Pérez Tello de Rodríguez is a Peruvian lawyer, notary and politician. A prominent member of the Christian People's Party, she currently serves as its Secretary General since December 2017.

Saleh Carlos Salvador Heresi Chicoma is a Peruvian lawyer and politician. Throughout his political career, he served as mayor of San Miguel from 2003 to 2014, member of the Peruvian Congress from 2016 to 2020, and Minister of Justice and Human Rights at the start of Martín Vizcarra administration, in 2018.

Sergio Iván Atarama Martínez is a Peruvian lawyer and politician. A founding member of the Peruvians for Change party, he served as Deputy Minister of Justice at the start of the Martín Vizcarra administration, under the ministry headed by Salvador Heresi.

The impeachment process against Martín Vizcarra began in the Congress of Peru on 11 September 2020 when congress initiated proceedings against Vizcarra on grounds of "moral incapacity", accusing him of influence peddling after audio recordings were released by an opposition legislator alleging that Vizcarra's political decisions were swayed by an obscure singer.

The removal of Martín Vizcarra, President of Peru, was initiated by the Congress of Peru on 8 October 2020 under the grounds of "permanent moral incapacity". On 20 October 2020, political factions Union for Peru, Podemos Peru, and Frente Amplio co-signed a series of articles of impeachment against President Vizcarra for alleged cases of corruption during his term as the governor of Moquegua. Vizcarra was removed from office on 9 November 2020 in a 105–16 vote. 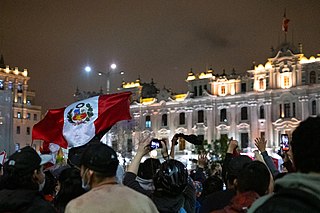 The 2020 Peruvian protests were a series of demonstrations sparked after the removal of President Martín Vizcarra, beginning on 9 November 2020. 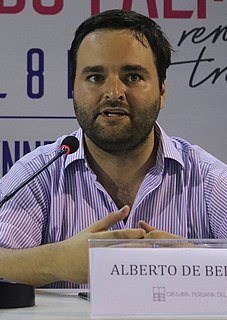 Alberto de Belaúnde de Cárdenas is a Peruvian lawyer, LGBT activist, and politician. An independent progressive caucusing with the Purple Party, he currently serves in the Peruvian Congress' complementary term 2020-2021. He previously served in the 2016-2019 term, elected under Peruvians for Change, and subsequently joining the progressive Liberal Bench.