In the mathematical field of complex analysis, a meromorphic function on an open subset D of the complex plane is a function that is holomorphic on all of Dexcept for a set of isolated points, which are poles of the function. [1] The term comes from the Ancient Greek meros (μέρος), meaning "part". [lower-alpha 1]

Intuitively, a meromorphic function is a ratio of two well-behaved (holomorphic) functions. Such a function will still be well-behaved, except possibly at the points where the denominator of the fraction is zero. If the denominator has a zero at z and the numerator does not, then the value of the function will approach infinity; if both parts have a zero at z, then one must compare the multiplicity of these zeros.

From an algebraic point of view, if the function's domain is connected, then the set of meromorphic functions is the field of fractions of the integral domain of the set of holomorphic functions. This is analogous to the relationship between the rational numbers and the integers.

Both the field of study wherein the term is used and the precise meaning of the term changed in the 20th century. In the 1930s, in group theory, a meromorphic function (or meromorph) was a function from a group G into itself that preserved the product on the group. The image of this function was called an automorphism of G. [2] Similarly, a homomorphic function (or homomorph) was a function between groups that preserved the product, while a homomorphism was the image of a homomorph. This form of the term is now obsolete, and the related term meromorph is no longer used in group theory. The term endomorphism is now used for the function itself, with no special name given to the image of the function.

A meromorphic function is not necessarily an endomorphism, since the complex points at its poles are not in its domain, but may be in its range.

Since the poles of a meromorphic function are isolated, there are at most countably many. [3] The set of poles can be infinite, as exemplified by the function

By using analytic continuation to eliminate removable singularities, meromorphic functions can be added, subtracted, multiplied, and the quotient

can be formed unless

on a connected component of D. Thus, if D is connected, the meromorphic functions form a field, in fact a field extension of the complex numbers.

Unlike in dimension one, in higher dimensions there do exist compact complex manifolds on which there are no non-constant meromorphic functions, for example, most complex tori.

On a Riemann surface, every point admits an open neighborhood which is biholomorphic to an open subset of the complex plane. Thereby the notion of a meromorphic function can be defined for every Riemann surface.

For every Riemann surface, a meromorphic function is the same as a holomorphic function that maps to the Riemann sphere and which is not constant ∞. The poles correspond to those complex numbers which are mapped to ∞. 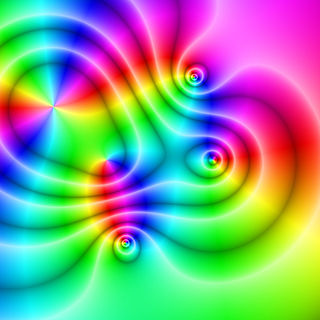 Complex analysis, traditionally known as the theory of functions of a complex variable, is the branch of mathematical analysis that investigates functions of complex numbers. It is helpful in many branches of mathematics, including algebraic geometry, number theory, analytic combinatorics, applied mathematics; as well as in physics, including the branches of hydrodynamics, thermodynamics, and particularly quantum mechanics. By extension, use of complex analysis also has applications in engineering fields such as nuclear, aerospace, mechanical and electrical engineering.

In complex analysis, a removable singularity of a holomorphic function is a point at which the function is undefined, but it is possible to redefine the function at that point in such a way that the resulting function is regular in a neighbourhood of that point. 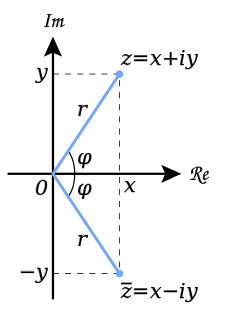 In mathematics, a rational function is any function that can be defined by a rational fraction, which is an algebraic fraction such that both the numerator and the denominator are polynomials. The coefficients of the polynomials need not be rational numbers; they may be taken in any field K. In this case, one speaks of a rational function and a rational fraction over K. The values of the variables may be taken in any field L containing K. Then the domain of the function is the set of the values of the variables for which the denominator is not zero, and the codomain is L.

In the mathematical field of complex analysis, Nevanlinna theory is part of the theory of meromorphic functions. It was devised in 1925, by Rolf Nevanlinna. Hermann Weyl called it "one of the few great mathematical events of century." The theory describes the asymptotic distribution of solutions of the equation f(z) = a, as a varies. A fundamental tool is the Nevanlinna characteristic T(r, f) which measures the rate of growth of a meromorphic function.

In algebraic geometry, divisors are a generalization of codimension-1 subvarieties of algebraic varieties. Two different generalizations are in common use, Cartier divisors and Weil divisors. Both are ultimately derived from the notion of divisibility in the integers and algebraic number fields. 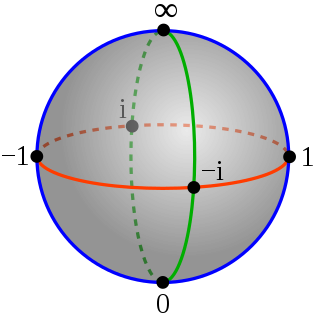