Merry-Joseph Blondel (25 July 1781 – 12 June 1853) was a French history painter of the Neoclassical school. He was a winner of the prestigious Prix de Rome in 1803. After the salon of 1824, he was bestowed with the rank of Knight in the order of the Legion d'Honneur by Charles X of France and offered a professorship at the École nationale supérieure des Beaux-Arts: a position in which he remained until his death in 1853. In 1832, he was elected to a seat at the Académie des Beaux-Arts in Paris. [1]

Blondel was a student of the Neoclassical master Baron Jean-Baptiste Regnault and from 1809, a lifelong friend of the painter Ingres. [2]

For much of Blondel's painting career, he was occupied with public commissions for paintings and frescoes in important buildings, including palaces, museums and churches. Blondel completed major commissions for the Palace of Fontainebleau, the Palace of Versailles, the Louvre Museum, the Brongniart Palace (also known as the Bourse de Paris), the Luxembourg Palace, and the churches of St.Thomas Aquinas and Notre-Dame-de-Lorette.

Blondel's 1814 painting La Circassienne au Bain became infamous during the early part of the 20th century for being the subject of the largest claim for financial compensation made against the White Star Line, for a single item of luggage lost by a passenger on the RMS Titanic. [3]

Merry-Joseph was born on 25 July 1781 to Joseph-Armand Blondel (1740-1805), a painter and expert in stucco decoration, and his second wife Marie-Geneviève Marchand (died 1819). Merry-Joseph had two brothers and a sister, including Charles-Francois Armand Blondel, an architect. Several generations of the Blondel family had become associated with architecture and the design and decoration of buildings. Blondel's great uncle, Jacques-Francois Blondel (1705-1774) wrote a treatise on the subject and opened the first dedicated school of architecture in Paris. [4]

At the age of fourteen, on the advice of his maternal uncle, Merry-Joseph went to work in the office of a Notary, an experience which he would later describe as "excruciating". [5] After two years of complaining to his father, in 1797, a place was secured for him as an apprentice at the Dihl and Guerhard porcelain factory, where young apprentices received figure drawing lessons from the celebrated Charles-Etienne Leguay for five out of every ten working days. By 1801, however, demand for Dihl and Guerhard porcelain had increased so much that the drawing department was eliminated and apprentices were expected to focus on decorative techniques more suited to the demands of mass-production, directly on the factory floor. [6]

In 1801, once again, Blondel convinced his father to break his apprenticeship contract as his drawing talent secured him a place in the studio of Baron Jean-Baptiste Regnault. Within a year, Blondel had acquired the nickname Monsieur Cinq-Prix (Mr Five-prizes) among his peers at the studio, on account of the number of medals and prizes he had won for his drawing. [7] Another year on and Blondel's entry to the 1803 salon, a painting depicting Aeneas rescuing his father from the burning city of Troy, won him the Grand Prix de Rome. However, due to a change in the system and the temporary suspension of scholarships, no students were sent to the French Academy in Rome that year and Blondel would have to wait until 1809 before he could take his place at the Villa Medici. [8]

On arrival at the Villa Medici in Rome in 1809, Blondel struck up a friendship with fellow student Jean Auguste Dominique Ingres which, as correspondence between the two artists demonstrated, lasted for the rest of their lives. In 1835, Ingres returned as the director of the French Academy in Rome and Blondel appeared to be the favourite to succeed him in 1840. Together with his second wife, Louise Emilie Delafontaine, Blondel stayed at the Villa Medici as a guest of Ingres for four months in 1839, during which time the three of them undertook a lengthy sketching tour of the Marches and Umbria. When Blondel was unexpectedly overlooked for the position of director of the Academy in 1840, Ingres sent him a "lengthy and heartfelt" letter of condolence. [9]

After three years in Rome, Blondel returned to Paris and became a regular exhibitor at the Louvre salon exhibitions. At the salon of 1817, Blondel won a gold medal for his painting depicting the Death of Louis XII. After the salon of 1824, the rank of Chevalier (Knight) in the order of the Legion d'Honneur, was bestowed upon both Blondel and Ingres by the French King, Charles X.

In 1824, the year of his knighthood, Blondel was awarded a professorship at the École nationale supérieure des Beaux-Arts, a position which he occupied until his death in 1853. In that same year, Blondel also competed for a vacant seat at the Académie des beaux-arts but lost out to Ingres. He was eventually elected to a seat at the Académie in 1832. [10]

By the mid 1820s, his many notable achievements had firmly established Blondel as a history painter of great renown and he was accordingly rewarded with many public commissions for paintings and frescoes in important buildings, including museums, palaces and churches. Most notable among these commissions were:

Blondel was working on his fresco cycle at the church of St. Thomas Aquinas, in the 7e arronsissement when he fell ill and died in 1853. [11]

Blondel's entry for the salon exhibition in November 1814 was a full sized figure painting, in oil on canvas, depicting a standing female figure, bathing in an idealised setting from classical antiquity. In typically simplistic fashion, the exhibition catalogue described the painting as painting no.108, Une Baigneuse (a bather). Critical references to the painting would later confirm Blondel's given title for the picture as La Circassienne au Bain. [12]

Loss on the RMS Titanic

In January 1913, a claim was filed in New York against the White Star Line, by RMS Titanic survivor Mauritz Håkan Björnström-Steffansson, for financial compensation resulting from the loss of the painting. The amount of the claim was $100,000 ($2.4 million equivalent in 2014); a valuation which reflected Blondel's significant artistic status at that time and making it by far the most highly valued single item of luggage or cargo lost as a result of the sinking. [13] 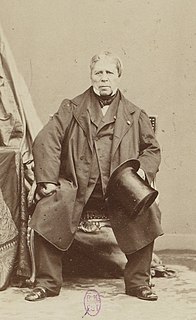 Théodore Chassériau was a Dominican-born French Romantic painter noted for his portraits, historical and religious paintings, allegorical murals, and Orientalist images inspired by his travels to Algeria. Early in his career he painted in a Neoclassical style close to that of his teacher Jean-Auguste-Dominique Ingres, but in his later works he was strongly influenced by the Romantic style of Eugène Delacroix. He was a prolific draftsman, and made a suite of prints to illustrate Shakespeare's Othello. 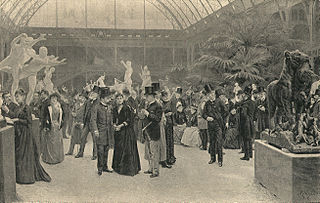 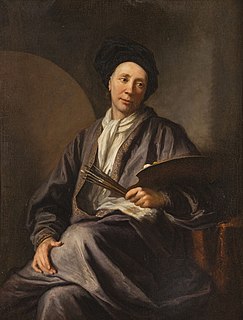 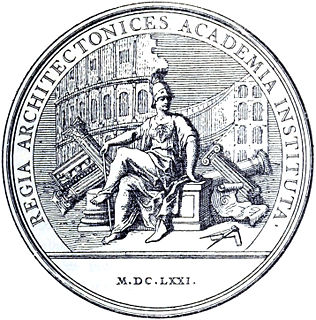 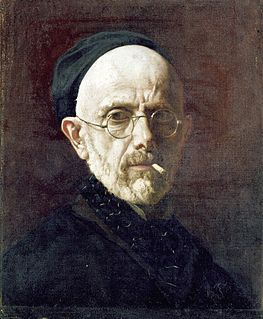 Henri Lehmann was a German-born French historical painter and portraitist. 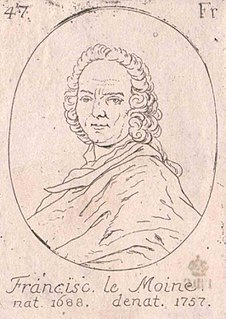 Émile Signol was a French artist who painted history paintings, portraits, and genre works. Although he lived during the Romantic period, he espoused an austere neoclassicism and was hostile to Romanticism. 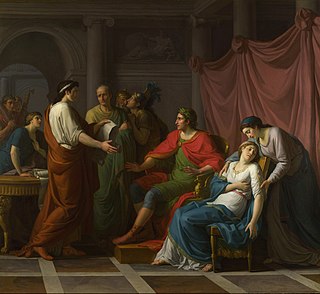 Jean-Joseph Taillasson was a French history painter and portraitist, draftsman, and art critic.

The Napoleon III style, also known as the Second Empire style, was a highly eclectic style of architecture and decorative arts, which used elements of many different historical styles, and also made innovative use of modern materials, such as iron frameworks and glass skylights. It flourished during the reign of Emperor Napoleon III in France (1852–1871) and had an important influence on architecture and decoration in the rest of Europe and the United States. Major examples of the style include the Opéra Garnier (1862–1871) in Paris by Charles Garnier, the Bibliothèque nationale de France, and the Church of Saint Augustine (1860–1871). The architectural style was closely connected with Haussmann's renovation of Paris carried out during the Second Empire; the new buildings, such as the Opéra, were intended as the focal points of the new boulevards. 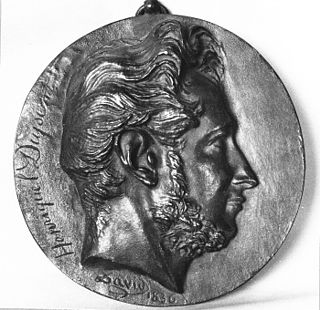 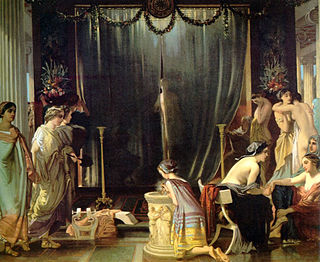 Victor-Louis Mottez was a French fresco painter, painter and portraitist.

Gioacchino Giuseppe Serangeli was a Roman painter, a pupil of Jacques-Louis David, who painted in France during the period of the French Revolution and the subsequent First French Empire. For some time he was one of the more fashionable painters of portraits of the new ruling class in France. His more mature paintings, done after his return to Italy, were also well regarded. 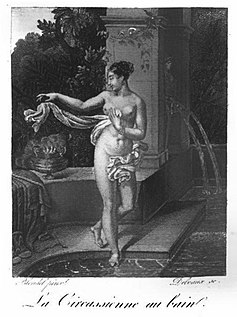 La Circassienne au Bain, also known as Une Baigneuse, was a large Neoclassical oil painting from 1814 by Merry-Joseph Blondel depicting a life-sized young Circassian woman bathing in an idealized setting from classical antiquity. The painting was destroyed with the sinking of the RMS Titanic in 1912. When financial compensation claims were filed with US commissioner Gilchrist in January 1913, the painting gained notoriety as the subject of the largest claim made against the White Star Line for the loss of a single item of baggage or cargo. 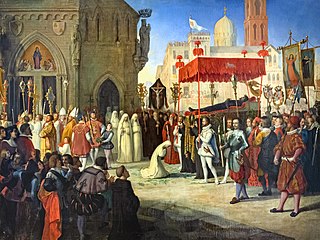 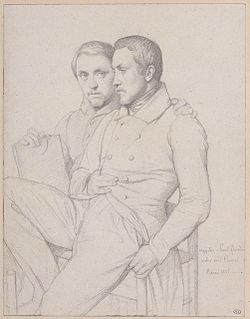