Last updated December 27, 2022
American economist
Not to be confused with Merton L. Miller.

Merton Howard Miller (May 16, 1923 – June 3, 2000) was an American economist, and the co-author of the Modigliani–Miller theorem (1958), which proposed the irrelevance of debt-equity structure. He shared the Nobel Memorial Prize in Economic Sciences in 1990, along with Harry Markowitz and William F. Sharpe. Miller spent most of his academic career at the University of Chicago's Booth School of Business.

Miller was born in Boston, Massachusetts to Jewish parents Sylvia and Joel Miller, [1] [2] a housewife and attorney. He attended Harvard University as an undergraduate student. He worked during World War II as an economist in the division of tax research of the Treasury Department, and received a Ph.D. in economics from Johns Hopkins University, 1952. His first academic appointment after receiving his doctorate was Visiting Assistant Lecturer at the London School of Economics.

In 1958, at Carnegie Institute of Technology (now Carnegie Mellon University), he collaborated with his colleague Franco Modigliani on the paper The Cost of Capital, Corporate Finance and the Theory of Investment. This paper urged a fundamental objection to the traditional view of corporate finance, according to which a corporation can reduce its cost of capital by finding the right debt-to-equity ratio. According to the Modigliani–Miller theorem, on the other hand, there is no right ratio, so corporate managers should seek to minimize tax liability and maximize corporate net wealth, letting the debt ratio chips fall where they will.

The way in which they arrived at this conclusion made use of the "no arbitrage" argument, i.e. the premise that any state of affairs that will allow traders of any market instrument to create a riskless money machine will almost immediately disappear. They set the pattern for many arguments based on that premise in subsequent years.

Miller wrote or co-authored eight books. He became a fellow of the Econometric Society in 1975 and was president of the American Finance Association in 1976. He was on the faculty of the University of Chicago's Booth School of Business from 1961 until his retirement in 1993, although he continued teaching at the school for several more years.

His works formed the basis of the "Modigliani-Miller Financial Theory".

He served as a public director on the Chicago Board of Trade 1983–85 and the Chicago Mercantile Exchange from 1990 until his death in Chicago on June 3, 2000. In 1993, Miller waded into the controversy surrounding $2 billion in trading losses by what was characterized as a rogue futures trader at a subsidiary of Metallgesellschaft, arguing in the Wall Street Journal that management of the subsidiary was to blame for panicking and liquidating the position too early. [3] In 1995, Miller was engaged by Nasdaq to rebut allegations of price fixing. [4] 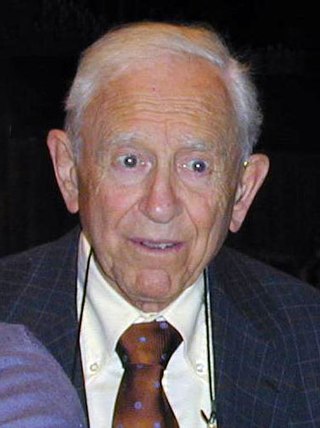 The Modigliani–Miller theorem is an influential element of economic theory; it forms the basis for modern thinking on capital structure. The basic theorem states that in the absence of taxes, bankruptcy costs, agency costs, and asymmetric information, and in an efficient market, the enterprise value of a firm is unaffected by how that firm is financed. This is not to be confused with the value of the equity of the firm. Since the value of the firm depends neither on its dividend policy nor its decision to raise capital by issuing shares or selling debt, the Modigliani–Miller theorem is often called the capital structure irrelevance principle.

In corporate finance, capital structure refers to the mix of various forms of external funds, known as capital, used to finance a business. It consists of shareholders' equity, debt, and preferred stock, and is detailed in the company's balance sheet. The larger the debt component is in relation to the other sources of capital, the greater financial leverage the firm is said to have. Too much debt can increase the risk of the company and reduce its financial flexibility, which at some point creates concern among investors and results in a greater cost of capital. Company management is responsible for establishing a capital structure for the corporation that makes optimal use of financial leverage and holds the cost of capital as low as possible.

Stephen Alan "Steve" Ross was the inaugural Franco Modigliani Professor of Financial Economics at the MIT Sloan School of Management after a long career as the Sterling Professor of Economics and Finance at the Yale School of Management. He is known for initiating several important theories and models in financial economics. He was a widely published author in finance and economics, and was a coauthor of a best-selling Corporate Finance textbook.

John Burr Williams was an American economist, recognized as an important figure in the field of fundamental analysis, and for his analysis of stock prices as reflecting their "intrinsic value".

The Carnegie School is a school of economic thought originally formed at the Graduate School of Industrial Administration (GSIA), the current Tepper School of Business, of Carnegie Institute of Technology, the current Carnegie Mellon University, especially during the 1950s to 1970s. GSIA is known for formulating two "seemingly incompatible" concepts: bounded rationality and rational expectations. The former was developed by Herbert A. Simon, along with James March, Richard Cyert and Oliver Williamson. The latter was developed by John F. Muth and later popularized by Robert Lucas Jr., Thomas Sargent, Leonard Rapping, and others. Along with other, mostly Midwestern universities, the rational expectations branch is considered part of freshwater economics, while the bounded rationality branch has been credited with originating behavioral economics and economics of organization. Depending on context, the term "Carnegie School" can refer to either both branches or only the bounded rationality branch, sometimes with the qualifier "Carnegie School of organization theory". The commonality between both branches is the use of dynamic optimization and forecasting techniques derived from production theory, and the early use of computers to solve planning and optimization problems.

Xavier Gabaix is a French economist, currently the Pershing Square Professor of Economics and Finance at Harvard University. He has been listed among the top 8 young economists in the world by The Economist. He holds a B.A. in Mathematics from the Ecole Normale Supérieure, as well as a Ph.D. in Economics from Harvard University.

Quantitative analysis is the use of mathematical and statistical methods in finance and investment management. Those working in the field are quantitative analysts (quants). Quants tend to specialize in specific areas which may include derivative structuring or pricing, risk management, investment management and other related finance occupations. The occupation is similar to those in industrial mathematics in other industries. The process usually consists of searching vast databases for patterns, such as correlations among liquid assets or price-movement patterns.

The term shareholder yield captures the three ways in which the management of a public company can distribute cash to shareholders: cash dividends, stock repurchases and debt reduction.

Wikiquote has quotations related to Merton Miller .
This page is based on this Wikipedia article
Text is available under the CC BY-SA 4.0 license; additional terms may apply.
Images, videos and audio are available under their respective licenses.