Mesopotamia was the name of two distinct Roman provinces, the one a short-lived creation of the Roman Emperor Trajan in 116–117 and the other established by Emperor Septimius Severus in ca. 198, which ranged between the Roman and the Sassanid empires, until the Muslim conquests of the 7th century.

In 113, Emperor Trajan (r. 98–117) launched a war against Rome's long-time eastern rival, the Parthian Empire. In 114, he conquered Armenia, which was made into a province, and by the end of 115, he had conquered northern Mesopotamia. This too was organized as a province in early 116, when coins were minted to celebrate the fact. [1]

Later in the same year, Trajan marched into central and southern Mesopotamia (enlarging and completing the province of Mesopotamia) and across the river Tigris to Adiabene, which he annexed into another Roman province, Assyria. [2] But he did not stop there. In the last months of 116, he captured the great Persian city of Susa. He deposed the Parthian king Osroes I and put his own puppet ruler Parthamaspates on the Parthian throne. Never again would the Roman Empire advance so far to the east.

As soon as Trajan died, however, his successor Hadrian (r. 117–138) relinquished his conquests east of the Euphrates river, which became again the Roman Empire's eastern boundary. [3] [4]

Northern Mesopotamia, including Osroene, came again under Roman control in the expedition of Lucius Verus in 161–166, but were not formally organized into provinces; instead, they were left under local vassal rulers, although Roman garrisons were maintained, notably at Nisibis.

Year Of The Five Emperors

This control was threatened in 195, during the civil war between Septimius Severus (r. 193–211) and the usurper Pescennius Niger, when rebellions broke out in the area, and Nisibis was besieged. Severus quickly restored order and organized Osroene as a full province. [5] [6]

Next Severus embarked on a war against Parthia, which he concluded successfully with the sack of the Parthian capital Ctesiphon. In emulation of Trajan, he re-established a province of Mesopotamia in 198, with Nisibis, elevated to the status of a full colonia , as its capital. [7] [8]

For the remainder of its existence, the new province would remain a bone of contention between the Romans and their eastern neighbors, suffering heavily in the recurrent Roman–Persian Wars. In the turmoil that followed the Year of the Six Emperors, in 239–243, Ardashir I (r. 224–241), the founder of the new Sassanid Empire which replaced the moribund Parthians, attacked and overran the area, but it was recovered by Timesitheus before his death in 243. [10] In the 250s, the Persian shah Shapur I (r. ca. 240–270) attacked Mesopotamia, and fought with the Roman emperor Valerian (r. 253–260), whom he captured at Edessa in 260. [11] In the next year, however, Shapur was heavily defeated by Odaenathus of Palmyra and driven out of Mesopotamia. [12]

Under the reforms of Diocletian (r. 284–305) and Constantine I (r. 306–337), it became part of the Diocese of the East, which in turn was subordinated to the praetorian prefecture of the East.

Nisibis and Singara, along with the territory in Adiabene conquered by Diocletian were lost after the debacle of Julian's Persian expedition in 363, and the capital was transferred to Amida, while the seat of the military commander, the dux Mesopotamiae, was located at Constantina. Other cities included Martyropolis and Kephas. [9]

After the troubles Roman forces faced in the Anastasian War of 502–506, the East Roman emperor Anastasius I (r. 491–518) built the fortress of Dara as a counter to Nisibis and as the new base of the dux Mesopotamiae.

During the reforms of Justinian I (r. 527–565), the province was split up: the northern districts with Martyropolis went to the new province of Armenia IV, while the remainder was divided into two civil and ecclesiastical districts, one (the region south of the Tigris) with capital at Amida and the other (the region of Tur Abdin) with capital at Dara. [9] The province suffered greatly during the near-constant wars with Persia in the 6th century. In 573, the Persians even took Dara, although the East Romans recovered it under the peace of 591. They lost it again to the Persians in the great war of 602–628, and regained it afterwards only to lose the entire region permanently to the Muslim conquests in 633–640. [9]

Osroene, also spelled Osroëne and Osrhoene and sometimes known by the name of its capital city, Edessa, was a historical kingdom in Upper Mesopotamia, which was ruled by the Abgarid dynasty of Arab origin. Generally allied with the Parthians, the Kingdom of Osroene enjoyed semi-autonomy to complete independence from the years of 132 BC to AD 214. Though ruled by a dynasty of Arab origin, the kingdom's population was mainly Aramean with a Greek and Parthian admixture. In addition, though Arab cults were attested at Edessa, the city's cultural setting was fundamentally Aramaic alongside strong Parthian influences.

Aššur, also known as Ashur and Qal'at Sherqat, was the capital of the Old Assyrian Empire, the Middle Assyrian Empire, and for a time, of the Neo-Assyrian Empire. The remains of the city lie on the western bank of the Tigris River, north of the confluence with its tributary, the Little Zab, in what is now Iraq, more precisely in the al-Shirqat District of the Saladin Governorate.

Adiabene was an ancient kingdom in Assyria, with its capital at Arbela.

The Kitos War was one of the major Jewish–Roman wars, 66–136. The rebellions erupted in the year 115, when a majority of the Roman armies were fighting Trajan's Parthian War on the eastern border of the Roman Empire. Major uprisings by ethnic Judeans in Cyrenaica, Cyprus and Egypt spiraled out of control, resulting in a widespread slaughter of left-behind Roman garrisons and Roman citizens by Jewish rebels.

The Roman–Persian Wars, also known as the Roman–Iranian Wars, were a series of conflicts between states of the Greco-Roman world and two successive Iranian empires: the Parthian and the Sasanian. Battles between the Parthian Empire and the Roman Republic began in 54 BC; wars began under the late Republic, and continued through the Roman and Sasanian empires. Various vassal kingdoms and allied nomadic nations in the form of buffer states and proxies also played a role. The wars were ended by the Arab Muslim Conquests, which led to the fall of the Sasanian Empire and huge territorial losses for the Byzantine Empire, shortly after the end of the last war between them.

Assyria was reputedly a Roman province that lasted only two years. 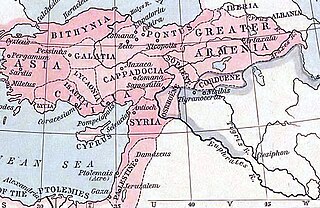 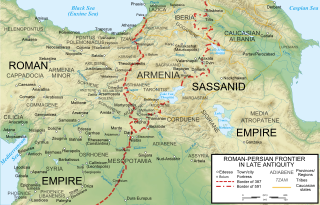 The Byzantine–Sasanian wars, also known as the Irano-Byzantine wars refers to a series of conflicts between the Eastern Roman (Byzantine) Empire and the Sassanian Empire of Persia. A continuation of the Roman–Persian Wars, the conflict involved several smaller campaigns and peace treaties lasting for years at a time.

The Byzantine–Sasanian War of 572–591 was a war fought between the Sasanian Empire of Persia and the Eastern Roman Empire, termed by modern historians as the Byzantine Empire. It was triggered by pro-Byzantine revolts in areas of the Caucasus under Persian hegemony, although other events contributed to its outbreak. The fighting was largely confined to the southern Caucasus and Mesopotamia, although it also extended into eastern Anatolia, Syria, and northern Iran. It was part of an intense sequence of wars between these two empires which occupied the majority of the 6th and early 7th centuries. It was also the last of the many wars between them to follow a pattern in which fighting was largely confined to frontier provinces and neither side achieved any lasting occupation of enemy territory beyond this border zone. It preceded a much more wide-ranging and dramatic final conflict in the early 7th century. 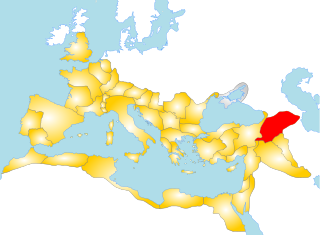 Roman Armenia refers to the rule of parts of Greater Armenia by the Roman Empire, from the 1st century AD to the end of Late Antiquity. While Armenia Minor had become a client state and incorporated into the Roman Empire proper during the 1st century AD, Greater Armenia remained an independent kingdom under the Arsacid dynasty. Throughout this period, Armenia remained a bone of contention between Rome and the Parthian Empire, as well as the Sasanian Empire that succeeded the latter, and the casus belli for several of the Roman–Persian Wars. Only in 114–118 was Emperor Trajan able to conquer and incorporate it as a short-lived province.

The Anastasian War was fought from 502 to 506 between the Byzantine Empire and the Sasanian Empire. It was the first major conflict between the two powers since 440, and would be the prelude to a long series of destructive conflicts between the two empires over the next century.

Romans in Persia is related to the brief invasion and occupation of western and central areas of Parthia by the Romans during their empire. Emperor Trajan was even temporarily able to nominate a king of western parts of Parthia, Parthamaspates, as ruler of a Roman "client state" in Parthia.

Parthamasiris, also known as Partamasir or Parthomasiris was a Parthian Prince who served as a Roman Client King of Armenia. 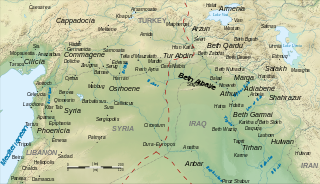 Arbāyistān was a Sasanian province in Late Antiquity. Due to its situation and its road systems, the province was a source of income from commercial traffic, as well as a constant area of contention during the Roman-Persian wars. 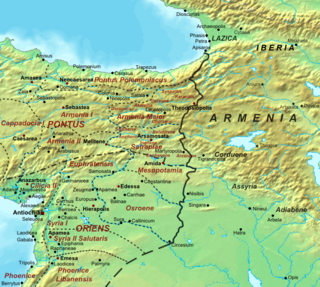 Osroene, also spelled Osrohene and Osrhoene, was a Roman province which existed for nearly 400 years. It was formed after the absorption of the Kingdom of Osroene in 244 CE and served as a frontier province against the Sassanid empire until the Muslim conquests of the 7th century.

Trajan's Parthian campaign, also known as Trajan's Parthian War, was engaged by Roman emperor Trajan in the year 115 against the Parthian Empire in Mesopotamia. The war was initially successful for the Romans, but due to a series of setbacks, including wide-scale rebellions in the Eastern Mediterranean and North Africa, as well as Trajan's death in 117, ended in a Roman withdrawal.

The Perso-Roman wars of 337–361 were a series of military conflicts fought between the Roman Empire and the Sasanid Empire between 337 and 361. They were a result of long-standing aggression between the rival powers over influence in the border kingdoms of Armenia and Iberia, as well as the desire of Shapur II, after his Arab campaign, to revoke the unfavorable terms of the Treaty of Nisibis, which had concluded the previous war between the empires. Though the Romans under Constantius II were defeated in several sanguinary encounters, Shapur was unable to secure a decisive victory.