The metropolitan counties are Greater Manchester, Merseyside, South Yorkshire, Tyne and Wear, West Midlands and West Yorkshire. The counties typically have populations of 1.2 to 2.8 million. [1]

The county councils of these were abolished in 1986, but the counties themselves still exist legally. [2] They are used for some administrative and geographic purposes, and are still ceremonial counties. Most of the powers that the former county councils had were devolved to their metropolitan boroughs, which are now in effect unitary authorities; however, some functions (such as emergency services, civil defence and public transport) are still run jointly on a metropolitan-county-wide basis. [3]

There are 27 such counties:

All have county councils. This definition of "shire county" excludes Berkshire because it has no county council. The counties are less urbanised and have populations of 109,000 to 1.4 million. [1] Under local government reforms coming into effect in 2009, the number of such counties was reduced. The non-metropolitan counties of Bedfordshire and Cheshire were each split into two separate non-metropolitan counties, while Cornwall, County Durham, Northumberland, Shropshire and Wiltshire became unitary authorities.

Unitary authorities are areas with only one council, and there are 56 in total.

The Local Government Act 1972 created the system of metropolitan and non-metropolitan counties and districts, but specifically excluded two parts of England from the new system, a situation which exists to the present.

Greater London was created in 1965 by the London Government Act 1963 as a sui generis administrative area, [4] with the Greater London Council functioning as an upper-tier local government. It consists of 33 local authority districts and spans the area which was prior made up of the County of London, most of Middlesex, and parts of other neighbouring administrative counties. In 1972, no metropolitan or non-metropolitan counties or districts were created in this area. However, the council was abolished along with the metropolitan county councils in 1986.

In 1994, Greater London was designated as one of nine regions of England, each of which had a government office up until they were abolished 2011. Since 2000, Greater London has had an elected Assembly and Mayor responsible for strategic local government. In the other eight regions, plans for elected assemblies were abandoned (although they had regional chambers with limited functions between 1999 and 2010), leaving London as the only region with a conterminous authority.

The area does however include two counties for the purposes of lieutenancies: the county of Greater London (which covers the 32 London boroughs) and the City of London.

The Isles of Scilly are, like Greater London, not covered by the system of metropolitan and non-metropolitan counties. The Council of the Isles of Scilly remains a district council (constituted in 1890, by way of the Local Government Act 1888) with county council powers (granted by the Isles of Scilly Order 1930) and is therefore a sui generis unitary authority. Some functions, such as health and economic development, are shared with Cornwall Council, and the islands form part of the ceremonial county of Cornwall.

The current system of metropolitan and non-metropolitan counties came into effect on 1 April 1974 and replaced the administrative counties and county boroughs, which were abolished at that time. Greater London was created in 1965 under separate legislation.

By the late 1960s, it had become obvious that the structure of local government in England and Wales needed reforming. Harold Wilson's Labour government set up the Redcliffe-Maud Commission to produce proposals for wholesale reform.

The report proposed that for most of England the two-tier structure be abolished, and replaced with a system of 58 unitary authorities, which would generally ignore the previous administrative boundaries in favour of changes that made geographic sense - a total redrawing of the map. In the South of Lancashire, North East of Cheshire and the Birmingham area, there would be 3 metropolitan areas, with 20 district authorities.

These proposals were opposed by the Conservative Party opposition led by Edward Heath. They won the 1970 general election, and set to work defining their own scheme. This scrapped the concept of unitary authorities (even for existing county boroughs) – the entire area of England and Wales was to be divided into uniform counties and districts. In England the new divisions were to be largely modelled on the existing counties with quite radical reforms put forward, even in some non-metropolitan areas.

Despite reassurances from the government that nobody's loyalties were expected to change as a result of the local government reform, many changes did incur significant local opposition. Most of the radical changes were withdrawn. One aspect the government stood firm on was the mergers of small counties. Campaigns for the continuation of Rutland and Herefordshire were unsuccessful, although due to its special geographic circumstances, the Isle of Wight was permitted to retain a separate county council, as opposed to being reunified with its historic county of Hampshire.

The metropolitan counties were composed as follows:

Other significant changes were:

The changes were adopted by the Royal Mail for the purposes of postal addresses wherever they were able, with the notable exceptions of Hereford and Worcester and Greater Manchester. Humberside was divided for this purpose into North Humberside and South Humberside.

In 1986, the county councils of the metropolitan counties and the Greater London Council were abolished by Margaret Thatcher's government following disputes with central government, but the counties themselves remained legally in existence.

The 1990s led to the restoration of county boroughs under a new name, unitary authorities, which radically changed the administrative map of England. The changes were carried out in several waves.

On 1 April 1995, the Isle of Wight became a single unitary authority. It had previously had a two-tier structure with an Isle of Wight County Council, Medina Borough Council and South Wight Borough Council. Also on this day, two small areas were ceded from Surrey and Buckinghamshire to Berkshire, giving it a border with Greater London.

On 1 April 1996, the unpopular[ why? ] counties of Avon, Humberside and Cleveland were abolished and their former area divided into unitary districts. Also at this time, the city of York was expanded and separated from North Yorkshire.

In April 2009, the following changes were made to the non-metropolitan counties:

The effect was that Bedfordshire and Cheshire became ceremonial counties that do not correspond to a non-metropolitan county of the same name. 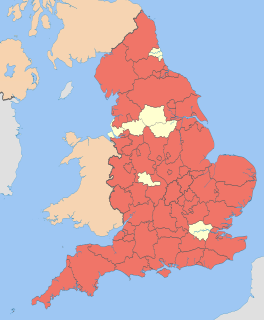 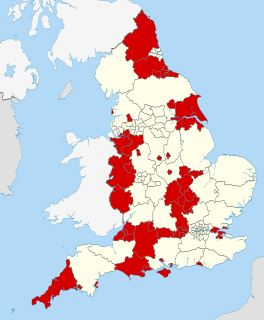 The unitary authorities of England are those local authorities which are responsible for the provision of all local government services within a district. They are constituted under the Local Government Act 1992, which amended the Local Government Act 1972 to allow the existence of counties that do not have multiple districts. They typically allow large towns to have separate local authorities from the less urbanised parts of their counties and provide a single authority for small counties where division into districts would be impractical. Unitary authorities do not cover all of England. Most were established during the 1990s, though further tranches were created in 2009 and 2019–21. Unitary authorities have the powers and functions that are elsewhere separately administered by councils of non-metropolitan counties and the non-metropolitan districts within them. 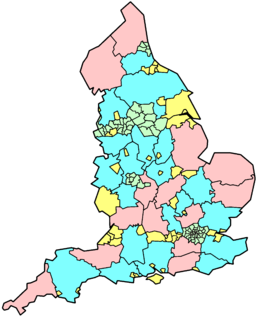