Last updated February 24, 2020
‹ The template Infobox road is being considered for merging. ›

Federal Highway 1 (Spanish : Carretera Federal 1, Fed. 1) is a free (libre) part of the federal highway corridors (los corredores carreteros federales) of Mexico, and the highway follows the length of the Baja California Peninsula from Tijuana, Baja California, in the north to Cabo San Lucas, Baja California Sur, in the south. The road connects with Via Rapida, which merges into the American Interstate 5 (I-5) at the international border south of San Ysidro, California.

The road begins in the border city of Tijuana, where it continues northward as Interstate 5. It is bypassed from here to Ensenada by Fed. 1D, a toll road. Then, the road continues south past Maneadero. Much of it follows or passes near the route of Portola's march from Loreto to San Diego during the establishment of the Spanish missions in Baja California.

Federal highway corridors in Mexico are generally designated with even numbers for east–west routes and odd numbers for north–south routes. Numerical designations usually ascend southward away from the U.S. border for east–west routes and usually ascend eastward away from the Pacific Ocean for north–south routes. Therefore, Fed. 1, due to its proximity to the Pacific Ocean, has the lowest possible odd number designation, and intersecting east–west federal highway corridors usually conform to this pattern.

Kilometer markers track the distance along Fed. 1 through Baja California in four separate improved segments. The first of these is the 109-kilometre (68 mi) length from Tijuana to Ensenada, which is known informally as Mex 1 Libre to distinguish it from Fed. 1D, the parallel toll road. The second portion of signed road runs 196 kilometres (122 mi) from Ensenada to San Quintín. The third segment comprises 128 kilometres (80 mi) from San Quintín to the Parador Punta Prieta junction. A final segment stretches 128 kilometres (80 mi) from Punta Prieta to the border of the state of Baja California Sur near Guerrero Negro. The total route of Fed. 1 in Baja California is 713 km (443 mi).

Continuing south into the two Mexican states that comprise the Baja California peninsula, Guerrero Negro is the nearest community to the point where Fed. 1 meets the 28th parallel north. Afterward Fed. 1 leaves the western coast and crosses to the eastern coast at Santa Rosalía. The route continues southward past Puerto Escondido and gains altitude at Sierra de la Giganta, then veers southwest and through agricultural lands and Ciudad Constitución. After crossing a desert the route encounters La Paz on the eastern coast. The route continues along the gulf side of the peninsula through San José del Cabo to its terminus at Cabo San Lucas. 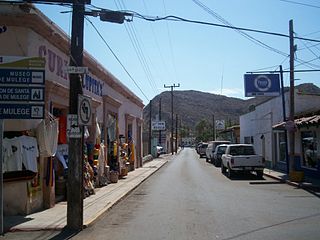 Mulegé is an oasis town in the Mexican state of Baja California Sur, situated at the mouth of the Río de Santa Rosalía. It is the fourth-largest community in Mulegé Municipality. It had a population of 3,821 according to the Mexican federal census of 2010.

San Quintín is a coastal town on the west coast of the Mexican state of Baja California, in the Municipality of San Quintin, some 190 km (118 mi.) south of the city of Ensenada on Mexican Federal Highway 1. The town is also in the middle of an important agricultural area, especially for growing strawberries and tomatoes. The largest nearby locality is Lázaro Cardenas, home to 16,294 people as of the 2010 census. The whole area houses roughly 25,000 people, up from 20,000 in 2000. This is the largest population cluster south of Ensenada within the state. 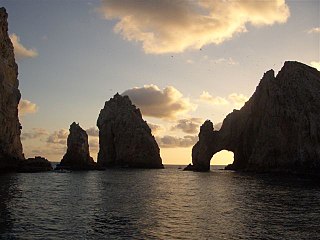 The arch of Cabo San Lucas, is a distinctive rock formation at the southern tip of Cabo San Lucas, which is itself the extreme southern end of Mexico's Baja California Peninsula. The arch is locally known as "El Arco," which means "the arch" in Spanish, or "Land's End."

San Pedro is a small town in the Sierra de la Laguna Mountains in La Paz Municipality near the southern end of Baja California Sur. It is located a few miles north of the junction of Highway 1 and Highway 19. It had a 2010 census population of 568 inhabitants, and is situated at an elevation of 200 meters (656 ft.) above sea level. 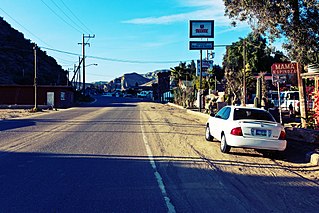 El Rosario is a small town on the west coast of the state of Baja California on Highway 1, 61 km south of San Quintín and 119 km north of Cataviña. The census of 2010 reported a population of 1,704 inhabitants. It is part of the Municipio of Ensenada.

Federal Highway 2 is a free part of the federal highway corridors that runs along the Mexico–United States border. The highway is in two separate improved segments, starting in the west at Tijuana, Baja California, on the Pacific coast and ending in the east in Matamoros, Tamaulipas, on the Gulf of Mexico. Fed. 2 passes through the border states of Baja California, Sonora, Chihuahua, Coahuila, Nuevo Leon and Tamaulipas. It has a total length of 1,963 kilometres (1,220 mi); 1,319 kilometres (820 mi) in the west and 644 kilometres (400 mi) in the east.

Garitas or Retenes are federal inspection stations operated by the Mexican government. They are officially known as "Garitas de Revisión" (checkpoints). They are usually located within 50 kilometres (31 mi) of the national border with the United States, Belize, and Guatemala. They function as immigration checkpoints, where documents and cargo are to be inspected.

Federal Highway 3 is a free part of the federal highways corridors. One segment connects Tecate to Ensenada in Baja California. This segment ends at its junction with Fed. 1 at El Sauzal Rodriguez, just a little north of Ensenada. This segment of the highway is 112 kilometers (70 mi) long.

Federal Highway 2D is a part of the federal highways corridors, and is the designation for toll highways paralleling Mexican Federal Highway 2. Seven road segments are designated Highway 2D, all but one in the state of Baja California, providing a toll highway stretching from Tijuana in the west to around Mexicali in the east; one in Sonora, between Santa Ana and Altar; and another between the cities of Matamoros and Reynosa in Tamaulipas.