A mezzo-soprano or mezzo (English: /ˈmɛtsoʊ/ , /ˈmɛzoʊ/ ; Italian pronunciation:  [ˈmɛddzo soˈpraːno] meaning "half soprano") is a type of classical female singing voice whose vocal range lies between the soprano and the contralto voice types. The mezzo-soprano's vocal range usually extends from the A below middle C to the A two octaves above (i.e. A3–A5 in scientific pitch notation, where middle C = C4; 220–880 Hz). In the lower and upper extremes, some mezzo-sopranos may extend down to the F below middle C (F3, 175 Hz) and as high as "high C" (C6, 1047 Hz). [1] The mezzo-soprano voice type is generally divided into the coloratura, lyric, and dramatic mezzo-soprano.

Typical roles for mezzo-sopranos include the stereotypical triad associated with contraltos of "witches, bitches, and britches": witches, nurses, and wise women, such as Azucena in Verdi's Il trovatore ; villains and seductresses such as Amneris in Verdi's Aida ; and "breeches roles" or "trouser roles" (male characters played by female singers) such as Cherubino in Mozart's Le nozze di Figaro . Mezzo-sopranos are well represented in baroque music, early music, and baroque opera. [1] Some roles designated for lighter soubrette sopranos are sung by mezzo-sopranos, who often provide a fuller, more dramatic quality. Such roles include Despina in Mozart's Così fan tutte and Zerlina in his Don Giovanni . [2] Mezzos sometimes play dramatic soprano roles such as Santuzza in Mascagni's Cavalleria rusticana , Lady Macbeth in Verdi's Macbeth , and Kundry in Wagner's Parsifal . [3]

The vocal range of the mezzo-sopranos lies between the soprano and the contralto voice types. Mezzo-sopranos generally have a heavier, darker tone than sopranos. The mezzo-soprano voice resonates in a higher range than that of a contralto. The terms Dugazon and Galli-Marié are sometimes used to refer to light mezzo-sopranos, after the names of famous singers. Usually men singing within the female range are called countertenors since there is a lighter more breathy tonal (falsetto) quality difference. [4] In current operatic practice, female singers with very low tessituras are often included among mezzo-sopranos, because singers in both ranges are able to cover the other, and true operatic contraltos are very rare. [1]

A coloratura mezzo-soprano has a warm lower register and an agile high register. The roles they sing often demand not only the use of the lower register but also leaps into the upper tessitura with highly ornamented, rapid passages. They have a range from approximately the G below middle C (G3, 196 Hz) to the B two octaves above middle C (B5, 988 Hz). Some coloratura mezzo-sopranos can sing up to high C (C6, 1047 Hz) or high D (D6, 1175 Hz), but this is very rare. [1] What distinguishes these voices from being called sopranos is their extension into the lower register and warmer vocal quality. Although coloratura mezzo-sopranos have impressive and at times thrilling high notes, they are most comfortable singing in the middle of their range, rather than the top. [3]

Many of the hero roles in the operas of Handel and Monteverdi, originally sung by male castrati, can be successfully sung today by coloratura mezzo-sopranos. Rossini demanded similar qualities for his comic heroines, and Vivaldi wrote roles frequently for this voice as well. Coloratura mezzo-sopranos also often sing lyric-mezzo-soprano roles or soubrette roles. [2]

Gilbert and Sullivan and operetta

All of Gilbert and Sullivan's Savoy operas have at least one mezzo-soprano character. Notable operetta roles are:

A baritone is a type of classical male singing voice whose vocal range lies between the bass and the tenor voice-types. The term originates from the Greek βαρύτονος (barýtonos), meaning "heavy sounding". Composers typically write music for this voice in the range from the second F below middle C to the F above middle C (i.e. F2–F4) in choral music, and from the second G below middle C to the G above middle C (G2 to G4) in operatic music, but the range can extend at either end. The baritone voice-type is generally divided into the baryton-Martin baritone (light baritone), lyric baritone, Kavalierbariton, Verdi baritone, dramatic baritone, baryton-noble baritone, and the bass-baritone.

A bass-baritone is a high-lying bass or low-lying "classical" baritone voice type which shares certain qualities with the true baritone voice. The term arose in the late 19th century to describe the particular type of voice required to sing three Wagnerian roles: the Dutchman in Der fliegende Holländer, Wotan/Der Wanderer in the Ring Cycle and Hans Sachs in Die Meistersinger von Nürnberg. Wagner labelled these roles as Hoher Bass —see fach for more details. The word coloratura is originally from Italian, literally meaning "coloring", and derives from the Latin word colorare. When used in English, the term specifically refers to elaborate melody, particularly in vocal music and especially in operatic singing of the 18th and 19th centuries, with runs, trills, wide leaps, or similar virtuoso-like material. 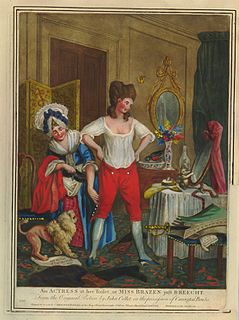 A breeches role is a role in which an actress appears in male clothing. Breeches, tight-fitting knee-length pants, were the standard male garment at the time breeches roles were introduced. 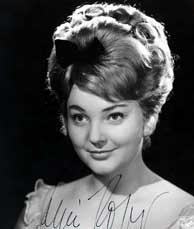 Lucia Popp was a Slovak operatic soprano. She began her career as a soubrette soprano, and later moved into the light-lyric and lyric coloratura soprano repertoire and then the lighter Richard Strauss and Wagner operas. Her career included performances at Vienna State Opera, the Metropolitan Opera, Covent Garden, and La Scala. Popp was also a highly regarded recitalist and lieder singer.

A voice type classifies a singing voice by vocal range, vocal weight, tessitura, vocal timbre, vocal transition points (passaggi) like breaks and lifts, and vocal register. Voice classification was developed for European classical music and seldom applies to other kinds of singing; voice classification is in the opera to pair roles with voices. Several different voice classification systems are available to identify voice types, including the German Fach system and the choral music system among many others; no system is universally applied or accepted.

There is no authoritative system of voice classification in non-classical music as classical terms are used to describe not merely various vocal ranges, but specific vocal timbres unique to each range. These timbres are produced by classical training techniques with which most popular singers are not intimately familiar, and which even those that are do not universally employ.

Soprano sfogato is a contralto or mezzo-soprano who is capable—by sheer industry or natural talent—of extending her upper range and being able to encompass the coloratura soprano tessitura. An upwardly extended "natural" soprano is sometimes called soprano assoluto. 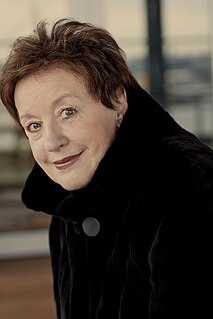