The miaodao (苗刀) is a Chinese two-handed dao or saber of the Republican Era, with a narrow blade, long hilt, and an overall length of 1.2 metres (47 in) or more. The name means "sprout saber", presumably referring to a likeness between the weapon and a newly sprouted plant. An early reference, in Jin Yiming’s Single Defense-Saber, makes a connection between the miaodao and the Qing-era wodao, as well as mentioning both single and two-handed versions of the ‘’miaodao’’, suggesting that the name originally described the shape only, without any connotations of size. While the miaodao is a recent weapon, the name has come to be applied to a variety of earlier Chinese long sabers, such as the zhanmadao and changdao. Along with the dadao, miaodao were used by some Chinese troops during the Second Sino-Japanese War.

While the miaodao is rarely practiced in modern Chinese martial arts, some schools of piguaquan and tongbeiquan (in the Guo Changsheng lineage) and xingyiquan train with the weapon. The miaodao is also often mistakenly claimed to have been one of the weapons taught at the Central Military Academy in Nanjing; the weapon in question was actually a European-style officer's saber, though some later schools may have based miaodao techniques on this form.

The "miao" of miaodao should not be confused with the Miao ethnic group, who are not associated with this weapon.

Zanbatō (斬馬刀) is an especially large, single-edged sword dating to the Heian period of historical Japan. The name zanbatō translates to "horse-slaying sword" or "horse-chopping saber". Original examples came from Song Dynasty China and were employed by anti-cavalry infantry in the same manner. 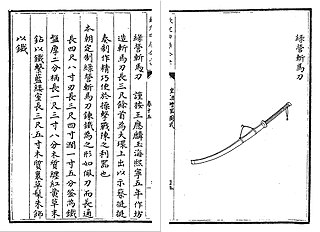 The wodao is a Chinese sword from the Ming Dynasty. It is typically long and slender, but heavy, with a curved back and sharp blade. It bears a strong resemblance to the Tang sword, zhanmadao, Tachi or Odachi in form. Extant examples show a handle approximately 25.5 cm long, with a gently curved blade 80 cm long. 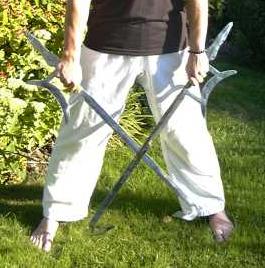 Chicken sickles are a number of Chinese bladed weapons similar to the Hook sword and the Okinawan Kama. They can be used as a single or double weapon. It is considered the special weapon of the Xinyi Liuhe style.

Various martial arts have been attributed to or associated with Zhou Tong, the archery teacher of Song Dynasty general, Yue Fei. This is because assorted wuxia novels and folk legends portray him as being either a Shaolin monk or a lay disciple of Shaolin. Some of these skills range from mastery of the bow, double swords and Chinese spear to that of Wudang hard qigong, Chuojiao boxing and even magical X-ray eyes. However, the oldest historical record that mentions his name only says he taught archery to Yue Fei. Nothing is ever said about him knowing or teaching a specific style of Chinese martial arts. 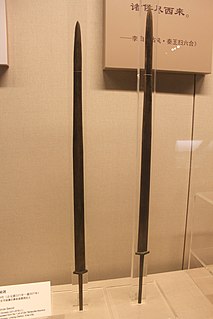 Historically, all Chinese swords are classified into two types, jian and dao. Jians are double-edged straight swords while daos are single-edged, and mostly curved from the Song dynasty forward. The jian has been translated at times as a long sword, and the dao a saber or a knife. Bronze jians appeared during the mid-third century BC and switched to wrought iron and steel during the late Warring States period. Other than specialized weapons like the Divided Dao, Chinese swords are usually 70–110 cm (28–43 in) in length, although longer swords have been found on occasion. Outside of China, Chinese swords were also used in Japan from the third to the sixth century AD, but were replaced with Korean and native Japanese swords by the middle Heian era.

The Niuweidao was a type of Chinese saber (dao) of the late Qing Dynasty period. A heavy bladed weapon with a characteristic flaring tip, it was primarily a civilian weapon, as Imperial troops were never issued it.