listen ) or miestelis (Lithuanian:  [mjeːstæːlîːs] ), (lit. 'small town') was a historical type of urban settlement similar to a market town in the former Polish–Lithuanian Commonwealth. After the partitions of Polish–Lithuanian Commonwealth at the end of the 18th-century, these settlements became widespread in the Austrian, German and Russian Empires. The vast majority of miasteczkos had significant or even predominant Jewish populations; these are known in English under the Yiddish term shtetl . Miasteczkos had a special administrative status other than that of town or city. [1] [2]

The meaning "small town" is somewhat misleading, since some 19th-century shtetls, such as Berdichev or Bohuslav counted over 15,000 people. Therefore, after Russian authorities annexed parts of Poland-Lithuania (which included parts of modern Poland, Belarus, Ukraine and Lithuania), they had difficulties in formally defining what a miasteczko is. [3]

Typically miasteczkos grew out of or still remained private towns belonging to Polish-Lithuanian landlords (usually magnates), who sought to obtain royal privileges to establish markets and fairs, and to do business in liquor. The town owners favored the Jews in order for them to bring in trade, including trade in liquor. [3]

After the incorporation of Polish lands into the Russian Empire, the authorities started converting private towns into state-owned towns (Russian term: kazyonny gorod, literally "treasury-owned town"). This process intensified after the Polish November Uprising (1830–31). However the term mestechko continued to be applied to both private and state-seized towns. [3]

In modern times in Poland miasteczko does not have a special administrative status, and the term is informally used for small towns, as well as for settlements which lost town privileges (see List of former cities of Poland). [4]

In Lithuania miestelis does have a special administrative status and the term is used for small towns, usually smaller than a town (named miestas) or a city (usually named both miestas – lit. 'a town, a city' or didmiestis - lit. 'a large city'), but larger than a kaimas (lit. 'a large village'). The majority of inhabitants of miestelis should work in manufacturing, retail or service industries as opposed to a village type of settlement (kaimas), where the majority of inhabitants are employed in agriculture (there are some villages with more inhabitants than miestelis in Lithuania). Miestelis status is also applied for settlements which historically were more prominent than today, once had, but lost its town privileges. Usually a miestelis is inhabited between 500 and 3000 people. In 2021 there are 247 miestelis type settlements in Lithuania (235 in 1986). [5] [6]

In modern Russia the borrowed term does not have universal official meaning, however some administrative divisions officially define the category of mestechko of rural settlements. 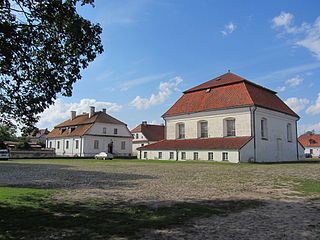 A shtetl or a shtetel was a small town with a large Jewish population which existed in Central and Eastern Europe before the Holocaust. Shtetls were mainly found in the areas that constituted the 19th century Pale of Settlement in the Russian Empire as well as in Congress Poland, Austrian Galicia, Romania and Hungary. 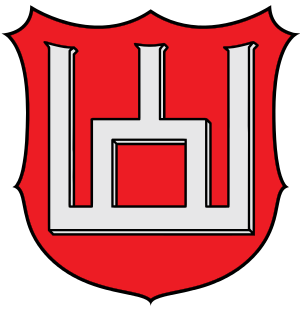 The Lithuanian nobility was historically a legally privileged class in the Kingdom of Lithuania and Grand Duchy of Lithuania consisting of Lithuanians, from the historical regions of Lithuania Proper and Samogitia, and, following Lithuania's eastern expansion, many Ruthenian noble families (boyars). Families were primarily granted privileges for their military service to the Grand Duchy. The Polish–Lithuanian Commonwealth had one of the largest percentages of nobility in Europe, close to 10% of the population, in some regions, like Samogitia, it was closer to 12%. However, the high nobility was extremely limited in number, consisting of the magnates and later, within the Russian Empire, of princes.

Maladzyechna is a city in the Minsk Region of Belarus, an administrative centre of the Maladzyechna District. It has 98,514 inhabitants and is located 72 km northwest of Minsk. Located on the Usha River, it has been a settlement since 1388 when it was part of the Grand Duchy of Lithuania. It was also home to the Cold War facility Maladzyechna air base. 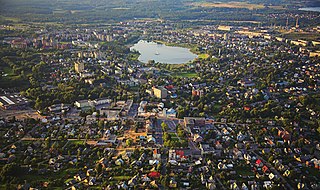 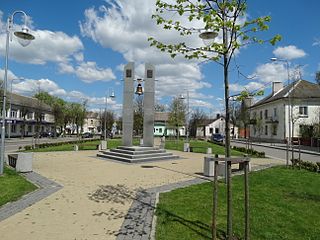 Eišiškės is a small city in southeastern Lithuania on the border with Belarus. It is situated on a small group of hills, surrounded by marshy valley of Verseka and Dumblė Rivers. The rivers divide the town into two parts; the northern part is called Jurzdika. As of the census in 2011, Eišiškės had a population of 3,416. It has a hospital and two high schools. 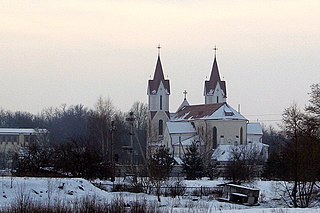 Švenčionys is a town located 84 kilometers (52 mi) north of Vilnius in Lithuania. It is the capital of the Švenčionys district municipality. As of 2020, it had population of 4,065 of which about 17% is part of the Polish minority in Lithuania. 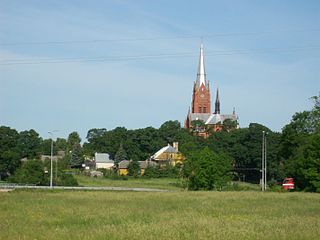 Ramygala is a city in Lithuania. It is located some 24 km (15 mi) south from Panevėžys on the banks of the Upytė River, a tributary to the Nevėžis River. According to 2017 estimate, it had 1,440 residents. 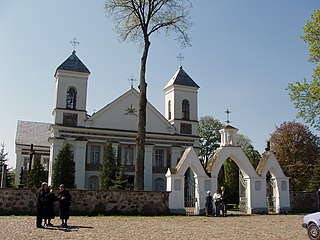 Valkininkai is a historic town in Valkininkų (Valkininkai) eldership, Varėna district municipality, Alytus County, Lithuania, located about 22 km (14 mi) northeast from Varėna and about 55 km (34 mi) southwest from Vilnius. At the 2001 census its population was 238 and at the 2011 census it was 229.

Josvainiai is a small town in Kėdainiai district, central Lithuania. It is located on the Šušvė River 10 km southwest from Kėdainiai. In the town there is a Catholic All Saints Church, gymnasium, post office and public library, stud farm, culture house. 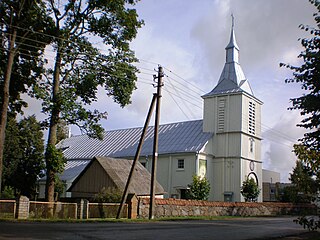 Pernarava is a small town in Kėdainiai District Municipality, Kaunas County in central Lithuania. In 2011 it had a population of 232. It is located 11 kilometres (6.8 mi) from Ariogala, 26 kilometres (16 mi) from Kėdainiai. There are wooden Catholic church of Crucified Jesus, dispensary, school, library, monument for postwar partisans of Kęstutis military district.

Městys, translated as "market town", is a status conferred on certain municipalities in the Czech Republic, lying in terms of size and importance higher than that of simple obec (municipality), but lower than that of město. 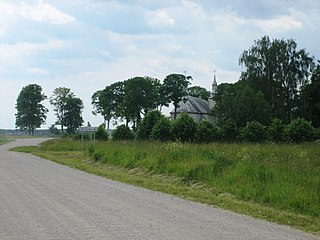 Šešuoliai is a small town in central Lithuania. It is located just east of the Lake Šešuoliai. According to the Lithuanian census of 2011, it had 138 residents. The town's central square and street layout is protected as an urban monument. 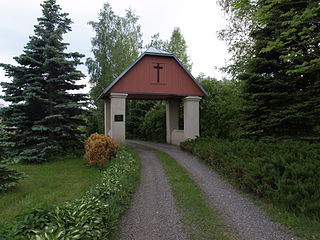 Darsūniškis is a settlement on the Nemunas River in Kaišiadorys District Municipality, western Lithuania. The village is one of the oldest settlements in Lithuania and dates back to the 14th century. 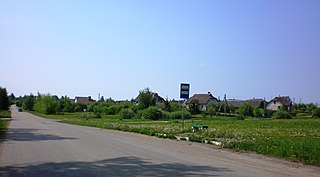 Meironiškiai is a village in Kėdainiai district municipality, in Kaunas County, in central Lithuania. According to the 2011 census, the village had a population of 269 people. It is located 2.5 kilometres (1.6 mi) from Krakės town, by the Krakės-Josvainiai road, nearby the Smilgaitis and the Dangaučius rivers. There are a shop, a community house, a medicine station, a farm in Meironiškiai. Two big stones standing in the village are declared as a nature heritage object.