Michael Charles Corballis ONZM (10 September 1936 – 13 November 2021) was a New Zealand and Canadian [1] psychologist and author. He was Emeritus Professor at the Department of Psychology at the University of Auckland. His fields of research were cognitive psychology and cognitive neuroscience, encompassing visual perception, visual imagery, attention, memory, and the evolution of language.

Corballis was born in the farming district of Marton, New Zealand, in 1936, the eldest of four sons of sheep farmers Philip Patrick Joseph Corballis and Alice Elizabeth Harris. In 1962, Corballis married Barbara Elizabeth Wheeler; they had two sons: [2] Paul, also a cognitive neuroscientist, [3] and Tim, a novelist [4] and academic. [5] Barbara Corballis died in 2020. [6]

In 1978, Corballis was appointed professor of psychology at the University of Auckland. From 1993 to 2000, he was also Director of the Research Centre for Cognitive Neuroscience within the department. In 2008, Corballis became emeritus professor. In 2014, he became the university's Inaugural Creativity Fellow. [1] Corballis remained active at the university until his death on 13 November 2021. [7] [8]

In July 2021, Corballis and six other University of Auckland professors wrote a controversial letter "In Defence of Science" to the New Zealand Listener magazine, in which they said that Māori knowledge should not be considered in the same category as science because of the former's spiritual content. [9]

During Corballis's years at McGill, the main focus of his research was in cognitive neuroscience, analyzing complex cognitive systems such as perception, attention, and memory, and initiating a research program on cerebral asymmetry. [10] He continued those research areas at University of Auckland. In the 21st century, Corballis's turned to evolutionary biology, contributing significantly to complex cognitive processes. [10] Of great interest was his hypothesis that human language evolved from gestures, expressed in the book From hand to mouth; it received more than 1500 citations in its first year. [11]

Over his career, Corballis published more than 400 scientific papers and book chapters, and 14 books. His work was cited more than 27,000 times, giving him a h-index of 77. [11] Corballis supervised the work of at least 14 research assistants, graduate students, and postdoctoral fellows, who, in turn supervised more than 50 students and fellows, leaving a lasting human scientific legacy. [12]

Corballis served in many roles that supported various academic pursuits.

In 2009, he was president of the International Neuropsychological Society. [13]

Corballis edited the New Zealand Journal of Psychology from 1994 to 1997. [1] He founded the journal Laterality in 1995 and co-edited it until 2008. [13] He also was a member of numerous editorial boards [1] and wrote numerous reviews of scientific manuscripts submitted to scores of journals, of which 137 are recorded in Publons. [14]

Corballis died in November 2021, after a brief battle with cancer. Among those who paid tribute to him was the Harvard professor Steven Pinker, who described his "beloved former professor" as having done "brilliant work on handedness, mental rotation," and the evolution of language. He further described Corballis as "urbane, charming, witty, irreverent." [19]

Cognitive psychology is the scientific study of mental processes such as attention, language use, memory, perception, problem solving, creativity, and reasoning. 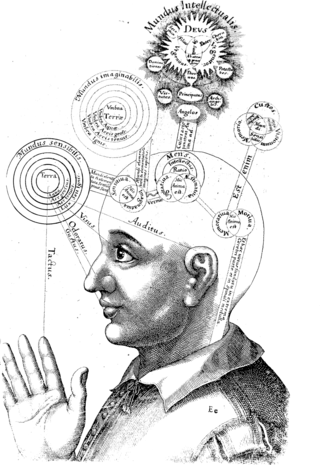 Cognition refers to "the mental action or process of acquiring knowledge and understanding through thought, experience, and the senses". It encompasses all aspects of intellectual functions and processes such as: perception, attention, thought, intelligence, the formation of knowledge, memory and working memory, judgment and evaluation, reasoning and computation, problem solving and decision making, comprehension and production of language. Imagination is also a cognitive process, it is considered as such because it involves thinking about possibilities. Cognitive processes use existing knowledge and discover new knowledge. 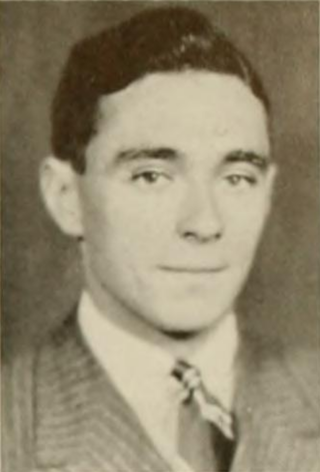 Jerome Seymour Bruner was an American psychologist who made significant contributions to human cognitive psychology and cognitive learning theory in educational psychology. Bruner was a senior research fellow at the New York University School of Law. He received a BA in 1937 from Duke University and a PhD from Harvard University in 1941. He taught and did research at Harvard University, the University of Oxford, and New York University. A Review of General Psychology survey, published in 2002, ranked Bruner as the 28th most cited psychologist of the 20th century. 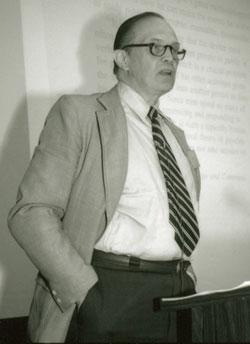 George Armitage Miller was an American psychologist who was one of the founders of cognitive psychology, and more broadly, of cognitive science. He also contributed to the birth of psycholinguistics. Miller wrote several books and directed the development of WordNet, an online word-linkage database usable by computer programs. He authored the paper, "The Magical Number Seven, Plus or Minus Two," in which he observed that many different experimental findings considered together reveal the presence of an average limit of seven for human short-term memory capacity. This paper is frequently cited by psychologists and in the wider culture. Miller won numerous awards, including the National Medal of Science.

David Cyril Geary is a United States cognitive developmental and evolutionary psychologist with interests in mathematical learning and sex differences. He is currently a Curators’ Professor and Thomas Jefferson Fellow in the Department of Psychological Sciences and Interdisciplinary Neuroscience Program at the University of Missouri in Columbia, Missouri.

Endel Tulving is an Estonian-born Canadian experimental psychologist and cognitive neuroscientist. In his research on human memory he proposed the distinction between semantic and episodic memory. Tulving is a professor emeritus at the University of Toronto. He joined the Rotman Research Institute at Baycrest Health Sciences in 1992 as the first Anne and Max Tanenbaum Chair in Cognitive Neuroscience and remained there until his retirement in 2010. In 2006, he was named an Officer of the Order of Canada, Canada's highest civilian honour.

Michael I. Posner is an American psychologist who is a researcher in the field of attention, and the editor of numerous cognitive and neuroscience compilations. He is emeritus professor of psychology at the University of Oregon, and an adjunct professor at the Weill Medical College in New York. A Review of General Psychology survey, published in 2002, ranked Posner as the 56th most cited psychologist of the 20th century.

Steven C. Hayes is an American clinical psychologist and Nevada Foundation Professor at the University of Nevada, Reno Department of Psychology, where he is a faculty member in their Ph.D. program in behavior analysis. He is known for developing relational frame theory, an account of human higher cognition. He is the co-developer of acceptance and commitment therapy (ACT), a popular evidence-based form of psychotherapy that uses mindfulness, acceptance, and values-based methods, and is the co-developer of process-based therapy (PBT), a new approach to evidence-based therapies more generally. He also coined the term clinical behavior analysis.

Judith F. Kroll is a Distinguished Professor of Language Science at University of California, Irvine. She specializes in psycholinguistics, focusing on second language acquisition and bilingual language processing. With Randi Martin and Suparna Rajaram, Kroll co-founded the organization Women in Cognitive Science in 2001. She is a Fellow of the American Association for the Advancement of Science (AAAS), the American Psychological Association (APA), the Psychonomic Society, the Society of Experimental Psychologists, and the Association for Psychological Science (APS).

Marlene Behrmann is a Professor in the Department of Ophthalmology at the University of Pittsburgh. She was previously a Professor of Psychology at Carnegie Mellon University. She specializes in the cognitive neuroscience of visual perception, with a specific focus on object recognition.

Allan M. Collins is an American cognitive scientist, Professor Emeritus of Learning Sciences at Northwestern University's School of Education and Social Policy. His research is recognized as having broad impact on the fields of cognitive psychology, artificial intelligence, and education.

Nicola Susan Clayton PhD, FRS, FSB, FAPS, C is a British psychologist. She is Professor of Comparative Cognition at the University of Cambridge, Scientist in Residence at Rambert Dance Company, co-founder of 'The Captured Thought', a Fellow of Clare College, Cambridge, where she is Director of Studies in Psychology, and a Fellow of the Royal Society since 2010. Clayton was made Honorary Director of Studies and advisor to the 'China UK Development Centre'(CUDC) in 2018. She has been awarded professorships by Nanjing University, Institute of Technology, China (2018), Beijing University of Language and Culture, China (2019), and Hangzhou Diangi University, China (2019). Clayton was made Director of the Cambridge Centre for the Integration of Science, Technology and Culture (CCISTC) in 2020.

Freda Gladys Newcombe (1925–2001) was a British clinical neuropsychologist who played a pivotal role in the development of the discipline of cognitive neuropsychology. She was a fellow of Linacre College, Oxford, from 1968–1992, and then Honorary Fellow from 1992. She served as President of the International Neuropsychological Society in 1985 and was made an Honorary Fellow of the British Psychological Society in 1994. She was awarded an honorary degree by the University of Essex in 1995. 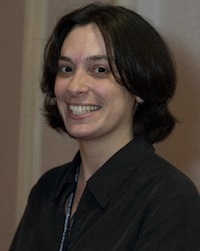 Dr. Sharon Thompson-Schill is the Christopher H. Browne Distinguished Professor of Psychology at the University of Pennsylvania in Philadelphia, Pennsylvania. She is an expert on the biological basis of human cognitive systems, including language, memory, perception, and cognitive control, and the relationships between these systems. As of 2019, she has produced more than 150 scientific publications, which collectively have been cited over 13,700 times.

Stephan Hamann is an American psychologist and professor of psychology at Emory University in Atlanta, Georgia, where he has worked since 1996. His research focuses on understanding the neural basis of emotion, memory, and their interaction, using a combination of neuroimaging and neuropsychological approaches. He is currently Editor-in-Chief of the journal Neuropsychologia.

Clive Wilkins is a British figurative artist. He is the author of The Moustachio Quartet, a series of novels that explore perception and the subjective experience of thinking; and with Nicky Clayton is co-founder of the Captured Thought, an arts and science collaboration. He is the first Artist in Residence in the Department of Psychology at The University of Cambridge, a position held since 2012. Wilkins, along with Clayton, was made Honorary Director of Studies and advisor to the China UK Development Centre (CUDC) in 2018. He has been awarded professorships by Nanjing University, Institute of Technology, China (2018), Beijing University of Language and Culture, China (2019), and Hangzhou Diangi University, China (2019). Wilkins was made Co-Director of the Cambridge Centre for the Integration of Science, Technology and Culture (CCISTC) in 2020.

Fei Xu is an American developmental psychologist and cognitive scientist who is currently a professor of psychology and the director of the Berkeley Early Learning Lab at UC Berkeley. Her research focuses on cognitive and language development, from infancy to middle childhood.