Last updated May 06, 2020
Emperor and Autocrat of the Romans

Michael was the son of the patrician Theophylact Rhangabe, the admiral of the Aegean fleet. [1] He married Prokopia, the daughter of the future Emperor Nikephoros I, [2] and received the high court dignity of kouropalatēs after his father-in-law's accession in 802.

Michael survived Nikephoros' disastrous campaign against Krum of Bulgaria, and was considered a more appropriate candidate for the throne than his severely injured brother-in-law Staurakios. [2] When Michael's wife Prokopia failed to persuade her brother to name Michael as his successor, a group of senior officials (the magistros Theoktistos, the Domestic of the Schools Stephen, and Patriarch Nikephoros) forced Staurakios to abdicate in his favor on 2 October 811.

Michael I attempted to carry out a policy of reconciliation, abandoning the exacting taxation instituted by Nikephoros I. While reducing imperial income, Michael generously distributed money to the army, the bureaucracy, and the Church. [3] Elected with the support of the Orthodox party in the Church, Michael diligently persecuted the iconoclasts and forced the Patriarch Nikephoros to back down in his dispute with Theodore of Stoudios, the influential abbot of the monastery of Stoudios. Michael's piety won him a very positive estimation in the work of the chronicler Theophanes the Confessor.

In 812 Michael I reopened negotiations with the Franks, and recognized Charlemagne as imperator and basileus (Emperor), but not Emperor of the Romans. [4] [5] [6] In exchange for that recognition, Venice was returned to the Empire. However, under the influence of Theodore, Michael rejected the peace terms offered by Krum and provoked the capture of Mesembria (Nesebar) by the Bulgarians. After an initial success in spring 813, Michael's army prepared for a major engagement at Versinikia near Adrianople in June. [2] The imperial army was defeated, while Leo the Armenian fled from the battle. [2] With conspiracy in the air, Michael preempted events by abdicating on 11 July 813 in favor of the general Leo the Armenian and becoming a monk (under the name Athanasios). [7] [2] His sons were castrated and relegated into monasteries, [7] one of them, Niketas (renamed Ignatios), eventually becoming Patriarch of Constantinople. [8] Michael died 11 January 844. [9]

By his wife Prokopia, Michael I had at least five children: 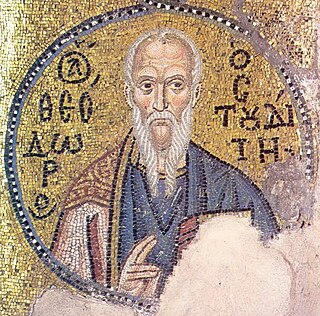 Theodore the Studite was a Byzantine Greek monk and abbot of the Stoudios Monastery in Constantinople. He played a major role in the revivals both of Byzantine monasticism and of classical literary genres in Byzantium. He is known as a zealous opponent of iconoclasm, one of several conflicts that set him at odds with both emperor and patriarch.

Leo V the Armenian was Emperor of the Byzantine Empire from 813 to 820. A senior general, he forced his predecessor, Michael I Rangabe, to abdicate and assumed the throne. He ended the decade-long war with the Bulgars, and initiated the second period of Byzantine Iconoclasm. He was assassinated by supporters of Michael the Amorian, one of his most trusted generals, who succeeded him on the throne. 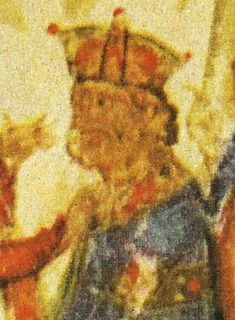 Nikephoros I, or Nicephorus I was Byzantine Emperor from 802 to 811, when he was killed in the Battle of Pliska. Prior to his accession, he had served as genikos logothetēs, whence he is sometimes surnamed "the Logothete" and "Genikos" or "Genicus".

Staurakios or Stauracius was Byzantine Emperor from 26 July to 2 October 811. He was born in the early 790s, probably between 791 and 793, to Nikephoros I and an unknown woman. Nikephoros seized the throne of the Byzantine Empire from Empress Irene in 802, and elevated Staurakios to co-emperor in December 803. After Nikephoros fell in the Battle of Pliska on 26 July 811, Staurakios was declared emperor, despite his severe injuries from the battle. His reign was short due to the political uncertainties surrounding his wounds, which included the severing of his spine; he was usurped by his brother-in-law, Michael I Rangabe, on 2 October 811. After being removed from power, he was sent to live in a monastery, where he stayed until he died of gangrene or poisoning on 11 January 812. 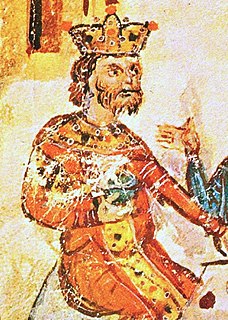 Krum, often referred to as Krum the Fearsome was the Khan of Bulgaria from sometime between 796 and 803 until his death in 814. During his reign the Bulgarian territory doubled in size, spreading from the middle Danube to the Dnieper and from Odrin to the Tatra Mountains. His able and energetic rule brought law and order to Bulgaria and developed the rudiments of state organization. 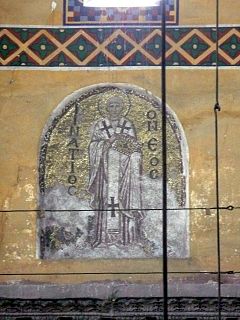 Prokopia was the Empress consort of Michael I Rhangabe of the Eastern Roman Empire. She was a daughter of Nikephoros I. The name of her mother is not known. Her only known sibling is Staurakios.

Theophano was the Empress consort of Staurakios of the Byzantine Empire. According to the chronicle of Theophanes the Confessor, Theophano was a relative of Irene. Both women were from Athens but the nature of their relation to each other is not known.

The Hikanatoi, sometimes Latinized as Hicanati, were one of the Byzantine tagmata, the elite guard units based near the imperial capital of Constantinople. Founded in the early 9th century, it survived until the late 11th century.

Aetios or Aetius was an Eastern Roman eunuch official and one of the most trusted advisers of empress Irene of Athens. After Irene's rise to sole rule, Aetios developed an intense rivalry with her eunuch chief minister Staurakios. After Staurakios's death, Aetios became the leading man in the state. He plotted to usurp the throne for his brother, Leo, but lost power when Irene was deposed in 802.

Nikephoros, also Latinized as Nicephorus or Nicephoros, was the second son of Byzantine emperor Constantine V and Caesar of the Byzantine Empire. He was engaged in a plot against his half-brother, Leo IV, which cost Nikephoros his title, and was the focal point of numerous usurpation plots during the subsequent reigns of his nephew, Constantine VI, and of Constantine's mother, Irene of Athens. He was therefore blinded and exiled to a monastery for most of his life, probably dying in the island of Aphousia sometime after 812.

Symbatios, variously also Sabbatios (Σαββάτιος) or Sambates (Σαμβάτης) in some sources, was the eldest son of the Byzantine emperor Leo V the Armenian. Soon after the coronation of his father, he was crowned co-emperor and renamed Constantine (Κωνσταντῖνος). He reigned nominally along with his father until the latter's deposition in 820, after which he was exiled to Prote, one of the Princes Islands, as a monk.

Following the deposition of the Byzantine empress Irene of Athens, the throne of the Byzantine Empire passed to a relatively short-lived dynasty, the Nikephorian dynasty, named after its founder, Nikephoros I. The empire was in a weaker and more precarious position than it had been for a long time and its finances were problematic. 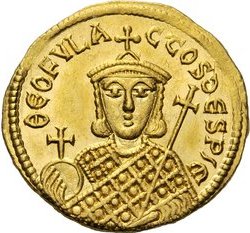 Theophylact or Theophylaktos was the eldest son of the Byzantine emperor Michael I Rhangabe and grandson, on his mother's side, of Nikephoros I. He was junior co-emperor alongside his father for the duration of the latter's reign, and was tonsured, castrated, and exiled to Plate Island after his overthrow, under the monastic name Eustratius.

Theophylact Rhangabe or Theophylaktos Rhangabe, was a Byzantine admiral, and the father of the emperor Michael I Rhangabe.

Theoktistos was a senior Byzantine official who played an important role under the Nikephorian dynasty (802–813).