Michalis Kapsis (Greek : Μιχάλης Καψής, born 18 October 1973) is a retired Greek footballer, who played at the position of central defender. He was an integral part of Greece's UEFA Euro 2004 winning squad. At club level, he played most notably for Olympiacos, Girondins de Bordeaux and AEK Athens. He is the son of Anthimos Kapsis, who played for Panathinaikos in the 1971 European Cup final.

He turned in a number of impressive performances for Aris Nikeas playing 21 games.

In the summer 1991 he joined to AO Neapolis having an impressive performances for AO Neapolis playing 24 games.

The step up in class did not have a negative effect on the player's game, Kapsis amassing 30 appearances – his highest tally ever. In total he scored just one goal in 123 games for the new club. Michalis Kapsis helped Ethnikos Piraeus achieve promotion to the Greek top flight in his first season at the club, 1993/94

During the 1998/99 season, Michalis Kapsis joined AEK. He finished that campaign with 15 AEK appearances under his belt in 1999 and was a regular over the next two seasons before, in 2001/02, he was fined for his involvement in a training ground row with goalkeeper Elias Atmatsidis, as AEK surrendered the championship to Olympiacos CFP in the closing weeks of the season. In 2002/03, he featured in AEK's six UEFA Champions League draws. It was the first time in Greek football history that both a father and his son had participated in the top European clubs' competition; his father Anthimos had been playing for Panathinaikos in the Champions' Cup during the 70's (the two were followed some years later by Celtic's Georgios Samaras, son of Ioannis). He also played 20 Alpha Ethniki games. Kapsis was his usual consistent self in what was a disappointing 2003/04 campaign for AEK, who finished fifth. Fine performances earned him a call-up for the critical UEFA EURO 2004 qualifying matches against Spain and Ukraine; he marked Raúl González and Andriy Shevchenko superbly in famous victories. He was also ever-present in the wonderful run in Euro 2004 that gave Greece the European title, and remained a regular in FIFA World Cup qualifying.

After EURO 2004, he left AEK and signed for FC Girondins de Bordeaux. [1] He played 29 league matches in France,. [2] After this performance many club made an offer to Michalis Kapsis for a possible new contract.

In the summer 2005 he signed two-year deal with champions Olympiacos. He has since failed to settle at the Piraeus club. Frequent injuries and a lack of confidence from successive coaches have deprived him of a first-team slot. There was often speculation about his future at the club, and he was allegedly offered as an exchange in a failed transfer bid for PAOK's Dimitris Salpingidis. Trond Sollied announced on 31 August 2006 that Kapsis would not be included in the team eligible to participate in the 2006-7 UEFA Champions League competition.

Michalis in February 2007 moved to APOEL in Nicosia, Cyprus and helped the club win the champion title race for 2007. The agreement was for that season only with the option to renew for the next one. Kapsis renewed, extremely pleased with the club. In August 2007 PAOK FC chairman Theodoros Zagorakis was interested in bringing him to PAOK. Kapsis said that is proud of PAOK's interest, but is also under a contract at APOEL and will honor this. At the end of the season he won the 2008 Cypriot Cup with APOEL.

In July 2008 he signed a 2-year contract with the minor Super League side of Levadiakos. Michalis Kapsis made his debut for Levadiakos in the Super League on 31 August 2008 against Aris Thessaloniki at the Harilaou Stadium in Thessaloniki. Michalis Kapsis helped the team during the season 2008–2009 to not be relegated to the second division becoming one of the most important player with experience for the new team. He played the first match of season 2009/2010 against Kavala FC, where the goalkeeper Fanis Katergiannakis and the midfield Vassilios Lakis played.

In February 2010 Michalis Kapsis signed for Ethnikos Piraeus, expressing his desire to play for the team where he debuted as a professional player before retiring.

Michalis Kapsis was included in the squad of Euro 2004 [3] that ended up winning the tournament and in particular Kapsis achieved a great performance. Kapsis was included in the Greek squad for the 2005 FIFA Confederations Cup in Germany. Otto Rehhagel also included him in the squad for the qualifying rounds to the UEFA Euro 2008 in Switzerland and Austria. Michalis Kapsis made 34 appearances and even scored a goal against Georgia for FIFA World Cup qualification 2006 on 26 March 2005 in Georgia where Greece won 1–3.

The Super League Greece or Super League 1, is the highest professional association football league in Greece. The league was formed on 16 July 2006 and replaced Alpha Ethniki at the top of the Greek football league system. It consists of 14 teams and runs from August to May, with teams playing 26 games each followed by a 10 game play-off to decide the champions.

Themistoklis "Demis" Nikolaidis is a Greek former professional footballer who played as a striker. He was the forty second president of AEK Athens FC, and is considered one of the finest footballers Greece has ever produced. In his early childhood and teenage years he lived in the city of Alexandroupoli, in the north-east part of Greece. In a sterling career with Ethnikos Alexandroupolis, Apollon Smyrnis, AEK Athens FC and Atlético Madrid, Nikolaidis earned his reputation as a "born goalscorer", scoring prolifically for club and country. His power, pace and skill on the ball have been widely praised but it was his work-ethic and enthusiasm, perhaps, that propelled him to his exalted status among Greek footballers.

Dionisis Chiotis is a Greek former professional footballer who played as a goalkeeper. 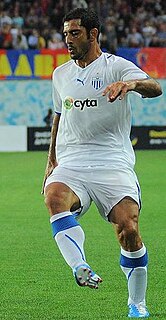 Ioannis "Giannis" Okkas, born 11 February 1977 in Larnaca) is a retired Cypriot Striker and a football manager. He was also the captain of the National Team of Cyprus for many years and he is the 2nd leading scorer of all time just behind Michalis Konstantinou, scoring in total 27 goals for Cyprus. With 106 national caps since 1997, Okkas has made more appearances for Cyprus than any other player in history.

Andreas Glyniadakis is a Greek professional basketball player. He was a 7 ft 1 in (2.16 m) tall center. His professional club playing career started in 1997.

Michalis "Mika" Kakiouzis is a Greek former professional basketball player. At a height of 2.07 m tall, he was able to play at both the small forward and power forward positions.

Giorgos Donis is a Greek former professional footballer who played as a midfielder. He last managed Greek Superleague club Panathinaikos. He was the first ever Greek to play in the English Premier League. In England, he was also known as George Donis.

Ethnikos Piraeus 1923 Football Club is a Greek football club based in Piraeus. The club was official formed in 1923 as Ethnikos Omilos Filathlon Piraeus Faliro, and played its first competitive match in 1923 for the Piraeus Football Clubs Association championship, where they eventually lost their first title competing for from A.P.S.P. Ethnikos Piraeus was one of the founding members of Hellenic Football Federation in 1926, and is one of six clubs, including AEK Athens, PAOK, Panathinaikos, Aris Thessaloniki and Olympiacos, never to have been relegated from the league until 1990. They have also been involved in international football playing a number of friendlies against famous clubs such as Inter Milan, Galatasaray S.K., and Hungary national football team in the 1950s, and participated in the Balkans Cup on two occasions. They have had a turbulent recent history, and are currently competing in the fourth division Gamma Ethniki.

The 1994–95 Alpha Ethniki was the 59th season of the highest football league of Greece. The season began on 24 September 1994 and ended on 4 June 1995. Panathinaikos won their 17th Greek title and their first one in four years.

Rafik Zoheir Djebbour is an Algerian footballer who plays as a striker, most recently for Consolat and the Algeria national team.

Takis Lemonis is a Greek former footballer and current manager, most recently at the helm of Olympiacos. He is nicknamed "Sir Takis" due to his memorable performances at European competitions as a manager of Olympiacos and he is an all-time favourite of the fans.

Christos Kontis is a Greek former professional footballer who finished his career playing for APOEL as a defender.

AEK Athens F.C., as one of the most famous association football clubs, as one of the biggest clubs and the most historical club in Greece, has a long, unique and idiosyncratic history, and has experienced both the highs and the lows of the game. It won its first championship in 1939 and has gone on to become one of Greece's most successful football teams.

The 2011–12 season was Olympiacos's' 53rd consecutive season in the Super League Greece.