Michel Després (born October 14, 1957 in Quebec City, Quebec) is an administrator, consultant and a former Quebec politician. He was the former MNA member of the former riding of Limoilou from 1985 to 1994 and 1998 to 2003 and the former member of the riding of Jean-Lesage from 2003 and 2007 when he was defeated. He represented the Quebec Liberal Party during all his political career.

Després studied at the Université Laval and obtained a bachelor's degree in business administration in 1982. He would become the director of the Fishing Industry Association of Quebec.

Després jumped into politics in 1985 and became the new MNA for the Quebec City riding of Limoulou as the Liberal Party led by Robert Bourassa defeated the Parti Québécois. He would be re-elected in 1989 before temporarily halting his political career prior to the 1994 elections. Between 1994 and 1998 he was a consultant in management and a councilor at the Department of Canadian Heritage.

He would seek another election in 1998 reclaiming the riding of Limoilou before winning again in Jean-Lesage in 2003. While he had been a backbencher MNA during the two mandates of Robert Bourassa, Després had a larger role in the first mandate of Jean Charest, who nominated him as the Minister of Labor. Despres would adopted Bill 31 which introduced subcontracting in the public sector. The bill was met with opposition by most of its employees and was staged a one-day strike in 2003. The bill would be reinforced in mid-December 2003 as a special law which was voted in favor by the Liberal majority government.

Following a cabinet shuffle in 2005, Després was named the Transport Minister as well as the Minister of the Capitale-Nationale (Quebec) region. In 2007, he announced a significant increase of fundings on building or upgrading new highways as well as the reconstruction of bridges, roads and overpasses in the light of the Concorde Overpass collapse in 2006. In his region, he was unable to keep the Quebec Zoo Park opened due to financial difficulties and failed to open a new mini-zoo that would have replaced the former touristic site.

Després lost his seat in the 2007 elections when the Action démocratique du Québec won most of the seats in the region and caused the Liberals to lose its majority government status.

Jean Lesage, was a Canadian lawyer and politician from Quebec. He served as the 19th premier of Quebec from 22 June 1960 to 16 June 1966. Alongside Georges-Émile Lapalme, René Lévesque and others, he is often viewed as the father of the Quiet Revolution. Quebec City International Airport was officially named in his honour on 31 March 1994, and a provincial electoral district, Jean-Lesage, was named for him, as well.

Monique Gagnon-Tremblay is a politician in Quebec, Canada. She was the MNA for the riding of Saint-François in the Estrie region from 1985 to 2012. She served as Liberal leader of the Opposition in the National Assembly of Quebec from May 1998 to December 1998 and Deputy Premier in 1994 and from 2003 to 2005. Gagnon-Tremblay has been the member of the National Assembly for Saint-François since December 1985.

Christian Simard is a Canadian politician. He is the brother of MNA Sylvain Simard.

Yvan Bordeleau was the Member of the National Assembly (MNA) Quebec, Canada, for the Montreal provincial electoral district of Acadie from 1989 to 2007.

Jean-Pierre Charbonneau is a journalist and a former Quebec politician. He was the Quebec MNA member under the Parti Québécois for the provincial ridings of Borduas and Verchères in the Montérégie region.

Roch Cholette is a public accountant and a former municipal and provincial politician in Quebec, Canada.

Julie Boulet is a Canadian politician. Boulet is the current Member of National Assembly for the Quebec riding of Laviolette in the Mauricie region. A member of the Quebec Liberal Party, she was Minister of Transports (2007-2010) and Minister of Employment and Social Solidarity (2010-2012) in the Charest government. 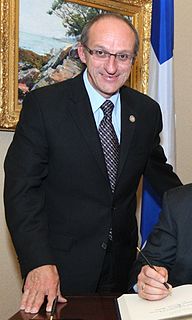 Yvon Vallières is a Quebec politician and teacher. He was a Member of National Assembly of Quebec for the riding of Richmond in the Estrie region from 1973 to 1976 and from 1981 to 2012. Formerly the Minister of Agriculture, Fisheries and Food from 2003 to 2007, he is the current Chair of the Government Caucus. He was a member of the Quebec Liberal Party.

Henri-François Gautrin is a Quebec politician, professor and physicist. He was the Member of National Assembly of Quebec for the riding of Verdun in the Montreal region. He represented the Quebec Liberal Party and was the former Minister of Governmental Services from February 2006 to February 2007.

Tony Tomassi is a Quebec politician. He is the former Member of National Assembly of Quebec for the riding of LaFontaine in Montreal. He formerly represented the Quebec Liberal Party and was the Minister for Family, but was an independent until May 3, 2012, date of his resignation.

Limoilou was a former provincial electoral district in Quebec, Canada. It was located in the general area of the city of Limoilou.

Marc-Yvan Côté is a former Quebec politician and Cabinet Minister for the Quebec Liberal Party. He was the Health and Social Services Minister in the Robert Bourassa government from 1989 to 1994.

Paul Bégin is a former Quebec politician and Cabinet Minister. Member of the Parti Québecois, he served as the province's Justice Minister from 1994 to 1997 and from 2001 to 2002.

The 36th National Assembly of Quebec was the provincial legislature in Quebec, Canada that was elected in the 1998 Quebec general election and sat from March 2, 1999, to March 9, 2001, and from March 22, 2001, to March 12, 2003. The Parti Québécois was the governing party with premiers Lucien Bouchard and Bernard Landry.

William Cusano was an Italian-born former politician in Quebec, Canada. He was a member of the National Assembly of Quebec from 1981 to 2007.

Jean-François Simard is a teacher and Quebec provincial politician and Cabinet Minister. He was the a member of the National Assembly of Quebec (MNA) for the riding of Montmorency from 1998 to 2003. Representing the Parti Québécois, he was a delegate minister for over a year in the Cabinet of Ministers of former Quebec Premier Bernard Landry.

Michel Rivard is a Canadian politician, former senator, and former member of the National Assembly of Quebec.

Robert LeSage is a Canadian retired politician and civil servant. He served in the National Assembly of Quebec from 1989 to 1998 as a member of the Liberal Party. His name is sometimes given as Lesage.