Michel Gustave Édouard Mayor (French pronunciation: ​ [miʃɛl majɔʁ] ; born 12 January 1942) [1] is a Swiss astrophysicist and professor emeritus at the University of Geneva's Department of Astronomy. [2] He formally retired in 2007, but remains active as a researcher at the Observatory of Geneva. He is co-laureate of the 2019 Nobel Prize in Physics along with Jim Peebles and Didier Queloz, [3] and the winner of the 2010 Viktor Ambartsumian International Prize [4] and the 2015 Kyoto Prize.

Together with Didier Queloz in 1995, he discovered 51 Pegasi b, the first extrasolar planet orbiting a sun-like star, 51 Pegasi. [5] For this achievement, they were awarded the 2019 Nobel Prize in Physics "for the discovery of an exoplanet orbiting a solar-type star". [6] Related to the discovery, Mayor noted that humans will never migrate to such exoplanets since they are "much, much too far away ... [and would take] hundreds of millions of days using the means we have available today". [7] However, due to discoveries by Mayor, searching for extraterrestrial communications from exoplanets may now be a more practical consideration than thought earlier. [8]

This research led to various fields of interest, including the study of statistical characteristics of solar-type binary stars. With fellow researcher Antoine Duquennoy, they examined the radial velocities of several systems believed to be binary stars in 1991. Their results found that a subset of these may in fact be single star systems with substellar secondary objects. [12] Desiring more accurate radial velocity measurements, Mayor, along with Baranne at Marseille, and with graduate student Didier Queloz, developed ELODIE, a new spectrograph based on the work of CORAVEL, which was estimated to have an accuracy of 15 m/s for bright stars, improving upon the 1 km/s from CORAVEL. ELODIE was developed with the specific intent to determine if the substellar secondary objects were brown dwarf stars or potentially giant planets. [13]

By 1994, ELODIE was operational at Geneva and Mayor and Queloz began their survey of Sun-like systems with suspected substellar secondary objects. [14] In July 1995, the pair's survey of the 51 Pegasi affirmed that there was an exoplanet orbiting it, identified as 51 Pegasi b which was later classified as a Hot Jupiter-type planet. This was the first exoplanet to be found orbiting a main sequence star, as opposed to planets that orbited the remains of a star. [15] Mayor's and Queloz's discovery of an exoplanet launched great interest is searching for other exoplanets since. [16] As of 2019, there are at least 4000 confirmed exoplanet discoveries with several more potential candidates. [17]

Mayor's work focused more on improving instrumentation for radial velocity measurements to improve detecting exoplanets and measuring their properties. Mayor led a team to further improve ELODIE to increase velocity measurement accuracy to 1 m/s via the High Accuracy Radial Velocity Planet Searcher (HARPS) installed on the ESO 3.6 m Telescope at La Silla Observatory in Chile by 2003. [18] Mayor led the team that used HARPS to seek out other exoplanets. In 2007, Mayor was one of 11 European scientists who discovered Gliese 581c, the first extrasolar planet in a star's habitable zone, from the ESO telescope. [19] In 2009, Mayor and his team discovered the lightest exoplanet ever detected around a main sequence star: Gliese 581e. [20] Nonetheless, Mayor noted that humans will never migrate to such exoplanets since they are "much, much too far away ... [and would take] hundreds of millions of days using the means we have available today". [7] However, due to discoveries by Mayor, searching for extraterrestrial communications from exoplanets may now be a more practical consideration than thought earlier. [8]

In 1998, Mayor was awarded the Swiss Marcel Benoist Prize [1] in recognition of his work and its significance for human life. As of 2003, he was a member of the board of trustees. He received the Prix Jules Janssen from the Société astronomique de France (French Astronomical Society) in 1998. [21]

In 2000, he was awarded the Balzan Prize. [1] Four years later, he was awarded the Albert Einstein Medal. [1] In 2005, he received the Shaw Prize in Astronomy, along with American astrophysicist Geoffrey Marcy. [22] Mayor was made a knight of the French Legion d'Honneur in 2004. [23]

Mayor has received the 2011 BBVA Foundation Frontiers of Knowledge Award of Basic Sciences (together with his former student Didier Queloz) for developing new astronomical instruments and experimental techniques that led to the first observation of planets around Sun-like stars. [24] Asteroid 125076 Michelmayor, discovered by Swiss amateur astronomer Michel Ory at the Jura Observatory in 2001, was named in his honor. [2] The official naming citation was published by the Minor Planet Center on 21 August 2013 ( M.P.C. 84674). [25]

In 2015, he was awarded the Gold Medal of the Royal Astronomical Society. [26] In 2017, he received the Wolf Prize in Physics. [27] He and Didier Queloz (also from Switzerland) were awarded one half of the 2019 Nobel Prize in Physics for the discovery of the exoplanet 51 Pegasi b. [28] 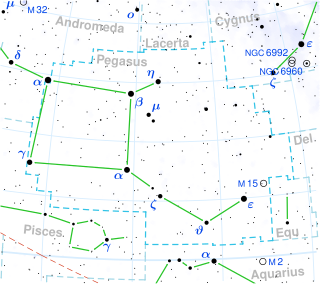 51 Pegasi, formally named Helvetios, is a Sun-like star located 50.45 light-years from Earth in the constellation of Pegasus. It was the first main-sequence star found to have an exoplanet orbiting it. 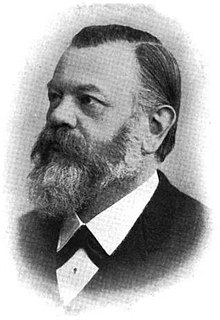 Hermann Carl Vogel was a German astrophysicist. He was born in Leipzig, Kingdom of Saxony. From 1882 to 1907 he was director of the Astrophysical Observatory, Potsdam. He made extensive discoveries using spectral analysis of the stars.

Didier Patrick Queloz is a Swiss astronomer. He is a Jacksonian Professor of Natural Philosophy at the University of Cambridge, where he is also a fellow of Trinity College, Cambridge, as well as a professor at the University of Geneva. Together with Michel Mayor in 1995, he discovered 51 Pegasi b, the first extrasolar planet orbiting a sun-like star, 51 Pegasi. For this discovery, he shared the 2019 Nobel Prize in Physics with James Peebles and Michel Mayor. He is designate director of the new Center for the Origin and Prevalence of Life at ETH Zurich.

The High Accuracy Radial Velocity Planet Searcher (HARPS) is a high-precision echelle planet-finding spectrograph installed in 2002 on the ESO's 3.6m telescope at La Silla Observatory in Chile. The first light was achieved in February 2003. HARPS has discovered over 130 exoplanets to date, with the first one in 2004, making it the most successful planet finder behind the Kepler space observatory. It is a second-generation radial-velocity spectrograph, based on experience with the ELODIE and CORALIE instruments.

ELODIE was an echelle type spectrograph installed at the Observatoire de Haute-Provence 1.93m reflector in south-eastern France for the Northern Extrasolar Planet Search. Its optical instrumentation was developed by André Baranne from the Marseille Observatory. The purpose of this instrument was extrasolar planet detection by the radial velocity method. This instrument was also used for the M-Dwarf Programmes.

14 Herculis b or 14 Her b is an exoplanet approximately 58.5 light-years away in the constellation of Hercules. The planet was found orbiting the star 14 Herculis, with a mass that would likely make the planet a Jovian planet roughly the same size as Jupiter but much more massive. It was discovered in July 1998 by the Geneva Extrasolar Planet Search team. At the time of discovery it was the extrasolar planet with the longest orbital period, though longer-period planets have subsequently been discovered.

Stéphane Udry is an astronomer at the Geneva Observatory in Switzerland, whose current work is primarily the search for extra-solar planets. He and his team, in 2007, discovered a possibly terrestrial planet in the habitable zone of the Gliese 581 planetary system, approximately 20 light years away in the constellation Libra. He also led the observational team that discovered HD 85512 b, another most promisingly habitable exoplanet.

Doppler spectroscopy is an indirect method for finding extrasolar planets and brown dwarfs from radial-velocity measurements via observation of Doppler shifts in the spectrum of the planet's parent star.

The Geneva Extrasolar Planet Search is a variety of observational programs run by the Geneva Observatory at Versoix, a small town near Geneva, Switzerland. The programs are executed by M. Mayor, D. Naef, F. Pepe, D. Queloz, N.C. Santos, and S. Udry using several telescopes and instruments in the Northern and Southern Hemisphere and have resulted in the discovery of numerous extrasolar planets, including 51 Pegasi b, the first ever confirmed exoplanet orbiting a main-sequence star.

HD 8574 b is an extrasolar planet discovered in 2001 by a team of European astronomers using Doppler spectroscopy as part of the ELODIE Planet Search Survey, and was published in a paper with five other planets. HD 8574 b is in the orbit of host star HD 8574. The planet is at most two times the mass of Jupiter, orbiting every 227 days at three quarters of the distance between the Earth and Sun. HD 8574 b has a very elliptical orbit, far more than that of Jupiter.

Gliese 86 b, sometimes referred to as Gliese 86 A b and or shortened to Gl 86 b, is an extrasolar planet approximately 35 light-years away in the constellation of Eridanus. The planet was discovered orbiting a K-type main-sequence star by French scientists in November 1998. The planet orbits very close to the star, completing an orbit in 15.78 days.

HD 80606 b is an eccentric and hot Jupiter 190 light-years from the Sun in the constellation of Ursa Major. HD 80606 b was discovered orbiting the star HD 80606 in April 2001 by a team led by Michel Mayor and Didier Queloz. With a mass 4 times that of Jupiter, it is a gas giant. Because the planet transits the host star its radius can be determined using the transit method and was found to be slightly smaller than Jupiter's. Its density is slightly less than Earth's. It has an extremely eccentric orbit like a comet, with its orbit taking it very close to its star and then back out very far away from it every 111 days.

HD 40307 b is an extrasolar planet orbiting the star HD 40307, located 42 light-years away in the direction of the southern constellation Pictor. The planet was discovered by the radial velocity method, using the European Southern Observatory's HARPS apparatus, in June 2008. It is the second smallest of the planets orbiting the star, after HD 40307 e. The planet is of interest as this star has relatively low metallicity, supporting a hypothesis that different metallicities in protostars determine what kind of planets they will form.

HD 40307 c is an extrasolar planet orbiting the star HD 40307, located 42 light-years away in the direction of the southern constellation Pictor. The planet was discovered by the radial velocity method, using the HARPS apparatus, in June 2008. Of the six proposed planets in the HD 40307 star system, it is the third-largest, and has the second-closest orbit from the star. The planet is of interest as this star has relatively low metallicity, supporting a hypothesis that different metallicities in protostars determine what kind of planets they will form.

The Geneva Observatory is an astronomical observatory at Sauverny (CH) in the municipality of Versoix, Canton of Geneva, in Switzerland. It shares its buildings with the astronomy department of the École Polytechnique Fédérale de Lausanne. It has been active in discovering exoplanets, in stellar photometry, modelling stellar evolution, and has been involved in the European Space Agency's Hipparcos, INTEGRAL, Gaia, and Planck missions.

Leonhard Euler Telescope, or the Swiss EULER Telescope, is a national, fully automatic 1.2-metre (47 in) reflecting telescope, built and operated by the Geneva Observatory. It is located at an altitude of 2,375 m (7,792 ft) at ESO's La Silla Observatory site in the Chilean Norte Chico region, about 460 kilometers north of Santiago de Chile. The telescope, which saw its first light on 12 April 1998, is named after Swiss mathematician Leonhard Paul Euler.

51 Pegasi b, unofficially dubbed Bellerophon, later formally named Dimidium, is an extrasolar planet approximately 50 light-years away in the constellation of Pegasus. It was the first exoplanet to be discovered orbiting a main-sequence star, the Sun-like 51 Pegasi, and marked a breakthrough in astronomical research. It is the prototype for a class of planets called hot Jupiters. 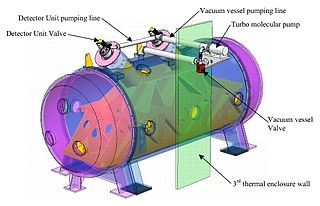 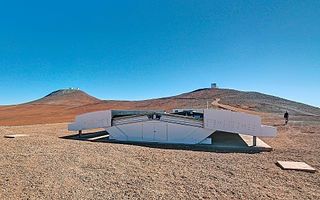 The Next-Generation Transit Survey (NGTS) is a ground-based robotic search for exoplanets. The facility is located at Paranal Observatory in the Atacama desert in northern Chile, about 2 km from ESO's Very Large Telescope and 0.5 km from the VISTA Survey Telescope. Science operations began in early 2015. The astronomical survey is managed by a consortium of seven European universities and other academic institutions from Chile, Germany, Switzerland, and the United Kingdom. Prototypes of the array were tested in 2009 and 2010 on La Palma, and from 2012 to 2014 at Geneva Observatory.