Mike Speight (born 1 November 1951, Upton, West Yorkshire) is an English former footballer who had a long spell with Sheffield United and later had a five–month caretaker manager stint at Chester City in 1984–85.

A midfielder, Speight made 199 Football League appearances for Sheffield United after signing full professional forms in 1969. One of the highlights of this spell was being part of the England B side on their tour of Asia and Oceania. [1] He left after a testimonial in 1980 for Blackburn Rovers for a reported £60,000, having rejected the chance to join Bobby Robson's Ipswich Town side two years earlier. [2] He made 51 league appearances for Rovers before moving on to Grimsby Town in the summer of 1982. After a further 40 league appearances, Speight moved on again two years later.

He retired as a player in Moss in November 1994.

In August 1984 Speight joined Chester as player–coach as he sought to achieve his ambition of managing a Football League club by the age of 35. [1] The sacking of manager John McGrath four months later meant Speight achieved his ambition as he became caretaker–manager, a role he held until the end of the season. Speight instilled new belief in the side as it pulled away from the bottom of Division Four, with new signing Stuart Rimmer from Everton proving a prolific capture.

Despite the impressive run of results, Speight had to stand aside in July 1985 when former Wigan Athletic manager Harry McNally was appointed the new Chester boss. Speight had earlier in the year been announced as manager, [3] but he had not signed a contract and had been openly critical of the way the club operated, saying it was "run on an amateur level right through the place". [3]

Speight continued playing for the club in the early weeks of the 1985–86 season but he began looking for new opportunities and took up a management post in Norway midway through the campaign, after a brief spell with Rhyl. He spent the late 1980s and early 1990s as a playing manager in several Norwegian clubs.

He still lives in Norway, where he has been head coach at several clubs, including Sogndal, [4] Moss, [5] Sprint/Jeløy and Mjøndalen. On 23 November 2007, he was appointed offensive coach at Vålerenga.

Ryan Thomas Lowe is an English football manager and former professional player, who is the current manager of League One club Plymouth Argyle. His playing career, as a striker, began at Burscough in 1999 and he became a Football League player with Shrewsbury Town the following year. He played for eight league clubs in all and had three spells at Bury. In the second half of the 2010–11 season, Lowe established a Bury club record by scoring a goal in each of nine consecutive league games.

Neil John Ashton is an English semi-professional footballer who plays for Cefn Druids. He typically plays as left-back, but occasionally acts as a midfielder. 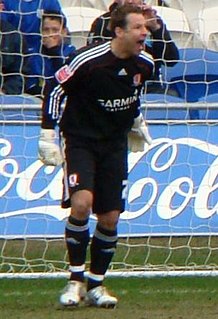 Philip Lee Jones is a Welsh football coach and former player who played as a forward.

Harry McNally was an English football player, coach and manager, noted for his spells as manager of Wigan Athletic and Chester City.

Marlon Charles Broomes is an English former professional footballer who played as a centre-back from 1994 to 2012.

Gregg Steven Blundell is an English retired footballer who played as a striker. He is now a physiotherapist for Liverpool Prior to his appointment at Tranmere he combined playing football and being the club's physiotherapist at Barrow AFC in the Conference National.

Paul Andrew Carden is an English former professional footballer and coach, who is currently manager at Warrington Town. While playing at Cambridge United, Carden was also the club's assistant manager. He previously played for Blackpool, Rochdale, Chester City, Doncaster Rovers, Peterborough United, Accrington Stanley, and Burton Albion. He was a player and coach at Luton Town before leaving in January 2013, and was manager of Southport between January and November 2015.

Trevor Storton was an English footballer who played as a central defender.

Steven Henry Mungall is a Scottish football player and manager.

Edward Michael Bishop is an English former professional footballer who played as a midfielder. He played in the Football League in England for Tranmere Rovers, Chester City and Crewe Alexandra and also played and managed in non-league football. He is the elder brother of comedian John Bishop.

Thomas John Jones was a Welsh footballer. Although he began his career in Wales, he is best known for the time he spent as a player in the English Football League.

Jake Ashley Cassidy is a Welsh professional footballer who plays as a forward for York City. He has represented Wales at both under 19 and under 21 levels.