Last updated May 23, 2020
Not to be confused with Middle Ground Rock or Middle Cathedral Rock.

The Middle Rocks (Malay : Batuan Tengah; Chinese :中岩礁) are two uninhabited small rocks separated by 250 metres (820 ft) of open water at the eastern opening of the Strait of Singapore on the western edge of the South China Sea. The islands were disputed territory between Malaysia and Singapore (known as the Pedra Branca dispute) until, on 23 May 2008, the International Court of Justice decided that sovereignty over Middle Rocks belonged to Malaysia by 15 votes to one.

Following the decision, Singapore and Malaysia said they would hold discussions to establish the maritime border around the area. Both countries established the Malaysia-Singapore Joint Technical Committee (MSJTC) to implement the court's judgement. According to Malaysia, the MSJTC reached an impasse in November 2013. Malaysia clarified that one of the key reasons is that "the parties have been unable to agree over the meaning of the 2008 judgement as it concerns South Ledge and the waters surrounding Pedra Branca. [4]

Malaysia sent a team from its Mapping and Survey Department which constructed a flag pole, five markers and a monument between 4 and 12 June 2008. The Malaysian flag was raised and the team sang the Malaysian national anthem, Negaraku , during a ceremony which was covered by the press on 13 and 14 June 2008. [5]

Establishment of Abu Bakar Maritime Base

On 5 August 2017, Jane's Defence Weekly reported that Malaysia had established a new maritime installation, the Abu Bakar Maritime Base, on Middle Rocks, which consists of two clusters of rocks located 1 kilometre south of Pedra Branca (which was awarded to Singapore in the aftermath of the 2008 ICJ ruling) that Malaysia is currently challenging. [6]

The base, built across the eastern opening of the Strait of Singapore, comprises a 316-metre jetty, a helipad, and a lighthouse. According to the Sultan of Johor, the installation, which is a project under the auspices of the National Security Council, "is aimed at safeguarding Malaysia's sovereign territory and waters, and for conducting marine scientific research". The base also seeks to reaffirm "Malaysia's absolute sovereignty over the Middle Rocks". [6]

On 11 August, Malaysia deployed a missile-capable fast-attack craft Perdana to its new Maritime Base on the Middle Rocks. [7] Royal Malaysian Navy chief Admiral Ahmad Kamarulzaman Ahmad Badaruddin confirmed the deployment when he posted photographs of Perdana's arrival at the base. Photos posted by the Navy chief showed two armed guards on an observation deck, as well as a communications system fitted with surveillance equipment, as pointed out by Jane's Defence Weekly. [8] In late May 2018, Malaysia announcing their plan to convert Middle Rocks into an island. [9]

In announcing Malaysia's plans on the week of 2 Jun 2018, Dr Mahathir said: "We have already built features there on Middle Rocks. Our intention is to enlarge it so that we can form a small island for us. He added "That is something we are thinking of." When pressed to clarify Malaysia's plans, he said: "We haven't made a full decision yet." When asked about Malaysia's plans to expand Middle Rocks, a spokesman for Singapore's Ministry of Foreign Affairs said: “Sovereignty over Middle Rocks belongs to Malaysia. We have no comments on Malaysia’s activities on Middle Rocks as long as they are in accordance with international law.” [10] 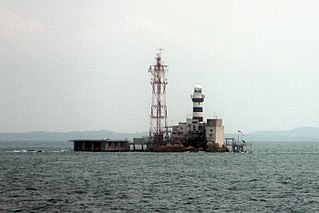 Pedra Branca is an outlying island and also the easternmost point of Singapore. The name means "white rock" in Portuguese, and refers to whitish guano deposited on the rock. The island consists of a small outcrop of granite rocks with an area of about 8,560 square metres (92,100 sq ft). During the low water spring tide it measures, at its longest, 137 metres (449 ft) and has an average width of 60 metres (200 ft). Pedra Branca is situated at 1°19′48″N104°24′27″E, where the Singapore Strait meets the South China Sea. 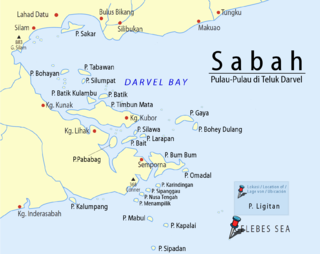 Ligitan is a small island in Tawau, Sabah, located east of the island of Borneo, in the Celebes Sea. In the past, the island was at the centre of a territorial dispute between Malaysia and Indonesia. The matter was brought for adjudication before the International Court of Justice and, at the end of 2002, the Court awarded the island along with the island of Sipadan to Malaysia, on the basis of the "effective occupation" displayed by the latter's predecessor and the absence of any other superior title. The Philippines had applied to intervene in the proceedings on the basis of its claim to Northern Borneo, but its request was turned down by the Court early in 2001.

Horsburgh Lighthouse is an active lighthouse which marks the eastern entrance to the Straits of Singapore. It is situated on the island of Pedra Branca. Singapore's earliest lighthouse by date of completion, it is located approximately 54 kilometres (34 mi) to the east of Singapore and 14 kilometres (8.7 mi) from the Malaysian state of Johor. 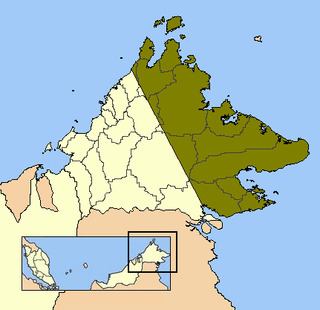 The North Borneo dispute, also known as the Sabah dispute, is the territorial dispute between Malaysia and the Philippines over much of the eastern part of the state of Sabah, a territory known as North Borneo prior to the formation of the Malaysian federation. The Philippines, presenting itself as the successor state of the Sultanate of Sulu, retains a "dormant claim" on Sabah on the basis that the territory was only leased to the British North Borneo Company in 1878, with the sovereignty of the Sultanate over the territory never having been relinquished. However, Malaysia considers this dispute as a "non-issue" as it interprets the 1878 agreement as that of cession and that it deems that the residents of Sabah had exercised their right to self-determination when they joined to form the Malaysian federation in 1963. 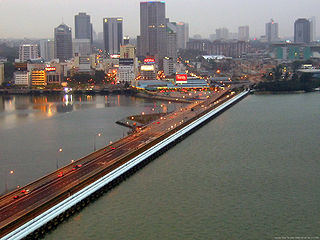 The Malaysia–Singapore border is an international maritime border between the Southeast Asian countries of Malaysia, which lies to the north of the border, and Singapore to the south. The boundary is formed by straight lines between maritime geographical coordinates running along or near the deepest channel of the Straits of Johor. 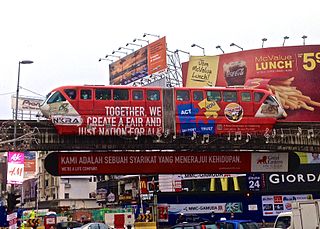 This article lists important figures and events in Malaysian public affairs during the year 2003, together with births and deaths of notable Malaysians.

The Philippines has claimed many territories throughout its history. These territories include the Spratly Islands, Sabah, Scarborough Shoal, Palmias (Miangas), Orchid Island, the Sangir Islands, the Marianas Islands, and the Caroline Islands. 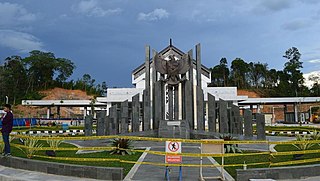 The border between the Southeast Asian countries of Indonesia and Malaysia separates the two countries' territories on the island of Borneo and also includes maritime boundaries along the length of the Straits of Malacca, in the South China Sea and in the Celebes Sea. 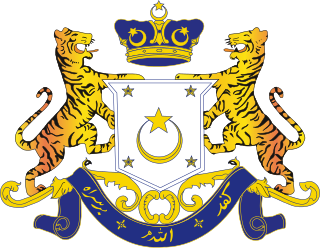 Merambong Island is an uninhabited island located in Pontian District, Johor, Malaysia on the Straits of Johor. The island is dominated by mangrove swamp. 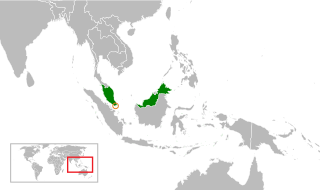 Malaysia–Singapore relations refers to the bilateral foreign relations between the two countries Malaysia and Singapore, after the separation of Singapore from Malaysia in 1965. Singapore has a high commission in Kuala Lumpur and a consulate general in Johor Bahru, while Malaysia has a high commission in Singapore. Both countries are full members of the Commonwealth of Nations and ASEAN. Ties between the two countries remain intact despite several diplomatic issues that have arisen.

Johor, formerly known as Johore, is a state of Malaysia in the south of the Malay Peninsula. Johor has land borders with the Malaysian states of Pahang to the north and Malacca and Negeri Sembilan to the northwest. Johor shares maritime borders with Singapore to the south and Indonesia to both the west and east. Johor Bahru is the capital city and the economic centre of the state, Kota Iskandar is the seat of the state government, and Muar serves as the royal town of the state. The old state capital is Johor Lama. As of 2017, the state's population is 3,700,000. Johor has highly diverse tropical rainforests and an equatorial climate. The state's mountain ranges form part of the Titiwangsa Range, which is part of the larger Tenasserim Range connected to Thailand and Myanmar, with Mount Ophir being the highest point in Johor. 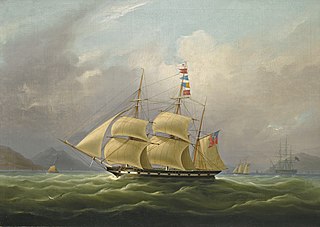 Sylph was a clipper ship built at Sulkea, opposite Calcutta, in 1831 for the Parsi merchant Rustomjee Cowasjee. After her purchase by the Hong Kong-based merchant house Jardine Matheson, in 1833 Sylph went on to set an unbroken speed record by sailing from Calcutta to Macao in 17 days, 17 hours. Her primary role was to transport opium between various ports in the Far East. She disappeared en route to Singapore in 1849.

The borders of Indonesia include land and maritime borders with Malaysia, Papua New Guinea, and Timor Leste, as well as shared maritime boundaries with Australia, India, Palau, Philippines, Singapore, Thailand, and Vietnam.