Young was born in Shreveport, Louisiana, moving to Milwaukee in about 1945. [3] He was an amateur boxer in the 1940s, but he later recalled that "It was nothing to write home about... I decided that music was the best thing to do." [4] He began his music career in the early 1950s, singing on the Milwaukee nightclub circuit and taking his stage name after the film of the same name. In 1955, he returned to Louisiana to make his recording debut, for Jiffy Records. [5]

He then moved to Chicago, where he worked as a sideman, [6] notably with Joe Little & his Heart Breakers and later Billy Boy Arnold. [2] After recording "Why Baby" / "Empty Arms" for Bobby Robinson's Fire Records in 1961, he performed with Otis Rush in the early 1960s, playing on Rush's album Cold Day in Hell. He also continued to record under his own name for small labels such as Webcor, Celtex, and Jacklyn. [2] He played on Magic Sam's albums West Side Soul and Black Magic [6] [7] and also worked with Jimmy Rogers, Willie Dixon, [6] Tyrone Davis and Jimmy Dawkins. [2]

Young's album Blues with a Touch of Soul was released by Delmark Records in 1971, [6] and two further albums followed on the Ovation label in the mid-1970s. [2]

Young regularly performed in the 1970s and 1980s at the Wise Fools Pub in Chicago. [2] His song "Turning Point" was used in the feature film Thief (1981), directed by Michael Mann.

In 1986 he began work on an album, eventually released in 1997 as Mighty Man. After he underwent surgery on a pinched nerve in his neck, he developed numbness in his fingers, which affected his ability to play guitar. In 1998, he underwent further surgery on his spine in an attempt to regain feeling in his fingers, but he died at the age of 71 after developing pneumonia. [4]

Young's mid-1970s Ovation LPs were said by AllMusic's Bill Dahl to have "showcased the guitarist's blues-soul synthesis". [2] Reviewing Young's 1976 self-titled LP in Christgau's Record Guide: Rock Albums of the Seventies (1981), Robert Christgau wrote: "If Young's voice weren't as gruffly workaday as his guitar, he might be a threat—he's got a knack for the blues subject, from mama-in-law to barbecue to what money can buy. Even with the stupid string synthesizer butting in, this is a solid, coverable groove album." [8]

Joe Simon is an American soul and R&B musician. He began as a Gospel artist singing with the Golden West Singers in the Bay Area in California. A consistent presence on the US charts between 1964 and 1981, Simon charted 51 U.S. Pop and R&B chart hits between 1964 and 1981, including eight times in the US top forty, thirty-eight times in the top 40 of the US R&B charts, and 13 chart hits in Canada. His biggest hits included three number one entries on the US Billboard R&B chart: "The Chokin' Kind" (1969), "Power of Love" (1972), and "Get Down, Get Down " (1975). 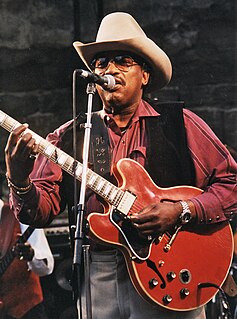 Amos Leon Thomas Jr., known professionally as Leon Thomas, was an American jazz and blues vocalist, born in East St. Louis, Illinois, and known for his bellowing glottal-stop style of free jazz singing in the late 1960s and 1970s. 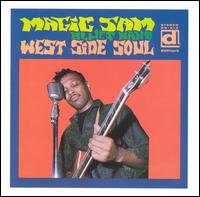 West Side Soul is the debut studio album by Chicago blues musician Magic Sam. Released by Delmark Records in 1968, it is often cited as one of the key modern electric blues albums. The album includes a re-recording of Magic Sam's first Cobra Records single, "All Your Love" (1957), and an updated "Sweet Home Chicago", which became a popular blues anthem.

James Henry “Jimmy” Dawkins was an American Chicago blues and electric blues guitarist and singer. He is generally considered to have been a practitioner of the "West Side sound" of Chicago blues.

Sylvester "Syl" Johnson is an American blues and soul singer and record producer. 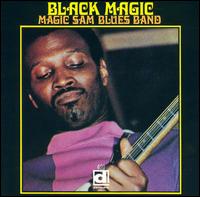 Black Magic is a studio album by Chicago blues musician Magic Sam. Delmark Records released it under the name of "Magic Sam Blues Band" in November 1969, shortly before his death. The album was a follow-up to Magic Sam's highly influential studio debut, West Side Soul (1968), and also includes a mix of originals with songs written by his contemporaries. 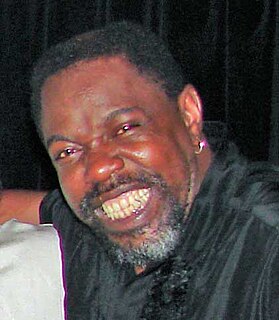 Eddie C. Campbell was an American blues guitarist and singer in the Chicago blues scene. 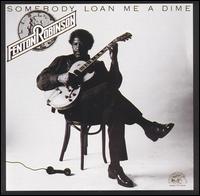 Somebody Loan Me a Dime is a 1974 studio album by blues singer and guitarist Fenton Robinson, his debut under the Alligator Records imprint. Blending together some elements of jazz with Chicago blues and Texas blues, the album was largely critically well received and is regarded as important within his discography. Among the album's tracks is a re-recording of his 1967 signature song, "Somebody Loan Me a Dime". It has been reissued multiple times in the United States and Japan, including with bonus tracks.

Dave Specter is an American Chicago blues and jazz guitarist. 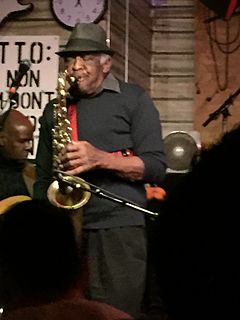 Eddie Shaw was an American Chicago blues tenor saxophonist, arranger and bandleader. He led Howlin' Wolf's band, the Wolf Gang, from 1972, both before Wolf's death in 1976 and subsequently. 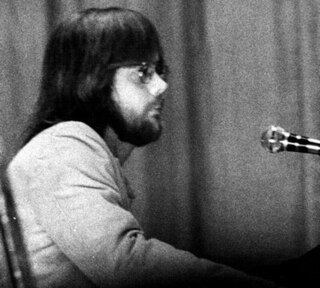 Ken Saydak is an American Chicago blues pianist and singer-songwriter. In a long career, he has played as a sideman with Lonnie Brooks, Mighty Joe Young, Johnny Winter and Dave Specter. Saydak has released three albums under his own name since 1999. Billboard once described him as "a gripping frontman". 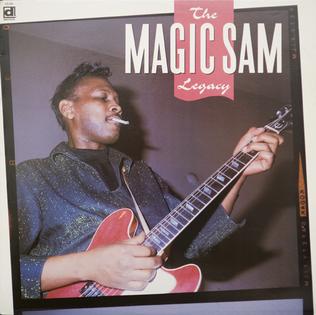 The Magic Sam Legacy is a compilation of unreleased tracks by the American blues musician Magic Sam, recorded in Chicago between 1966 and 1968, that was released by the Delmark label in 1989. 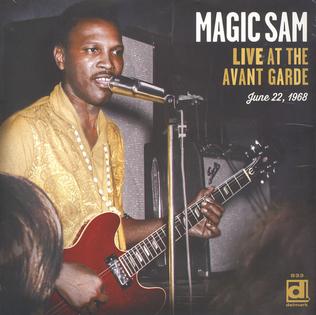 Live at the Avant Garde is a live album by the American blues musician Magic Sam, compiling tracks recorded in Milwaukee in 1968, that was released by the Delmark label in 2013.