Miha Zupan (born September 13, 1982) is a Slovenian former professional basketball player. He played among hearing players at the highest level in Europe, despite being deaf since birth. He is a 2.05 m (6 ft 8¾ in) power forward who can also play center when needed. He is the only deaf person to play in professional basketball league and in the EuroCup. [1] Miha Zupan has competed at the Deaflympics on 5 occasions from 1997-2017. [2]

Zupan spent most of his childhood in a special school for the deaf, eventually learning to speak. A type of hearing aid would later give him enough hearing to understand speech. He did not learn to play basketball until age 14, instead playing football and volleyball. After his first basketball coach spotted him in a schoolyard, he took to the game quickly, soon joining Slovenia's national basketball team for the deaf, which twice made the finals of the European championships with Zupan as its star. He was selected to represent Slovenia at the Deaflympics in 1997 and competed in his maiden Deaflympic competition at the age of 15. He was part of the Slovenian deaf basketball team which finished 5th in the 1997 Summer Deaflympics. [3] At the age of 17, he signed his first contract with a regular professional team, KD Slovan of Ljubljana. During his teenage years, he grew 20 cm (8 inches) in an 18-month period, leading to knee problems that sidelined him for several months early in his pro career. [4]

At Slovan he developed into a promising big man, soon making the (regular) Slovenia junior and under-20 national teams. He played in the Slovenian League All-Star Game in 2004 and 2006, earning MVP honors in the 2004 game and also winning the slam dunk contest associated with the 2004 game. He continued to play for the Slovenia national deaf team, leading them to the 2004 European championship. [5]

In the 2005-06 season with Slovan, he averaged 11.5 points and 4.4 rebounds in Slovenian League play. His statistics in the Adriatic League were arguably more impressive, considering that he played only 23 minutes per game in that competition; he averaged 13.2 points and 3.9 rebounds and also shot 47.3% from three-point range. [8]

Zupan signed with Union Olimpija, also of Ljubljana, in the 2006 offseason, fulfilling what he called one of his lifelong dreams. He also barely missed out on a trip to the 2006 FIBA World Championship, becoming the last player cut from the Slovenia squad. [4] His chance to play for Olimpija in the Euroleague was on hold for several months because his transfer became the subject of litigation between them and Slovan. He had, apparently inadvertently, failed to revoke his contract with Slovan before signing with Olimpija. Olimpija had registered him at the start of the 2006-07 season, and he played six fixtures in the Adriatic League before Slovan contested the registration. [9] Olimpija won the first round of the legal battle in August 2006, but on October 23, an appellate court set aside the decision and ordered a new trial. Olimpija announced that it would appeal the ruling. [10] This ruling also, for the time being, prevented him from becoming the first deaf player ever to play in the Euroleague, as he had been scheduled to play in Olimpija's first game of Euroleague regular-season play against Croatian side Cibona on October 26, 2006. [11]

The legal battle raged until late February 2007, when Olimpija and Slovan reached a settlement. After Olimpija paid an undisclosed fee to Slovan, they finally registered him officially on March 1. The settlement proved timely for Olimpija, as they had seen six players leave the team during the season, and had two other players out with injury. While Zupan was unable to play during the 2006-07 Euroleague, as Olimpija had been eliminated by the time of the settlement, he arrived in time for the late rounds of the Adriatic League and for the second stage of the Slovenian domestic league. [9]

On October 24, 2007, Zupan finally became the first deaf player in the Euroleague, [12] appearing for Olimpija in their 80-52 loss at Montepaschi Siena in the opening week of regular season play in the 2007-08 Euroleague. He had 5 points, 3 rebounds, and 2 assists in slightly over 13 minutes of action off the bench. [13]

In July 2010 he signed a two-year deal with Spartak SPB in Russia. [15] In the same year, he was awarded the ICSD Deaf Sportsman of the Year by the International Committee of Sports for the Deaf as he topped the list with 60 points. [16]

The ABA League, renamed to the ABA League First Division in 2017, is the 1st-tier regional men's professional basketball league that originally featured clubs from the former Yugoslavia. Due to sponsorship reasons, the league was also known as the Goodyear League from 2001 to 2006, and as the NLB League from 2006 to 2011.

Erazem Lorbek is a Slovenian former professional basketball player. At a height of 6 ft 10 3⁄4 in (2.10 m) tall, he primarily played at the power forward position, but he was also capable of playing at the center position. A three-time All-EuroLeague Team member, he won the EuroLeague title with FC Barcelona in 2010.

Radoslav "Rašo" Nesterović, often referred to in English as Radoslav "Rasho" Nesterović, is a Slovenian former professional basketball player. He holds citizenship in both Slovenia and Greece. During his career in the NBA, Nesterović played for the Minnesota Timberwolves, San Antonio Spurs, Indiana Pacers, and Toronto Raptors. He retired in 2011.

Košarkarski klub Olimpija was a men's professional basketball club based in Ljubljana, Slovenia.

Yotam Halperin is an Israeli former professional basketball player. He is currently the Sporting Director for Hapoel Jerusalem of the Israeli Premier League. He is a 1.93 m tall combo guard. He was named to the 2007–08 All-EuroLeague Second Team.

Zmago Sagadin is widely considered as the most successful Slovenian and top European basketball coach with 25 championship titles both on a national and international level, recognized 9 times as Slovenian Top Coach of the Year and recipient of many other honorary awards. 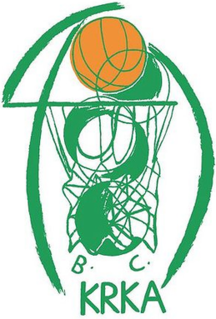 Košarkarski klub Krka, commonly referred to as KKK or simply Krka, is a professional basketball team based in Novo Mesto, Slovenia. The team competes in the Premier A Slovenian Basketball League and the ABA League. The team's home arena is Leon Štukelj Hall. The club is a founding member and shareholder of the Adriatic Basketball Association.

Gašper Vidmar is a Slovenian professional basketball player for Reyer Venezia of the Italian Lega Basket Serie A (LBA). He is 6 ft 11 in tall and plays the center position. 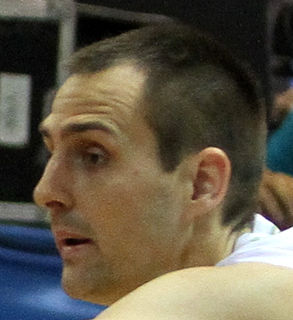 Domen Lorbek is a Slovenian professional basketball player who most recently played for Petrol Olimpija of the Adriatic League and the Slovenian League. He also represented the Slovenian national basketball team internationally. Standing at 1.99 m, he primarily plays the shooting guard position, but can also play as small forward. He is a younger brother of Erazem Lorbek.

Aleš Pipan is a Slovenian basketball coach and former basketball player, who is currently coach of Šentjur in the Liga Nova KBM.

Jurij "Jure" Zdovc is a Slovenian former professional basketball player and coach. He is the current head coach of Levallois Metropolitans, of the LNB Pro A. As a player, he was a 1.98 m (6'6") tall point guard, who began his professional playing career with the Yugoslav Second Division club Smelt Olimpija.

Mirza Begić is a retired Bosnian-born Slovenian professional basketball player. The 2.16 m center, he represented the Slovenian national team in the international competitions.

Deaf basketball is basketball played by deaf people. Sign language is used to communicate whistle blows and communication between players.

Jasmin Hukić is a Bosnian retired professional basketball player who last played for Ilirija of the Slovenian League. He also represented the Bosnia and Herzegovina national basketball team. Standing at 2.04 m, he plays at the small forward and power forward positions.

Miha Lapornik is a Slovenian professional basketball player for Heroes Den Bosch of the Dutch Basketball League. He is a 1.94 m tall shooting guard.