Mikawa Bay (三河湾 Mikawa-wan) is a bay to the south of Aichi Prefecture, Japan, surrounded by Chita Peninsula to the west and Atsumi Peninsula to the east and south. Its area is approximately 604 km2. Pollution of the shallow, enclosed waters of the bay has become a concern in recent years.

Chita Peninsula is a peninsula to the south of Aichi Prefecture, central Honshū, Japan. It runs approximately north-south. To the west is Ise Bay, while to the east it encloses Mikawa Bay. It faces the Atsumi Peninsula southeast across Mikawa Bay. Chūbu Centrair International Airport is located off the west coast of the peninsula.

Funayūrei are spirits (yūrei) that have become vengeful ghosts (onryō) at sea. They have been passed down in the folklore of various areas of Japan. They frequently appear in ghost stories and miscellaneous writings from the Edo Period as well as in modern folk customs. In Yamaguchi Prefecture and Saga Prefecture, they are called Ayakashi.

Higashi-Biwajima Station is a railway station operated by Nagoya Railroad located in Nishi-ku, Nagoya, Aichi, Japan. This station is unmanned. 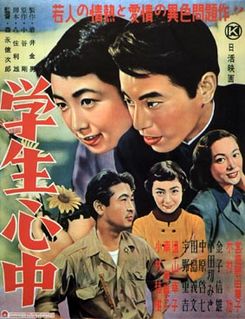 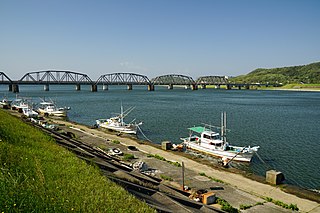 The Gōnokawa River is a river that runs through Hiroshima and Shimane prefectures in Japan. It is the largest river in the Chūgoku region. It is also called the Gōgawa River and, in Hiroshima, the Enokawa River.

Atsumi Peninsula is a peninsula in southern Aichi Prefecture, central Honshū, Japan. It has an approximate length of 50 kilometres (31 mi) east-west, separating Mikawa Bay from the Philippine Sea to the south, with Ise Bay lying to its west. It faces the Chita Peninsula, to the northwest, across the entrance to Mikawa Bay. It has a width ranging from 5 kilometres (3.1 mi) to 8 kilometres (5.0 mi), and its highest point is 328 metres (1,076 ft). Its total area is approximately 200 square kilometers.

Mikawa House is a historical building in Tokushima, Japan. It was designated an Important Cultural Property of Japan in 2007. 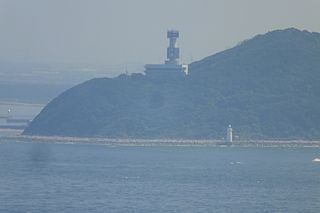 Cape Irago is the terminal point of land at the west end of Atsumi Peninsula in southern Aichi Prefecture, Japan. The cape forms one side of the entrances to Ise Bay and Mikawa Bay, which are divided by the Chita Peninsula. Because it is a crucial landmark for ships Irago Lighthouse is located in the cape to help guide and warn passing ships.

Side Pawn Capture Rapid Attack Bishop*33 is a variation stemming from the Side Pawn Capture opening, in which White drops their bishop to 33 after they first trade pawns on the eighth file and then trade the bishops after Black takes White's side pawn.

A gubernatorial election was held on 17 April 1963 to elect the Governor of Saga Prefecture. Incumbent Sunao Ikeda won the election uncontested.