Gillespie started his coaching career at the College of the Canyons, a California junior college. He started the school's baseball program in spring 1971 after the school's fall 1969 founding. In sixteen seasons as head coach, he had a 420–167 record. [3]

Gillespie also played baseball at USC under coach Rod Dedeaux, and was a member of the 1961 College World Series champions. Along with Jerry Kindall, he is one of only two individuals who have both played for and coached a College World Series champion. [5] He was succeeded as USC's head coach by Chad Kreuter, a former major league catcher who is married to Gillespie's daughter Kelly. [6] [7]

In September 2007, Gillespie was named coach of UC Irvine's baseball team, replacing Dave Serrano, who had just guided the Anteaters to their first CWS appearance but left to take over at Cal State Fullerton, his alma mater, after George Horton left Fullerton to head the new program at Oregon. [8]

On January 8, 2010, Gillespie was inducted into the American Baseball Coaches Association (ABCA) Hall of Fame. [1]

Gillespie died on July 29, 2020, in Irvine, California. He was 80, and had suffered from lung issues and a stroke in the time leading up to his death. [5] 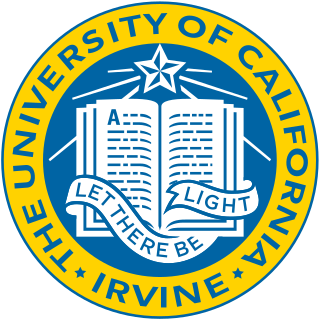 The University of California, Irvine is a public research university in Irvine, California. It is one of the 10 campuses in the University of California (UC) system. UC Irvine offers 87 undergraduate degrees and 129 graduate and professional degrees. The university is classified among "R1: Doctoral Universities – Very high research activity" and had $436.6 million in research and development expenditures in FY 2018. UC Irvine became a member of the Association of American Universities in 1996 and is the youngest university to hold membership. It is considered to be one of the "Public Ivies," meaning that it is among those publicly funded universities thought to provide a quality of education comparable to that of the Ivy League.

Chadden Michael Kreuter is a former catcher in Major League Baseball and the former head coach of the USC Trojans baseball team. He is the current manager of the Syracuse Mets in the International League.

The UC Irvine Anteaters are the athletic teams fielded by the University of California, Irvine. Its athletics programs participate in the NCAA's Division I, as members of the Big West Conference and the Mountain Pacific Sports Federation. For earlier years of the school's existence, the teams participated at the Division II level with great success as explained below.

The 2007 NCAA Division I Baseball Tournament was held from June 1 to 24, 2007. Sixty-four NCAA Division I college baseball teams advanced to the post season tournament after having played through a regular season, and for some, a conference tournament.

David Scott Serrano is an American college baseball coach and former pitcher. He is the head baseball coach at California State University, Northridge. Serrano played college baseball at Serrano formerly served as head coach at Cerritos College from 1984 to 1985 and at California State University, Fullerton from 1986 to 1987 for coach Augie Garrido. He served as the head coach at University of California, Irvine from 2005 to 2007, Cal State Fullerton from 2008 to 2011, and the University of Tennessee from 2012 to 2017.

The Virginia Cavaliers baseball team represents the University of Virginia in NCAA Division I college baseball. Established in 1889, the team participates in the Coastal division of the Atlantic Coast Conference and plays its home games at Davenport Field. The team's head coach is Brian O'Connor. The team won the College World Series championship in 2015.

The UC Irvine Anteaters baseball team is the varsity intercollegiate baseball program of the University of California, Irvine. The team's home venue is Cicerone Field at Anteater Ballpark located on campus in Irvine, California. UC Irvine baseball has been a member of the NCAA Division I Big West Conference since the start of the 2002 season which was the Anteaters' first season of play following the university's decision to revive its baseball program after the sport had been dropped following the 1992 season.

The Cal State Fullerton Titans baseball team represents California State University, Fullerton in NCAA Division I college baseball. Since beginning Division I play in 1975, the Titans have never had a complete losing season. They are supplied by Easton.

The 2009 UC Irvine Anteaters baseball team represents the University of California, Irvine in the NCAA Division I baseball season of 2009. The team plays home games at Anteater Ballpark in Irvine, California. The team is coached by Mike Gillespie in his second season at Irvine.

Dave Gorrie was a college baseball coach. He served as the head coach at the University of California, Santa Barbara from 1960 to 1977 and at Pepperdine University from 1979 to 1988. He coached the Pepperdine Wave to the 1979 College World Series, where they placed third. Gorrie finished his career as a private hitting instructor and a volunteer hitting coach at Panola Junior College in Carthage, Texas.

John Savage is an American baseball coach and former pitcher, who currently serves as the head baseball coach for the UCLA Bruins. He played college baseball at Santa Clara for coaches Jerry McClain and John Oldham from 1984 to 1986 before playing in Minor League Baseball (MiLB) for three seasons (1986-1988). After serving as an assistant coach with Nevada and USC in the 1990s, he became the head coach for the UC Irvine Anteaters (2002–04).

The 2010 UCLA Bruins baseball team represented the University of California, Los Angeles in the 2010 NCAA Division I baseball season. The Bruins played their home games in Jackie Robinson Stadium. UCLA finished the regular season as the #2 team in the Pacific-10 Conference behind the Arizona State Sun Devils. The UCLA Bruins were selected to play in the 2010 NCAA Division I Baseball Tournament as the #1 seed in the Los Angeles, CA Regional and the #6 national seed. UCLA went 5-1 in the Regionals and beat UC Irvine in the finals to advance to the Super Regionals. The Bruins beat the Cal State Fullerton Titans in three games to win the Los Angeles Super Regional and advance to the 2010 College World Series.

Ben Orloff is an American college baseball coach and former professional baseball shortstop. He is currently the head coach of the UC Irvine Anteaters baseball program. Orloff played minor league baseball for the Houston Astros organization from 2009 to 2013. He retired on June 12, 2013 and became an assistant coach for the UC Irvine baseball team, replacing Pat Shine.

Jason Gill is an American college baseball coach and former shortstop and third baseman. Gill is the head coach of the USC Trojans baseball team.

The 1960 USC Trojans baseball team represented the University of Southern California in the 1960 NCAA University Division baseball season. The Trojans played their home games at Bovard Field. The team was coached by Rod Dedeaux in his 19th season at USC.

The 1995 USC Trojans baseball team represented the University of Southern California in the 1995 NCAA Division I baseball season. The Trojans played their home games at Dedeaux Field. The team was coached by Mike Gillespie in his 9th season at USC.