Michael Joseph McCormack Jr. (June 21, 1930 – November 15, 2013) was an American football player and coach in the National Football League (NFL). He played with the Cleveland Browns from 1954 through 1962 and served as head coach of the Philadelphia Eagles, Baltimore Colts, and Seattle Seahawks. He was elected to the Pro Football Hall of Fame in 1984.

McCormack played college football at University of Kansas and assumed that he would take up a career as a high school coach. He was selected by the New York Yanks in the 1951 NFL Draft, but had to wait until the third round before being taken. After the 1951 season concluded, he was conscripted into the U.S. Army and served in the Korean War. While he was away, the Yanks moved to Dallas and became the Texans, which folded after just one season.

McCormack came home in 1954 to find that his team had ceased to exist, so he became a free agent and was immediately signed by the Baltimore Colts, a new franchise created the previous year to replace the defunct Yanks/Texans. Cleveland Browns founder Paul Brown had not forgotten seeing McCormack play in his rookie season three years earlier and was sufficiently impressed that he decided to add him to the roster in a trade exchange with Baltimore. In his first season with the team in 1954, he played on the defensive line, and famously grabbed the ball out of Lions QB Bobby Layne's hands (in what the referees ruled as a fumble recovery) in the 1954 NFL Championship game against the Detroit Lions, helping set up an important early touchdown.

The following season, he was shifted to offensive tackle and helped the Browns once again capture the NFL title. He played a key role in helping legendary running back Jim Brown become one of the dominant players in the game, ending his career with six selections to the Pro Bowl.

Paul Brown, legendary Cleveland Browns founder, owner, and coach, stated in his 1979 memoir, PB: The Paul Brown Story, "I consider (Mike) McCormack the finest offensive tackle who ever played pro football." [1] [2] Also, according to Paul Zimmerman's 1984 book, The New Thinking Man's Guide to Pro Football, Brown also stated that McCormack was the best offensive lineman he ever coached. [3] The book states that McCormack "[c]ould handle the Colts' Gino Marchetti better than any tackle in the game. Power combined with great intelligence and 4.8 speed. 'I've seen him have games,' former player and NFL executive Bucko Kilroy says, 'where if you were grading him, he'd score 100. Not one mistake, and his guy would never make a tackle.'"

McCormack retired from playing in 1962 and began coaching with the first of four consecutive stints as an assistant in the annual College All-Star Game. In 1965, he was hired as an assistant coach with the Washington Redskins, spending the next eight seasons working under four different head coaches, including former teammate Otto Graham from 1966 – 1968.

After four years as offensive line coach with the Cincinnati Bengals from 1976 through 1979, [6] he was selected over Frank Kush and George Welsh to succeed Ted Marchibroda as head coach of the Baltimore Colts on January 17, 1980. The ballclub finished in last place at 5–11 in each of the two seasons prior to McCormack's arrival. [7] When the Colts fell from 7–9 in 1980 to 2–14 the following year, he was fired on December 21, 1981, and replaced by Kush the next day. [8] As McCormack put it, "I wanted to be like my mentor, Paul Brown. He was a great teacher and I tried to do the same but unfortunately I always let my emotions carry me away."

In 1982, McCormack joined the Seattle Seahawks, eventually becoming president and general manager. That year, the Seahawks lost their first two games, then a 57-day players strike ensued. During the hiatus, seventh-year head coach Jack Patera was fired in mid-October and McCormack took over as interim head coach. [9] [10] He led them to a 4–3 record, the only time he compiled a winning record as an NFL head coach, but Seattle did not qualify for the 16-team postseason. McCormack then returned to his management position when the Seahawks hired Chuck Knox as their new head coach in 1983 and declined all further offers to become a head coach.

In late January 1989, he was abruptly fired by the new Seahawks owner, Ken Behring, who explained the decision was necessary in order to make changes in the financial operations of the team. [11] [12] Later that year, McCormack became a consultant for Jerry Richardson and his ownership group that were seeking to land an NFL expansion team in Charlotte, North Carolina. In 1993, he was hired by the newly-formed Carolina Panthers as their team president and general manager, and their inaugural season was in 1995. He retired from the Panthers organization in 1997, which erected a monument in their stadium honoring him.

The 1996 NFL season was the 77th regular season of the National Football League and the season was marked by notable controversies from beginning to end. Most significantly, the Cleveland Browns relocation controversy resulted in a then-unique legal settlement where the Cleveland Browns franchise, history, records, and intellectual property remained in Cleveland, while its players and personnel transferred to Baltimore, technically to a new league franchise that was named the Baltimore Ravens.

The 1991 NFL season was the 72nd regular season of the National Football League. It was the final season for coach Chuck Noll. The season ended with Super Bowl XXVI when the Washington Redskins defeated the Buffalo Bills, 37–24, at the Metrodome in Minnesota. This was the second of four consecutive Super Bowl losses for Buffalo.

The 1983 NFL season was the 64th regular season of the National Football League. The Colts played their final season in Baltimore before the team's relocation to Indianapolis the following season. The season ended with Super Bowl XVIII when the Los Angeles Raiders defeated the Washington Redskins 38–9 at Tampa Stadium in Florida.

The 1982 NFL season was the 63rd regular season of the National Football League. A 57-day-long players' strike reduced the 1982 season from a 16-game schedule per team to an abbreviated nine game schedule. Because of the shortened season, the NFL adopted a special 16-team playoff tournament; division standings were ignored for seeding. Eight teams from each conference were seeded 1–8 based on their regular season records. Two teams qualified for the playoffs despite losing records. The season ended with Super Bowl XVII when the Washington Redskins defeated the Miami Dolphins 27–17 at the Rose Bowl stadium.

The 1976 NFL season was the 57th regular season of the National Football League. The league expanded to 28 teams with the addition of Seattle Seahawks and Tampa Bay Buccaneers. This fulfilled one of the conditions agreed to in 1966 for the 1970 AFL–NFL merger, which called for the league to expand to 28 teams by 1970 or soon thereafter.

James Arthur Zorn is a former American football player and coach. Zorn was a left-handed quarterback, and is best known as the starting quarterback of the Seattle Seahawks for their first eight seasons. He was the quarterback coach for the Seattle Seahawks from 2001 until the 2007 season. Before the 2008 season Zorn was originally hired by the Washington Redskins to serve as offensive coordinator. Two weeks after being hired, he was promoted as the team's head coach.

Theodore Joseph Marchibroda was an American football quarterback and head coach in the National Football League (NFL). He spent his four years as an active player with the Pittsburgh Steelers and Chicago Cardinals (1957). He was later head coach of the Colts in two different cities and decades, first in Baltimore during the 1970s and then Indianapolis during the 1990s. Upon joining the Baltimore Ravens in a similar capacity in 1996, he became the only individual to serve as head coach with both of Baltimore's NFL teams. His career coaching record was 87–98–1 (.470) and 2–4 in the playoffs.

Mike Solari is an American football coach and former player. Solari has previously worked for five other NFL teams, including a stint as offensive coordinator of the Kansas City Chiefs from 2006 to 2007. He played collegiately as an offensive lineman at San Diego State University.

John Arlen Patera was an American football player and coach in the National Football League. He played for the Baltimore Colts,Chicago Cardinals, and Dallas Cowboys, and was an assistant coach for the Los Angeles Rams,New York Giants, and Minnesota Vikings. Patera was the first head coach of the Seattle Seahawks, with a career head coaching record of 35–59–0 (.372), all with the Seahawks.

Roger Dale Carr is a former National Football League wide receiver who played mainly for the Baltimore Colts. He was selected to the Pro Bowl after the 1976 season, during which he caught 43 passes and led the NFL in both receiving yardage with 1,112 yards, and yards per catch, at 25.9 YPC.

Ryan Grigson is an American football executive who is the senior vice president of player personnel for the Minnesota Vikings of the National Football League (NFL).. From 2012 to 2016, he served as the general manager of the Indianapolis Colts.

John Eugene DeFilippo is an American football coach who was last the passing game coordinator and quarterbacks coach for the Chicago Bears of the National Football League (NFL). He played college football at James Madison University, and has served as offensive coordinator for the Cleveland Browns, Minnesota Vikings, and Jacksonville Jaguars.

Barkevious Levon Mingo is an American football outside linebacker who is a free agent. He played college football at Louisiana State (LSU) and was drafted by the Cleveland Browns sixth overall in the 2013 NFL Draft. He won Super Bowl LI with the New England Patriots.

David Caldwell is an American football executive who is a personnel executive for the Philadelphia Eagles of the National Football League (NFL). He previously served as the general manager of the Jacksonville Jaguars from 2013 to 2020. Prior to that, he worked for the Carolina Panthers, Indianapolis Colts, and Atlanta Falcons. 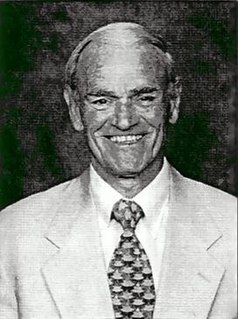 Harold Theo Hunter Jr. was an American football coach. He participated in football, wrestling and track at Canonsburg High School in Canonsburg, Pennsylvania. He played college football at Pittsburgh, where he was a three-year letterman at offensive guard and linebacker. Hunter earned Associated Press Honorable Mention All-American honors for his senior season in 1955. He was also a three-year letterman in wrestling at Pittsburgh. He signed with the Pittsburgh Steelers in 1956. Hunter was a football coach at various high schools and colleges from 1956 to 1976, mainly serving as his team's offensive line coach. He was then the head coach at California State College from 1977 to 1980, accumulating a record of 9–30–1. He began his professional coaching career as the Hamilton Tiger-Cats' offensive coordinator in 1981. Hunter later served as an assistant coach for several National Football League (NFL) teams from 1982 to 1992, including a one-game stint as the interim head coach of the Indianapolis Colts in 1984.